I am trying to repair a broken toy car (a Bee-bot to be exact).

Each of it's two motors controlled by H bridges. One of the motors runs correctly both forward and reverse. The other motor runs only forward.

I believe the schematic is as such (for one motor): 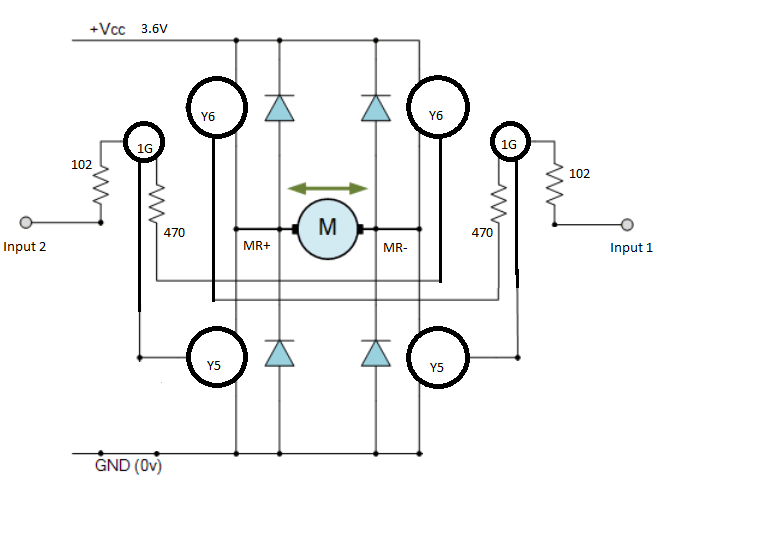 I do not know what Y6, Y5 and 1G is but I assume they are transistors.

Since it has two identical bridges (one for each motor), with one of them working, I can easily compare them.

The signals are confirmed to be accurate low or high, and the motor is running fine in both direction with powered by another source.

When input is applied to input 1 on the GOOD bridge (motor runs fine), I get these voltages:

When input is applied to input 1 on the BAD bridge (motor does not run), I get these voltages:

Testing the Y5 near MR- as diode with multimeter between MR- and 1G reads 0.06V in both directions - i.e. it looks bad. Testing the other three Y5's on same pins gives expected readings of ~0.6-07V in one direction, UL in other.

Input 1, input 2 are logic compatible. Caution: a logic "high" on both will turn on all transistors, and kill them (or your battery). Only allow one of these inputs to go high. When both are low, the motor should be off.

0
Using single microcontroller PWM output for 2 h-bridges
0
Transistors are closing slower than opening - will it be problem in H-bridge?
2
Identify a component inside an RC car. Dual H Bridge?
4
Anything wrong with this Mosfet H-bridge?
1
Reducing H-bridge inputs for multiple motors with same direction
1
H-bridge topology question
0
Full-bridge or half-bridge for a DC motor