I've been struggling with getting CAN bus transmission to work properly. I'm driving the setup with a Parallax Propeller board and the specifics are in another post, but I have a more specific question about the CAN bus wiring and termination:

Each source I've found that describes CAN bus termination does so with something like the top of the diagram shown below - a high and a low wire with 120ohm resistors at each end.

However, in my lab setup what I actually have is equivalent to the lower part of the diagram shown - the resistance is actually in the "middle", between the two devices. I've also tried playing with that resistance value, from taking it off entirely, and around 110ohms, as well as 220ohms and they all suffer from the same problem and the chip I'm using is reporting a transmission error.

Two 120ohm resistors in parallel should be the same as 60ohms resistance. But does the actual position of the resistors along the wire matter? The devices are physically about 6 feet of wire apart and it's running at 500Khz. I know some basics including Ohms Law, and I get that CAN uses voltage differential to transmit, but if the position of the resistors is what is wrong then there's definitely something I don't understand about how this circuit is supposed to work. 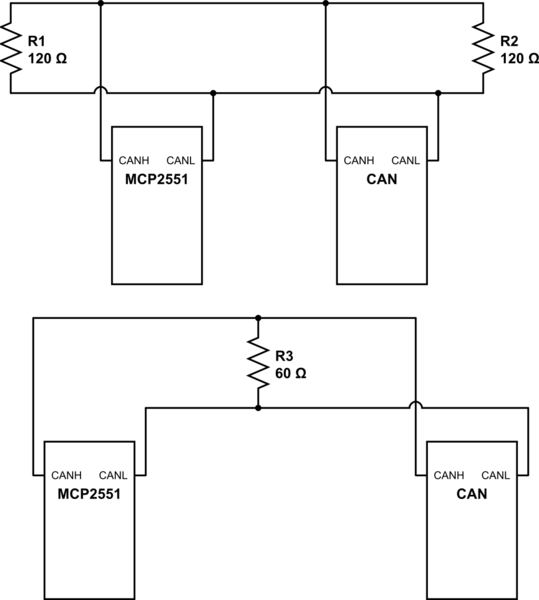 The intent of the resistors at each end of the bus is to control transients due to time delays. The bus needs to be terminated with its characteristic impedance at each end.

However if the bus is only 6 feet long I would expect your implementation with a 60 ohm resistor in the middle to work. I expect you have some other problem.

You may need to put another normal CAN node on the network to get the correct response.

Not the answer you're looking for? Browse other questions tagged can bus termination or ask your own question.

2
MCP2515, CAN bus, and transmission failure

27
SPI Bus Termination Considerations
7
Most efficient way to handle addressing / termination in a daisy-chained CAN bus?
14
Is a ground/common needed for proper CAN bus communication?
2
MCP2515, CAN bus, and transmission failure
4
SPI bus multi-slave termination
3
The CAN bus in this vehicle has only one 120 ohm termination resistance. What problems would this provoke?
3
CAN bus split termination impedance - no 60 ohm resistors?
1
Automatic CAN bus termination