Can I use FET input capacitance to store a charge for some time?

I am new to EE but I see that FETs such as the FQP30N06L have an input capacitance of 800pF. Can that be used to store a charge for some time?

The goal is to push a momentary button to power on a Raspberry Pi and after about 60 seconds detect on a Pi GPIO input that the power button was pushed. And because it is solar-powered, a requirement is to minimize the current in use when the Pi is not powered. Power on events could be hours apart.

The circuit powers on a power control latch via a FET gate. This latch starts the Pi booting. The circuit also feeds voltage into the gate of another FET which would start current flowing. After the Pi is booted, I want it to read the state on the second FET to determine if the power button was pressed. (The Pi could be started via other means so I need to be able to determine what started it.)

It doesn't work on Falstad, but I'm not sure if that's because of a limitation there; they don't have a parameter on FETs for input capacitance. 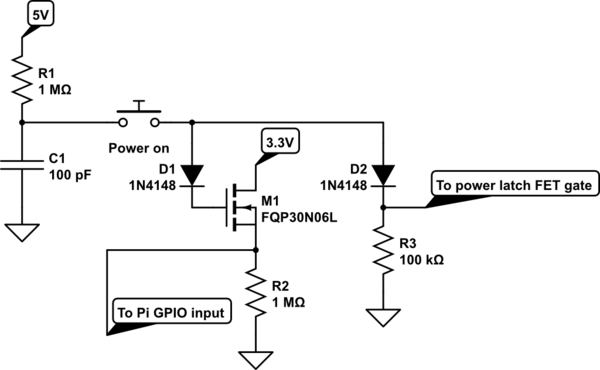 Why don't you just forget the fet and charge a 100 nF capacitor up? It seems that M1 is bringing nothing to the party but complication. Once charged via the diode, it will hold that charge for long enough to read then, you switch the GPIO to an output and discharge it ready for next time. Why all the complexity and uncertainty of the fet?

If you are worried about the cap charging to 5 volts and hurting the lower voltage GPIO then use a charge potential divider before the diode and maybe a 1 kohm in series to the GPIO line.

You will need a low leakage diode to have a good chance of achieving this. Ballpark wise, assuming the 1N4148 to the gate leaks ~8nA consistently around 5V and down we can make a ballpark calculation using the capacitor equation and the parameters of the MOSFET. $$ I(t)=C \frac{dV}{dT} $$ If we set I=8nA, Vd=0.7 (diode drop), Vgs=2.5 we can calculate that once you remove the switch the MOSFET will be on while the gate voltage discharges from 4.3V to 2.5V or over a span of 1.8V.

Solving for dT we get dT=0.18 seconds. Not alot, so you will need to find a lower leakage diode. Even then this will be highly dependent on temperature and device variations of both the diode and the MOSFET. So dont do this if you want accuracy. But you might find something that leaves you ballpark around 60 seconds at room temperature with the correct component choices.

As someone pointed out, for this to work the design would need to be converted to ground the source and use it as a inverter.

Can I use FET input capacitance to store a charge for some time?

Yes. The length of time will depend on the circuitry, the leakage, the construction, and factors that impact those conditions. You can easily try it with real parts.

Not the answer you're looking for? Browse other questions tagged capacitor mosfet fet or ask your own question.

4
Microcontroller soft off circuit not working - why?
1
MOSFETS +/- Voltages? Which to use?
1
High Side Switch Flicker during Power Up
3
Arduino Self Power Circuit
0
Start/ stop 5v motor from headphones jack
0
Momentary Switch NAND Latching IC Burning and (Possibly) Faulty Logic
0
FET-based H-Bridge for bi-color LED
1
FETs or NPN transistors open at 0V at base in CircuitLab or is something wrong with my circuit?
3
Heat Dissipation Calculation for MOSFET