I am driving a BLDC motor using a 6-step commutation table at a 40kHz PWM frequency and I am at a loss choosing the optimal one. I understand that the max frequency depends on the motor's R/L ratio and the MOSFETs's dead time.

According to my motor's datasheet:

What's the relationship between these numbers and the max frequency?

I am even more confused regarding the MOSFETs' dead time. Is it the sum of the turn on delay time and the rise time? I am presuming that the PWM period can't be smaller than it, is this correct?

L/R determines the minimum PWM frequency. To avoid excessive power loss the L/R time constant should be much longer than the PWM period, so that most of the voltage is dropped across the inductance rather than the resistance. It also smooths out the current flow, which lowers peak current and reduces losses in other parts of the circuit.

Taking your motor as an example, the equivalent circuit looks like this:-

At 50% PWM the motor receives an average voltage of 24V. As it spins it generates a voltage which is slightly less than 24V due to voltage drop across its internal resistance. When SW2 is switched on current builds up in the inductance, and when it switches off the current decays as the magnetic field collapses. The L/R time constant is 81.1uH / 0.0686Ω = 1.18ms. At 40KHz the PWM period is 25us, much smaller than the L/R time constant. 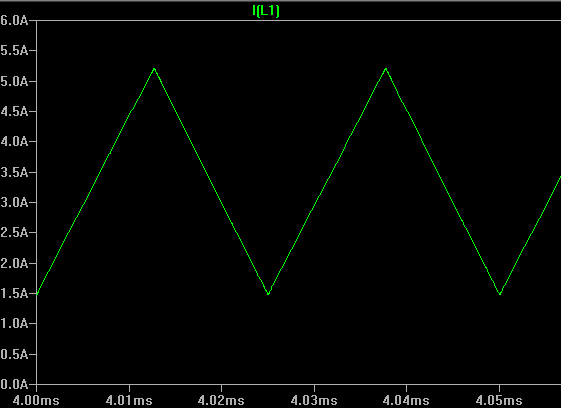 Average motor current is 3.33A, while rms current is a bit higher at 3.5A. This causes about 10% more loss in the winding resistance than a smooth DC current, which is probably acceptable.

However if the PWM frequency was lowered to 1KHz, current would climb to 120A during PWM 'on' time and drop to zero during 'off' time. To get the average current back down to 3.33A you would have to lower the PWM ratio to ~11%, and then the rms current would be 8.4A and the waveform would be a series of spikes peaking at 32A! This would greatly reduce efficiency as well as making the speed control very non-linear.

Maximum PWM frequency is generally limited by MOSFET switching losses. While switching the FETs have both voltage and current across them, so they dissipate high power. These spikes only occur for a short time, but at higher switching frequency there are more of them so average power dissipation increases. The dissipation limit is usually reached well before switching time encroaches on PWM period.

Dead time is more about turn off time than turn on time. If one FET has not turned off by the time the other one turns on then current will 'shoot through' both FETs causing very high dissipation. The FET will usually start turning on well before Gate voltage reaches maximum, and not completely turn off until below the threshold voltage. Therefore it tends to take longer to turn off than to turn on, which is the opposite of what you want. The amount of dead time required depends on how quickly the driver can transition the Gate voltage (which depends on driver strength, Gate capacitance, Gate threshold voltage and power supply voltage) as well as intrinsic FET turn on and off times.

However, dead time is really only required for 'active freewheeling' where the lower and upper FETs are switched on alternately. If PWM is only applied to the lower (or upper) FET then you effectively have 100% dead-time. During 'off' time the upper FET's body diode takes over the job of recirculating current through the motor. This is slightly less efficient because the diode drops ~0.7V whereas a turned on FET drops 0.1V or less. In a high voltage system this slight voltage loss is hardly significant, but it does cause the upper FETs to heat up a little more.

Not the answer you're looking for? Browse other questions tagged pwm power-electronics brushless-dc-motor or ask your own question.