I am currently a Mechanical engineering student and I am trying to create a device that will balance two weights by moving the fulcrum between them. The whole thing looks like a see-saw with a motor and gyroscope attached, mostly because that's exactly what it is. 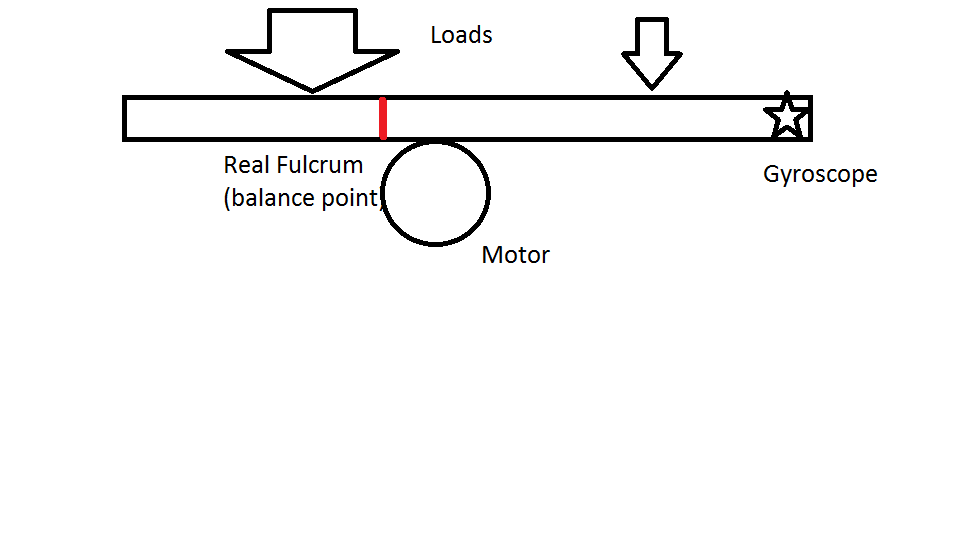 The problem I am having is getting the motor to move the board to place its center of mass above the motor in order to balance the load. The motor has a large gear on it that meshes with a linear gear across the bottom of the board. I am using an arduino mega to control a Spark motor controller using PWM. My first idea was to simply measure the angle from the gyro(between -4 and 4 degrees) and activate the motor whenever it did not read 0 degrees(level). This threw the board off of the motor. Later I decided that a PID loop would be a better solution. I wanted to have something like this video shows. https://www.youtube.com/watch?v=fusr9eTceEo The problem is that as far as I know, PID only works in one direction. A gas pedal in a car is a good example because the PID loop can only give more or less gas and cannot hit the brake pedal. In my case I need two PID loops in order to control the position both left and right. Currently I am running the two loops side by side using the Arduino library with the angle as the input and the motor power as the output. I take the difference between the outputs and the resulting positive or negative value goes to the motor. I really don't think this is the right way to do this as I still cannot even balance the board itself. What do I need to do in order get the right motion?

Chris is correct and PID commonly operate to give positive and negative outputs - even your car cruise control example is out of data, modern radar controlled cruise controls can indeed operate the brakes as well as the throttle. A more general example is called a servo. Small scale ones are used for models.

Here is another example of an Arduino using a PID loop to balance a beam in a different way:

There's nothing about a PID loop that restricts it to positive values. The inability to use negative numbers is a limitation of the throttle, not the PID controller. Try the math.

Lay it's tipping left. That means \$e(t)\$ is negative. \$K_p e(t)\$ is then negative, and \$ K_i \int e(t)dt \$ is decreasing, and will become negative if it isn't already. We'll ignore the derivative term because you might not need it.

Thus, \$u(t)\$ is negative or is tending towards negative, which will shift the fulcrum to the left.

Not the answer you're looking for? Browse other questions tagged pid-controller or ask your own question.