Without math you can't go so far, though....

If you have a periodic signal, you can try to localize the main harmonics (sinewaves) composing the signal; each periodic signal in the real world can be approximated by a sum of sinewaves. And even in this case you are computing a very elementary form of Fourier series decomposition.

Without some math, you can't extract much meaningful information from a time-limited signal.

There is a little exception, though: you can let a spectrum analyzer or the math function of the scope to do the work for you. It can still be useful for several tasks, but if you don't understand the mechanisms, you could get stuck in front of something magic that you don't know how to read.

In any case, frequency based analysis any application of electronics, especially when involving signals analysis, without a minimum of math gives very poor results.

Conversion from time domain to frequency domain on sight is nearly impossible. There are some facts that will help you get an idea, though.
Fourier says that any periodic signal can be represented as a sum of sines, each with its own phase and amplitude. The frequencies are multiples of the fundamental frequency. So if you look at a periodic signal you know that you'll have equally spaced lines in the frequency domain. 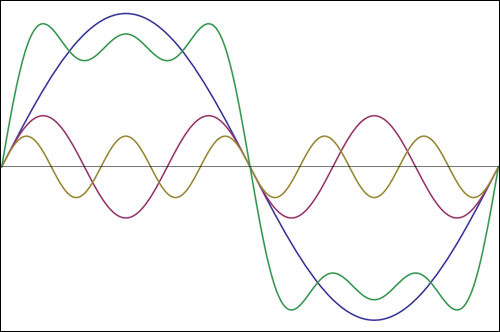 This graph shows how you can approximate a square wave as the sum of sines. The approximation (the green curve) is not very good, but then it's only composed of three harmonics. Look at the zero crossing in the middle. All the harmonics have a negative slope here, which gives a steep slope in the resulting signal. Adding more harmonics will make it steeper. An ideal square wave will have infinite steepness, and you'll need an infinite number of harmonics to achieve this. You'll always have an infinite spectrum if you have infinite steepness in your curve.

If your curve isn't periodic you can pretend it does, though with a very low frequency, let's say 0.00001Hz. In that case harmonics will have frequencies of 0.00002Hz, 0.00003Hz etc. This means that the spectral lines will be very close together. In fact the frequency will be even lower, and the spectrum will be continuous, no more separate lines.

An interesting property of the square wave is that it contains only odd harmonics, so the amplitude of the 2nd, 4th, 6th etc. harmonic is zero. That's not just true for a square wave, but for all signals showing point symmetry: 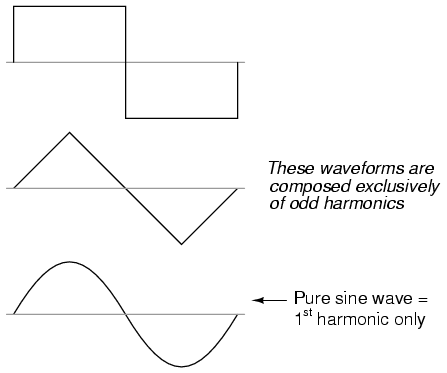 Asymmetric signals will also have even harmonics: 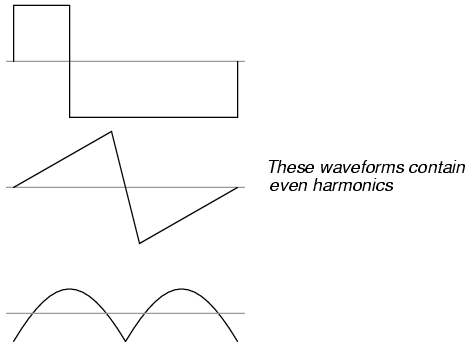 edit
OP wants a few examples of a waveform with its frequency spectrum. 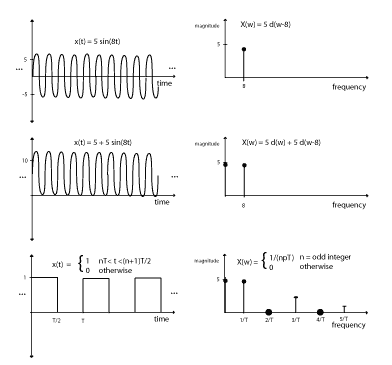 The top graph is a sine, so there's only one frequency, one vertical line in the frequency domain. The second graph is the same, but with a DC offset. Now we get two lines, one at 0 Hz (the DC component) and the one at the sine's frequency. The third graph shows a square wave, also with a DC offset. In the frequency domain we see again a line at DC, and then an infinite number of lines at multiples of the fundamental frequency. I explained that symmetrical waveforms don't have even harmonics, so the lines at \$2 \times f_0\$, \$4 \times f_0\$, \$6 \times f_0\$, etc. have zero height (the dots on the frequency axis). The relative amplitudes of the harmonics determine the waveform, and for a square wave these are 1/3 for the third harmonic, 1/5 for the fifth, 1/7 for the seventh, etc. You can see that the lines decrease in height if you move further to the right, to higher frequencies.

Not the answer you're looking for? Browse other questions tagged dsp or ask your own question.

3
How to calculate power from this diagram?

6
Meaning of phase in Fourier Transform of audio signal
5
What are the origins of the window functions in DSP? Why not just use a rectangular window?
1
What to look for in a processor for a DSP project
4
How can I high pass (DSP) filter a low frequency signal without introducing lag?
1
Best Approach Methods for Signal Processing
1
frequency doubler on fpga
4
What is the meaning of my fourier transform results?
3
Understanding the DTFT
3
Understanding digital filters, specifically their effects on time domain information, how to preserve the waveform of a signal being filtered?
1
Continuous, frequency-domain digital equalizer