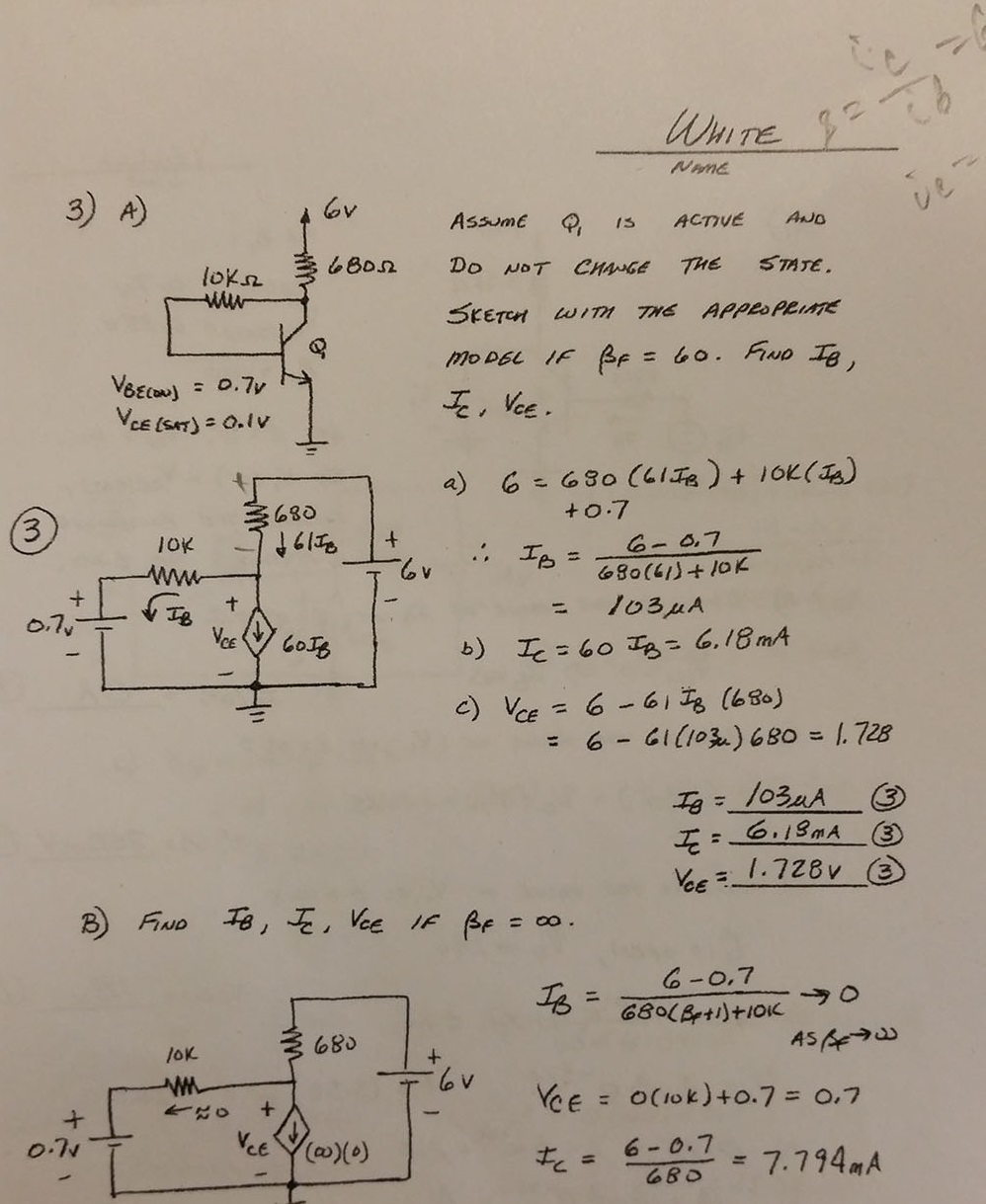 For the B) part, I don't get why is it that for calculating voltage between collector an the emitter (Vce) I take into account diode on base (0.7V), whereas for part A) it's ignored?

Why is Vce in part A and part B are calculated differently? Why is it that in part A voltage of 0.7V isn't taken into account? I get that if βf = infinite, and βf = ic/ib ib -> 0

Your answers look great. I don't see a problem with them. They are even rounded, appropriately. (Except, perhaps, the part A collector voltage.)

So part A doesn't ignore it. Neither does part B.

The reality of a BJT is a little different. The next improvement to your approximate viewpoint is to realize that the collector current and the base voltage are related by something called the Shockley diode equation. So the "diode voltage" isn't a fixed value, as you assumed.

That equation uses some model parameters you weren't provided: an emission co-efficient (usually just 1) and a temperature-dependent saturation current. Plus, two physical constants (Boltzmann's constant and the constant representing the basic unit of charge) that, with temperature, provide a "thermal voltage" value resulting from large-number statistics applied to the energy distributed over the degrees of freedom at the atomic/molecular level.

For most practical uses of discrete devices, you don't even need to get to the first level of the Ebers-Moll model. Just the Shockley diode equation is often enough for most practical applications for discrete devices. Not so, for IC design use. But at the level most of us normal mortals live in, it's enough. However, it's too often not enough to ignore the Shockley equation. So it would be good to take note of that much when you get the time to consider it.

I add the above because the question comes from the physics stack exchange and it seems appropriate to give you some notice.

B) As β goes to ∞ and Ib goes to 0 then it no longer is linear and Vce is saturated where in this case Vce(sat) = Vbe or Vbc=0 so different rules apply.

B) is purely hypothetical , because when Vce goes towards saturation β drops as much as 10% of the linear value and datasheets rate Vce(sat) for some rated current. Vce(sat)=0.1V is never reached with the negative feedback from Collector to base or ANY value of β.

For the B) part

the rest is simple.

7
Transistor with two voltage levels, Vb ≠ Vcc
12
Switching 9V using a NPN transistor and an Arduino
0
Designing transistor logic gates
1
Why is the voltage across collector and emitter pushing itself to 0.7 volts?
0
Gilbert-Cell Operating Point
2
Anomalies while using transistor as switch
1
Why does the base-emitter voltage in NPN transistor become constant?
6
Art of Electronics 2.5 - Transistor saturation
0
High dV/dt turning on BJT switching Circuit due to Miller capacitance