Why is diode D2 affected by the current of Vin and the choice of R1? 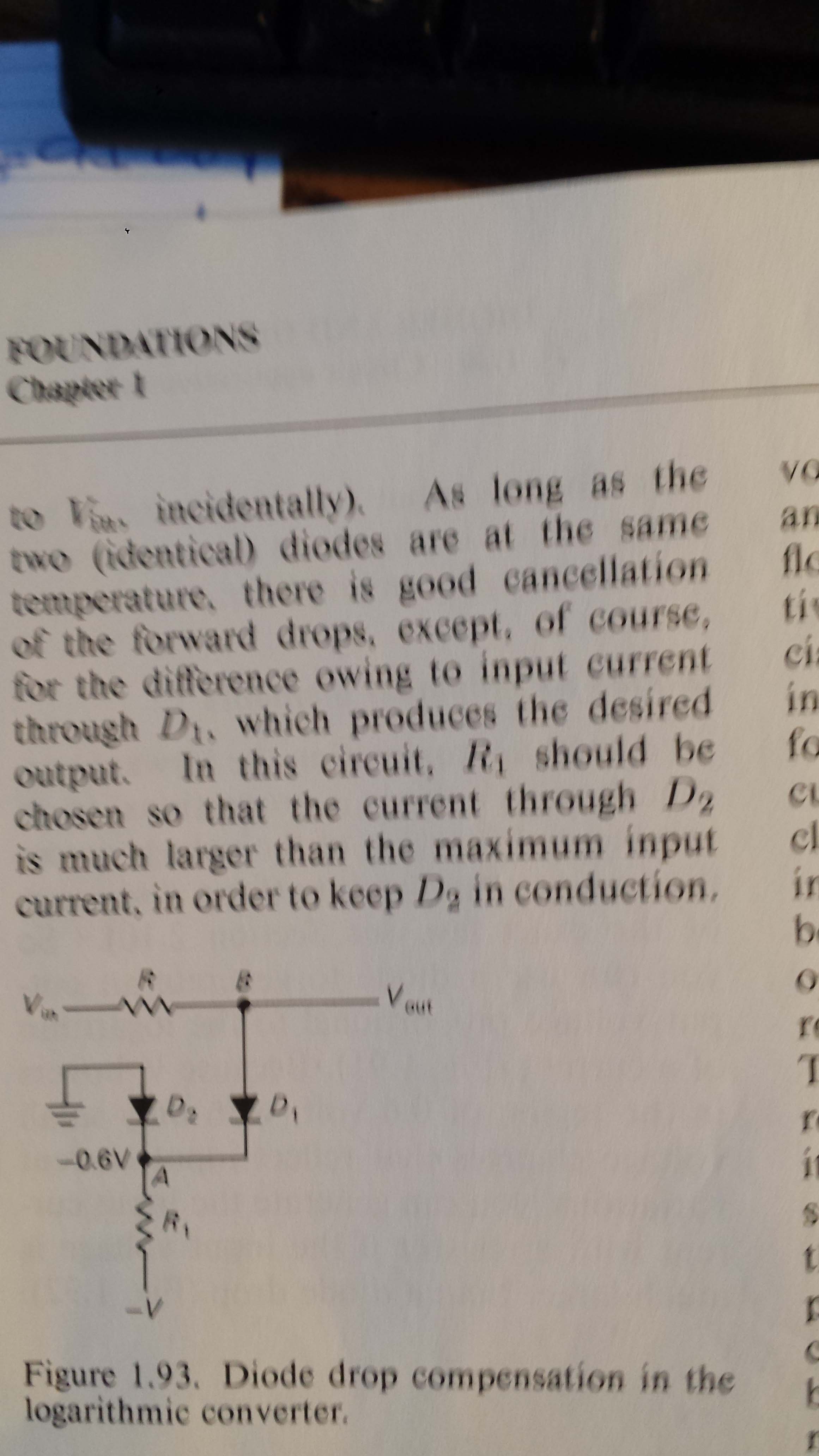 I was wondering why D2 will not always forward voltage drop .6 volts? Ground is at 0. What happens if R1 is incorrectly chosen? Could too much current through D1 push back on D2 and prevent flow from ground through it? I would think you will always get current through D2, just not as much under some circumstances, and compared to D1. Since you get current through D2, you should always be .6V at A... so .. why the extra concern with R1.. Thanks for any help

First you have to understand that real diodes are not switches. They are actually complex, non-linear, voltage controlled resistors.

Lets look at this in steps...

When Vin = 0V, if R1 is small enough there is enough current through D2 to allow it to pass the knee in the diode V/I characteristic so it "turns-on". That is, it presents itself as a low resistance. This can be measured as somewhere around 0.6-0.7V drop across D2, if it is a silicon diode. What that voltage actually is depends on how much current you pass through the diode, and is shown as the Vin = OV bias point on the curve below. 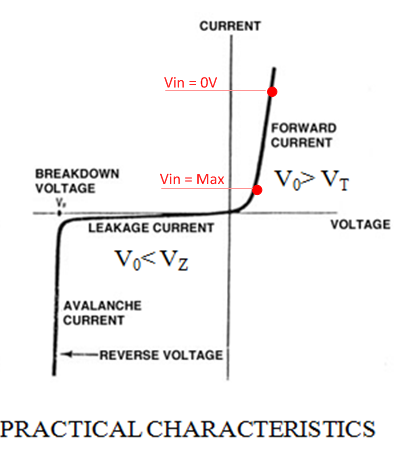 D1 on the other hand is biased below the knee when Vin=0 due to the current limiting of R. When Vin=0V the voltage from Vin to the bottom of D1 will also be the voltage across D2. However because R is in that circuit, the current flowing through D1 is a lot less than that passing through D2.

As Vin increases the effective resistance of D1 falls exponentially as Vin increases. This draws more current through R and attenuates the signal.

At some point, the voltage across D2 will fall low enough that the bias point will move below the knee in the diode's I/V characteristic and it will begin to show a higher and higher resistance. At that point the circuit no longer works as intended.

For this circuit to work as intended it is required that D2 be "biased" far enough up that forward current curve to give it sufficient margin to allow the current to drop and still keep it in the on-state up to the expected maximum signal voltage (Vin).

This is done by selecting the appropriate value of R1.

I was wondering why D2 will not always forward voltage drop .6 volts?

Then if D2 were still forward biased, there would be 3.6 V forward bias on D1, indicating a contradiction in your model.

What actually happens is if a high enough voltage is applied at Vin, D1 becomes forward biased, with its current also flowing through R1. By Ohm's law, at some point the potential across R1 becomes enough to raise node 'A' above -0.6 V, and D2 is no longer forward biased.

Not the answer you're looking for? Browse other questions tagged voltage current circuit-analysis diodes basic or ask your own question.

1
Zener diode forward voltage
4
Understanding current, voltage and resistance
4
Why doesn't current flow through the common part of a circuit?
2
Lower than 0.7-0.6V voltage drop on sillicon diodes
1
Op-amps, their impedance and current flow
0
Recommend the correct diode
1
What is Maximum Average Forward Rectified Current? (1N4001 Diode)
1
Designing a circuit that opens when less than 12 volts are applied and closes when more than 12 are applied
0
How do protection diodes work?
1
Eliminating millivolt-level reverse current flow with diode or other