A recent question on here asking about how to calculate the accuracy of a circuit got me thinking about calibration in general.

In particular, as EEs we routinely use volts and amperes as a unit and yet these are both rather vague and hard things to quantify.

It used to be that a volt was defined by a "standard cell" kept locked up in a vault somewhere, but that changed to using the "Josephson voltage standard" which is a complex system that uses a superconductive integrated circuit chip operating at 70–96 GHz to generate stable voltages that depend only on an applied frequency and fundamental constants.

The latter is not exactly something one could throw together in a basement, or even in the test engineering departments in most companies.

The Ampere is worse. It is defined in SI as "That constant current which, if maintained in two straight parallel conductors of infinite length, of negligible circular cross-section, and placed one metre apart in vacuum, would produce between these conductors a force equal to 2×10−7 newtons per metre of length."

I have NO IDEA how anyone could measure that.

The ohm used to be defined by a specific height and weight of mercury, but that was abandoned in favor of being a derived unit from 1V and 1A.

Is there some sort of intermediate standard of measures or equipment you can buy to use as calibrated references for 1V, 1A, and 1R? (Obviously you only need any two of those.)

Bonus question: Is there some sort of certification sticker one should look for when buying a meter or other equipment that indicates it is indeed tested to the actual SI values vs tested against, say, a Fluke?

Is there some sort of certification sticker one should look for when buying a meter or other equipment that indicates it is indeed tested to the actual SI values vs tested against say a Fluke...

You have described precisely what happens. You don't need to have an exotic, expensive, "golden standard" in your company's in-house lab, as long as you have certified calibration traceability (if you need it) down to an accredited lab that actually has it.

And yes, they actually put in your instrument a sticker issued by the accredited lab, with the date of expiracy of the calibration validity on it. I've seen it myself.

In-house, you'll find yourself in one of these situations: 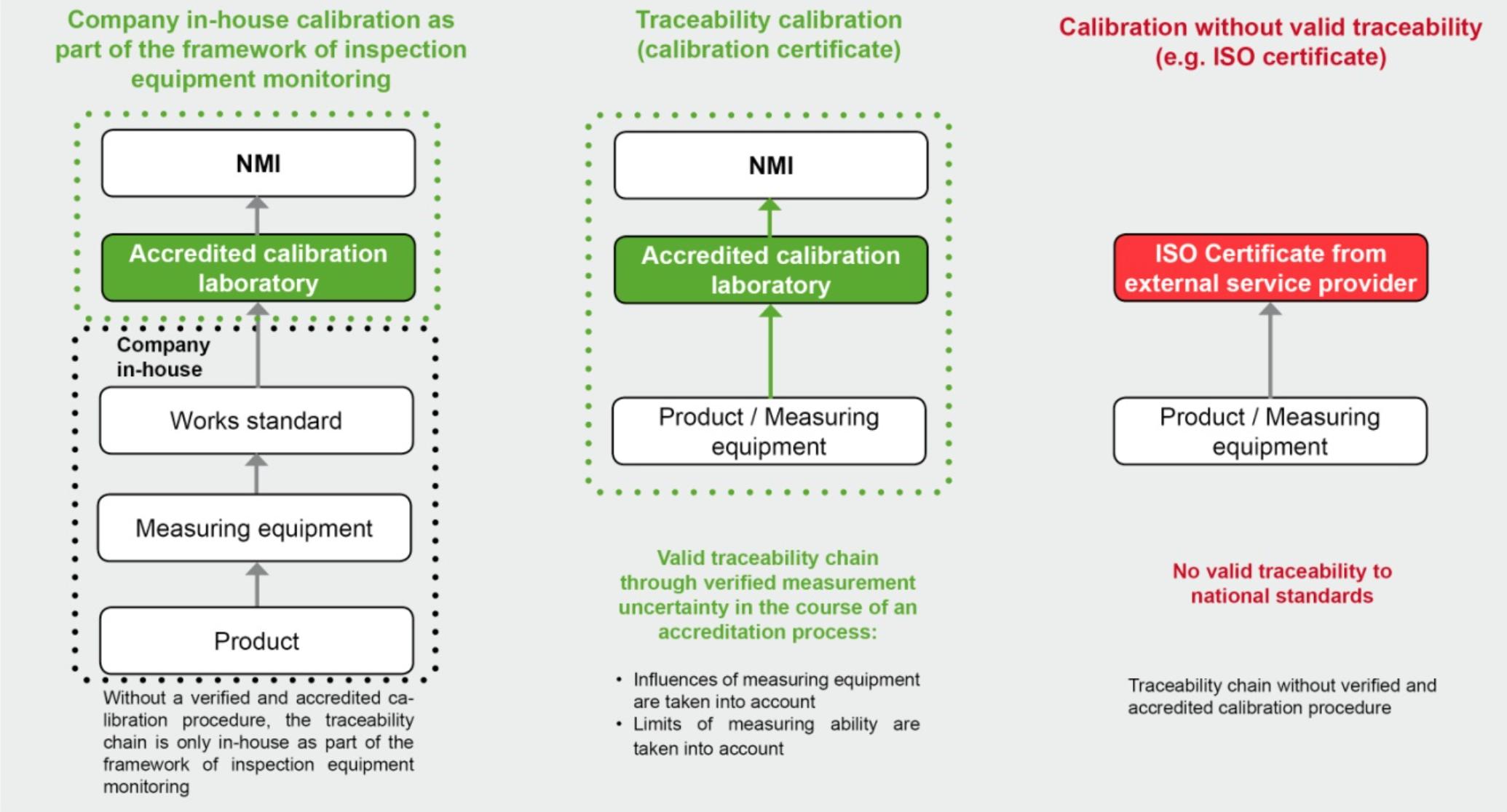 I recall that when I was working in the aerospace industry we were required to have all measurement instruments calibrated, with their sticker and traceable calibration certificates and associated documentation. The test procedures ("work standards"), instruments to be used, and their calibration traceability, all were required to be exhaustively documented and submitted for customer approval well before any actual delivery testing was performed on the product.

Of course, every industry has its own requirements and quality levels. I don't think anyone can reasonably expect that a Chinese manufacturer of cheap multimeters has such a calibration program in place, because it wouldn't make sense to them or to their customers.

Back to the traceability chain: the NMIs in the figure above are the National Metrological Institutes. The NMI for USA is the NIST. A closer look at the "food-chain" of metrology is illustrated in the figure below, in case you wonder: 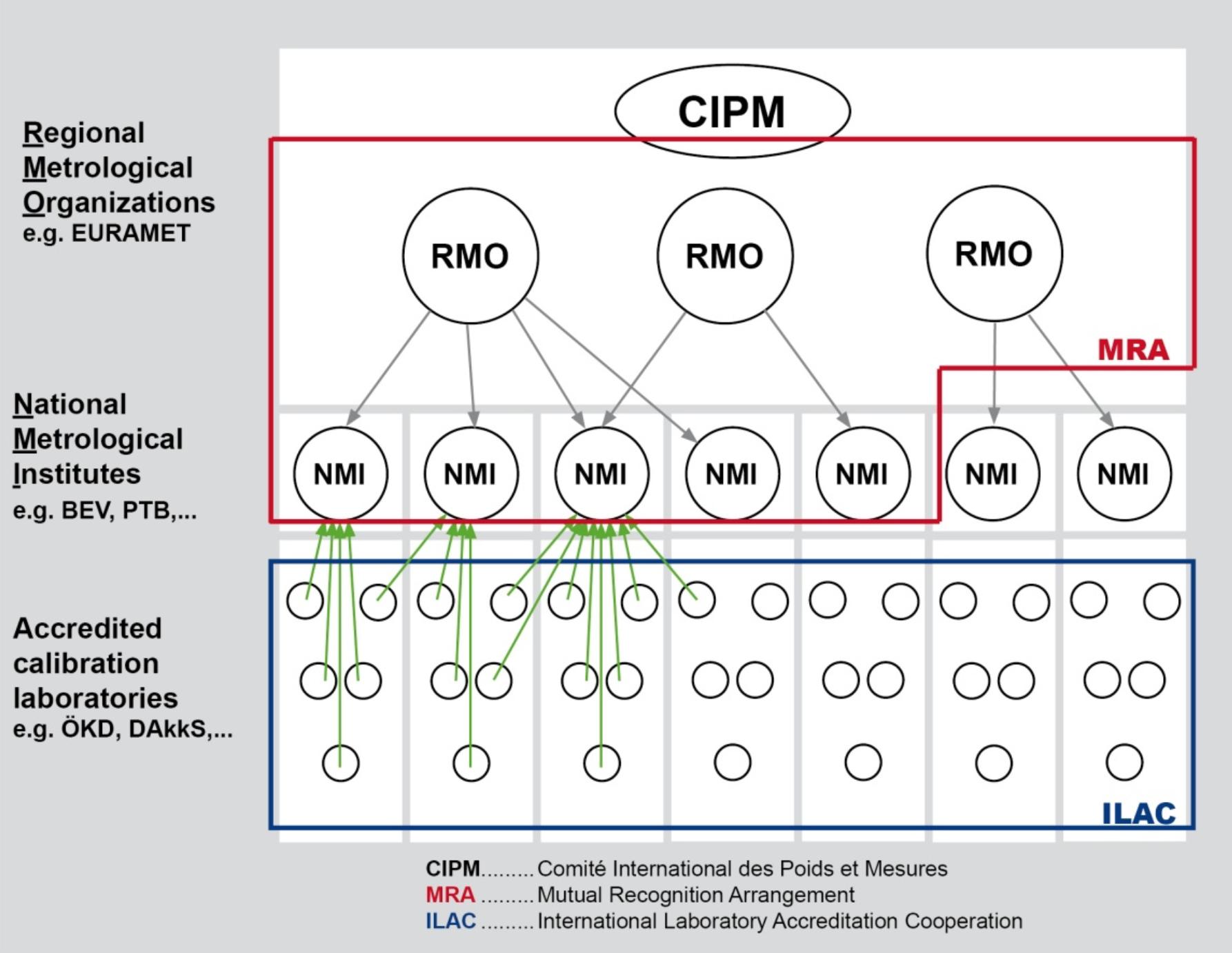 Source of images: Calibration and traceability in measuring technology

If you don't order this certificate, your instrument will likely still be tested with the same procedures, but the vendor won't take on the liability of keeping records of that test and its results.

I know that in my industry, our customers do regularly audit our manufacturing site and check that all instruments used on our test line have traceable calibration certificates.

vs tested against say a Fluke...

This could still be a traceable calibration, if the Fluke has a valid certificate. Of course each step away from the primary standard increases the possible errors propagated from measurement to measurement, reducing the accuracy you'd be able to claim for the instrument being tested.

At the top of the metrology heap are the reference standards owned by the national standards laboratories. And these are indeed mainly only tested by comparison with each other. For example, NIST verifies the accuracy of its atomic clock by comparing it with the atomic clocks maintained by the British Standards Institution, the Association Française de Normalisation, the Chinese National Institute of Metrology, etc. This is because when you're making the most accurate instrument in the world for some measurement, the only thing there is to compare with is other people's attempts to produce the same thing.

The label you want is "traceable to NIST" (in the USA, at least).

The National Institute of Standards​ and Technology maintains primary standards, and all other standards (at calibration labs, etc.) are periodically checked against them, either directly or indirectly. If you care about the absolute accuracy of your instruments, you will have documentation that describes all of the steps by which your calibrations can be traced all the way back to NIST. This would include what transfer standards or instruments were used, along with how long ago each one was checked against the next higher standard up the chain.

Not the answer you're looking for? Browse other questions tagged amperage standard calibration electrical volts or ask your own question.

7
Standard enclosure sizes?
2
What's an industry standard in electrical engineering?
5
Who sets "standard component" standards?
0
combicon connector capacity rated as 300 volt 15 ampere, how much maximum current it can draw for 240 volt and 120 volt AC?
1
How is it possible, with 2 "20 AWG" cables each capable of 2 amps, for one to give 0.4A to my phone and the other 0.7-0.9A?
0
How can I calbrate my power meter?
1
Meaning of DO-254 Standard
0
what is 1 volt and 1 ampere? May sounds very basic but its deep. please help