I might be asking for too much with this one, but I hope it is out there. I would like a fuse that can be reset, but not automatically. I need to be able to know that the fuse is blowing and with a thermal fuse it will just start back up after it opens. I would also like to be able to change the value in case it doesn't open in time or opens too often. I need something low around .25 amps up to 1.5amps, and this is going to happen often so I don't want to use glass fuses because of the cost. Has anyone seen anything like this? Perhaps a circuit? Or has anyone seen some test gear that has these features that I can use on the motor until I find out exactly where it will safely blow. It needs to be small because of where the motor is mounted. Thanks very much, Russ

It is a 12VDC motor. At the moment I don't have the circuit diagram available.
I don't think it matters if the fuse is at the low or high side.

Sometimes the motors stop switch does not work and it cause the motor drive train to jam and grind down some brass gears. When it jams the current goes up from about 10mA to 30 to 40mA and this is why I need some way to stop the motor.

Hopefully there is a fuse or circuit breaker available that will meet this need.

Comment on any of these if more detail is anted:

Easy enough electronically, and I'd recommend an electronic solution - but a relay with at least either 1 x changeover contact or 1x make and 1 x break contact will do this. Relay is rated at lowest value current that you want. Place a wirewound pot of suitable rating in parallel to desensitise it by shunting some of the current.

Electronic: A foldback current limiter will do what you want. When current exceeds a trip point the circuit adds resistance until some lesser value is reached. This can be latching.

Example from here - at bottom of page. Circuit explanation given on that page. 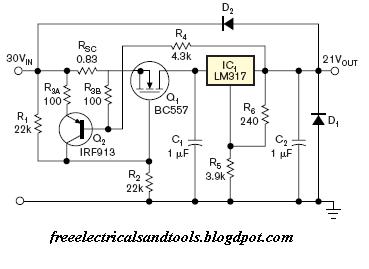 Measured and calculated performance (from their site). 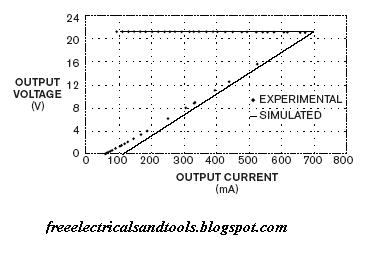 A circuit that powers itself completely off when a set current is exceeded is also "easy enough".
eg Placing a diode in series with R4 in the above circuit so the diode conducts when LM317 output is low, and lowering the value of R4 to around a few hundred ohms would probably make the circuit fully latching. May not then start well - may need a little thought to tidy the result.

I drew up a circuit before I saw the above which does much the same but removes the latch and uses a MOSFET. It uses 1 x opamp section, 1 x MOSFET, 1 a voltage reference (or a zener with less precision), 5 or 6 resistors, a diode and a pot to set trip level. Turnoff is complete and instant on exceeding Itrip and it latches off. Trip delay can be added with one capacitor and operation can be switched to constant current limit by opening the diode circuit. Can draw (slightly) more tidily and post if needed.

Here is their circuit.

Second circuit on page here.
This too can be made to latch off. 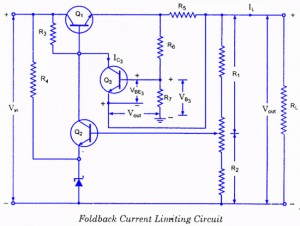 Just using a constant current source may suffice - so that current can not go above some preset limit.

Hot Swap ICs sometimes implement functionality, which you are describing. For an example, see TPS2421-1 . It has an integrated FET*. \$\overline{FLT}\$ and \$\overline{PG}\$ pins can tell about the stasus of the "fuse". \$\overline{EN}\$ can reset the fuse. \$ISET\$ can sets the trip current.

What's the voltage? Is it AC or DC?
If the voltage is DC, does it matter if the fuse is at the low side or high side of the motor?
Will the fuse serve just the motor? Could you describe your motor driver circuit?

8
what size of copper wire can act as a 150A fuse?
7
Resettable Fuse: Do they have a “Reset” limit?
1
How can I protect against shorts in low voltage AC ~16V
2
Use a relay as a resettable fuse?
1
AC resettable fuse
0
Electronic fuse
0
PPTC Resettable Fuse
0
How to choose the correct fuse in a double paralled battery supply system?