I have a 1k pull-up resistor on an input line of a microcontroller on an automotive part.

The signal is coming from another product in the vehicle which is meant to deliver 12V. In this case one might think that the current will be 12mA through the pull-up and hence the power will 144mW so maybe a power rating of 250mW would be appropriate for the resistor.

However, in automotive, there can be very large transients and if the signal becomes noisy or the other product which communicates with our device has a defective or badly designed filter (over which I have not control), it's possible there could be some large transients on the signal line. 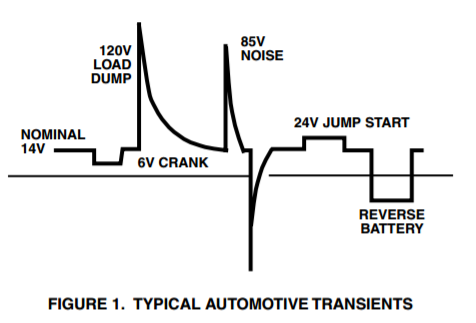 Independent studies by the Society of Automotive Engineers (SAE) have shown that voltage spikes from 25V to 125V can easily be generated [ref], and they may last anywhere from 40ms to 400ms. The internal resistance of an alternator is mainly a function of the alternator rotational speed and excitation current. This resistance is typically between 0.5Ω and 4Ω (Figure 2).

Does anyone know if the power rating of pull-up resistors in automotive systems are typically rated higher than normal?

Nasty voltage spikes on a car "12 V" system are real, but their average power is small.

During normal operation, your resistor could dissipate (13.6 V)2/(1 kΩ) = 185 mW. In theory, the next common size of ¼W would cover it. However, cars get hot. Take a look at the datasheet of a ¼W resistor to see how the power dissipation capability is derated with temperature.

Short spikes on the "12 V" line don't add much average power, but do represent some fixed energy per spike that the resistor has to absorb effectively instantaneously. The power dissipation capability of the resistor is mostly irrelevant. It's the thermal mass that decides how much the resistor will heat for a given energy spike.

Cars are a harsh environment. A ¼W resistor doesn't leave much margin, even at a convenient ambient temperature. I'd go with the next common larger size, which is ½W.

Not the answer you're looking for? Browse other questions tagged resistors automotive pullup or ask your own question.