I wanted to do a project where I used an LED to indicate the strength of 2.4GHz RF noise around the device (presumably mostly wifi signals). I wanted it to be super cheap and hopefully without a microcontroller, because I was hoping to make quite a few of these devices. That said, I was hoping I would be able to simply make a copper wire antenna and hook it up to an led, obviously with some components in between the two.

I've been doing some research, but I've had some trouble - I haven't been able to find the procedure for making a 2.4 GHz antenna. I saw some articles online (like https://www.techwalla.com/articles/how-to-build-a-copper-wire-antenna) that mentioned how to, but it seemed strange to me that I could just cut a length of wire and it would work perfectly well as an antenna in a circuit. Is there something I'm missing?

Also, I know that I will need some sort of amplification circuit between the antenna and the led (https://electronics.stackexchange.com/a/260600/144475 says the led's glow would be far too faint to see), but for now I'm just focusing on the antenna.

I would probably try something like the LT5504 (RF log power detector) if you need to detect a signal level from very weak to very strong. It covers the wifi range, and has a dynamic range of 70 or 80 dB.

You can use either (or similar parts) to drive an LED proportional to the RF level. You could also drive a small meter with the detector, and calibrate the whole shebang to show the real received power level.

Both cost around $10 US. May be too expensive and overkill if you just want an on (lots of RF) off (little RF) indicator.

The LTC5505 is an RF peak detector. You won't have the dynamic range, but that would be good for a simple on/off indicator of high/low RF level.

There are many similar parts from various manufacturers. I've just listed a few from my own research for an on-going hobby project.

You may also look into the circuitry used in detectors used in the little boxes they sell to help set up satellite dishes for TV reception. The circuit diagrams can be found on the internet in various places.

You might also consider just buying and using the cheapest of these gadgets - preferably one with a meter.

Satellite signals are around 10 to 12GHz, but are down converted to around 2GHz - right in the range for wifi.

Connect a 2GHz antenna to a sat detector and wave the antenna around - it should react quite well to wifi signals.

You'd probably want to modify them a bit if you plan on using them a lot. You'll want one where you can turn off or disconnect the 24Volts that normally power the LNB on the dish. With a regular antenna you run a risk of shorting the 24Volts, though you can get away with it if you are just checking to see if a sat detector is adequate to your needs.

Another thing is that they often use a version of the ancient 741 opamp to drive the meter - since the 741 output can't go all the way to ground, the meter never goes to zero. There are more modern opamps that are pin and voltage compatible that could be used to improve things considerably.

Finally, you will probably need an adapter connect the antenna to a sat detector. They have different connectors than the typical antennas for wifi. Adapters can be expensive.

Finally, to the antenna.

There are many examples of wifi antennas on the internet. Some are good, some are bad. Take a look around, find one you think you could manage to build, then ask here (new question) if the antenna design looks good.

There are also antenna design programs that can help you calculate antenna part lengths for various frequencies. Try one for a simple dipole at 2GHz and 75Ohms impedance. The programs (and online sites that have such calculators) will generally also have at least a sketch showing how the antennas go together.

There is a lot to learn when you go to building a gadget to detect/measure RF.

You can use commercially available detectors (such as the parts I mentioned above) or build your own using discrete diodes like the satellite detectors do.

Ever seen a CitizensBand whip antenna installed on bumper of a car? About 100 inches long, sticking up, tossing about in the slipstream so people often use some twine to stabilize that whip. The car's metal chassis provides "ground", sort of.

Now connect that whip, trimmed down to 1/4 wavelength for 2.4GHz, to emitter of a RF bipolar biased at 1/3mA, at which level the bipolar has Reac of 75 ohms, about what a whip finds optimal.

How much gain can you get from a wideband common-base amplifier? perhaps crudely resonate, Q of 10, to null out some capacitances. Buffer with emitter follower, into diode (RF diode, schottky) biased at 1uA or 10uA so the diode already is forward biased just a bit.

EDIT Here is a similar approach: use the common-base biased at ~~ 1/3 mA, letting the RF cause DISTORTION on purpose, to shift the operating point. 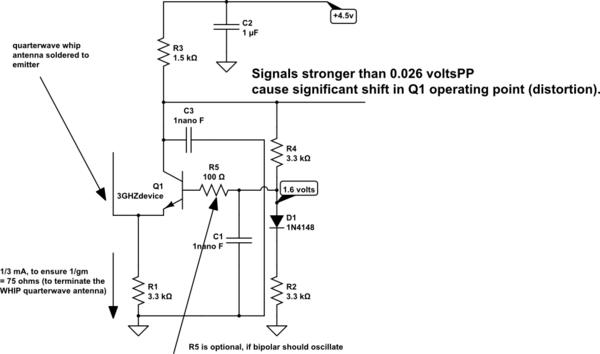 Not the answer you're looking for? Browse other questions tagged led rf antenna or ask your own question.

1
What happens if we connect a led to a monopole antenna?(on a transmitting antenna)