Choosing an inductor for a synchronised interleaved buck converter

I'm designing a 10 W buck converter. The input is around 18V, and the output is 12V at .6A (considering converter losses which I wouldn't include here). I used this tutorial to guide me through choosing an inductor. The inductor equation is $$L= \frac{(Vin-Vout)Vout}{VinFsw*(LIR)*Ioutmax}= \frac{(18-12)12}{18*15KHz*.3*.6A}=1.48mH$$ where LIR is the Inductor current ratio and it's .3. $$\Delta Il = LIR*Ioutmax= .3*.6=.18A$$ $$Ipeak= Ioutmax + \Delta Il/2=.6+.18/2=.69A$$ The tutorial instructs to follow the inductance calculated to make a selection and make sure that the saturation-current rating is higher than the calculated peak current(in this case .69A). With this in mind, I go to this supplier. I can see a 1.5 mH inductor, as I went through the datasheet questions came up. The saturation-current rating for the 1.5 mH inductor has 3 different sections, which "specify the DC current that causes the specified inductance drop from its value without current". What does that mean? Also I noticed these inductors are tested at a 100KHz frequency as opposed to my 15KHz selection. Does that make a difference? I have already ordered the 1.5 mH inductor, is it possible to utilize it by changing the frequency (maybe choose 100KHz)? I know increasing the frequency would decrease the inductor size, and don't know if this inductor selection would end up being to big (I made calculation and found the value to be .285mH at 100 KHz). Considering that I have 2 interleaved Buck converters, I'm assuming the current would be halved across both. Would that give me more head room on the saturation current limit? 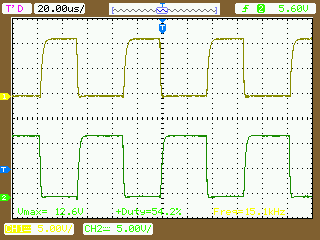 I got this waveform for the dead time 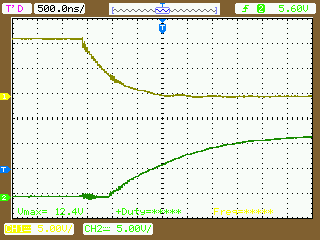 I have used the Half Bridge Driver: IRS2003(S)PbF.

As I increase the input at 18V from 0V. The waveforms above sag downwards. At 2V it exceeds the current protection limit of the supply and automatically turn of the supply. what could be wrong?

What does that that mean?

Inductance can be defined as an amount of flux developed per ampere (you can calculate by yourself from \$V_L=L \cdot di/dt = N \cdot d \Phi /dt\$). So, it is easy to think that if current increases then so does the flux. But there is a point that the flux cannot increase more. This is called saturation (remember B-H loop) it causes inductance to drop which can lead a rapid increase in current.

By the way, 15kHz switching frequency seems low to me. 40-50kHz would be nice though. So you can select a smaller inductor with higher saturation current.

Interleaved converter approach is quite unnecessary for your application but if you go for it then yeah, current can be halved for both but results in increased cost and size. Increasing the frequency to 40-50kHz is a better option.

Not the answer you're looking for? Browse other questions tagged switch-mode-power-supply power-electronics or ask your own question.