Finding the voltage of a circuit composed of a series and parallel?

I was watching a youtube tutorial to understand calculations using ohm's law and I thought I had it down when I ran into this problem:

So I did the following to find those answers:

I first wanted to find the voltage drop in the series section of the problem so I used ohm's law:

So my first answer was correct, point A had a voltage of 30V. Now I thought I could use this voltage to solve for the parallel part of the problem, but before that I thought:

Ok, so 30V going into the parallel circuit, great! so that means that since there is no voltage drop in parallel point B must be 30V as well!

Then I continued with my analysis. I wanted to find the current at the 3Ω resistor, so I used:

Using that same analysis I got the current going through the 6Ω as well, which was 5A. It made no sense to me, because I would be saying that there is a current of 15Ω, greater than the initial current. Why is my analysis incorrect? Why do I get incorrect current values for the parallel circuit using Ohms's law?

This is the video's solution to the problem: 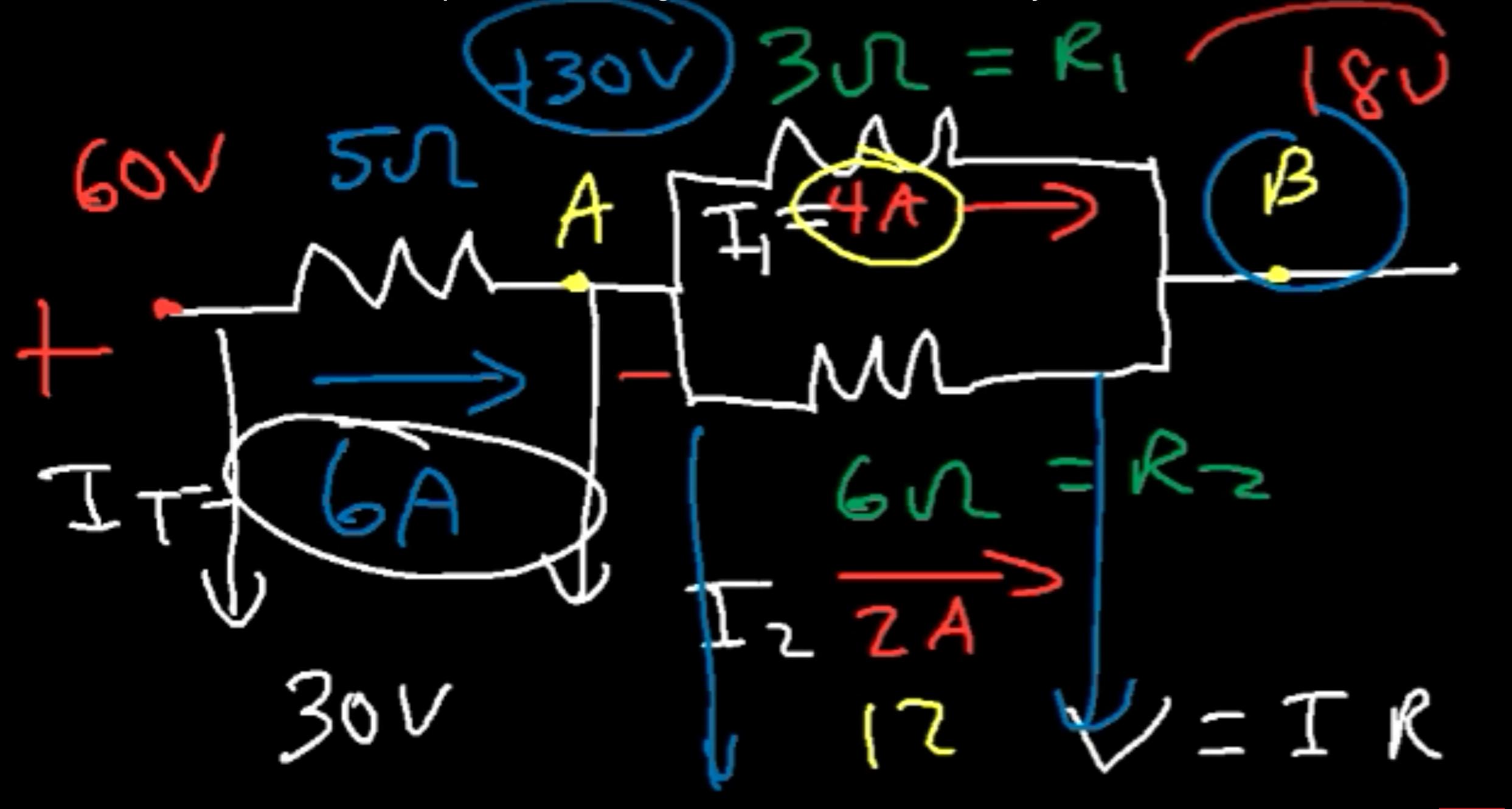 Okay. So now you are faced with a parallel arrranged pair of resistors. What happens here? Well, the current divides. Some goes in one direction and some goes in the other direction. The sum, of course, is still \$6\:\textrm{A}\$. You go about solving this one by recognizing that the voltage across these two resistors has to be identical, since they are connected at both ends. Node A can have some voltage \$V_A\$ and node B can have some voltage \$V_B\$. But node B cannot have two different voltages. Neither can node A. A node can only have one voltage. So the voltage across the \$3\:\Omega\$ resistor must be exactly the same voltage as is also across the \$6\:\Omega\$ resistor. However it is that the current divides itself (and for now, the only thing you know is that the sum must be \$6\:\textrm{A}\$), it must be the case that the voltage developed across the upper resistor must be the same as the voltage developed across the lower resistor. This voltage will be \$V_B - V_A\$. That's a simple fact.

So let's write this out:

But of course, you also know:

You can solve these two equations to find that:

Now, like everything, there are shortcuts developed when the same thing is done over and over. No one likes to go solve two simultaneous equations every time they meet a parallel resistor pair like this. So they come up with helpful rules to follow. (This is the same thing like learning your multiplication tables and long-hand multiplication -- it saves you a LOT of addition when you face a multiplication problem.)

One rule to learn is that you can replace a parallel pair of resistors with a single equivalent resistor by converting them to conductances (how much they encourage current rather than discourage it, I suppose), adding the conductances in the parallel branch, and then reconverting back to resistance, again. It's easy to convert each way: \$G_R=\frac{1}{R}\$ and \$R=\frac{1}{G_R}\$. So here you'd do the following:

Now, you can compute the voltage drop easily, just as you did in your first step in fact, as \$6\:\textrm{A}\cdot 2\:\Omega=12\:\textrm{V}\$. And knowing that, you can easily go back and figure out the currents in each of the two resistors, since you know the voltage drops across them, now.

You can even simplify the above process into the case for just two parallel resistors as:

The previous process of finding conductances is more general and will handle three, four, and more resistors in parallel. But two resistors occur often enough that the above formula is worth committing to memory.

In your second equation you are assuming B is 0V.. it is not. You need to calculate what that is.

There are two ways to do that, either combine the 3R and 6R resistors to determine the parallel equivalent and then use the first formula you used.

The circuit values given are inconsistent.

2
What determines a load's current requirements?
3
Finding node voltage of a "Y" resistor network
3
Can I use V=IR in the analysis of AC circuits?
0
Application of Ohm's law to a single resistor and to a series circuit
0
Finding the value of a specific resistor
3
How do batteries connected in parallel give more current than batteries connected in series?
1
Ohm's law and the voltage drop across a resistor
1
Finding current through LEDs in series-parallel circuit