Will I detect any signal if I apply laser light on one of the two light sensors placed in a sunlight?

I am trying to make a counter which should work in a solar light. I am thinking to use two ambient light sensors placed close to each other and use a differential amplifier. One sensor receives a RED laser light and sunlight on it. The Second sensor receives just sun-light. Therefore, I would have zero volts at the output if LASER is absent or else HIGH volts if it is present. Will this work?

I have this sensor: http://www.everlight.com/file/ProductFile/ALS-PDIC144-6C-L378.pdf (also have 5mm too)

Yes it should work, assuming the sensors are well matched. Allow for some leeway. Eg require the signal to reach a minimum difference between the sensors before outputting HIGH. If you give more info, eg purpose of system, what's driving /controlling the laser, and that your final output is used for, I could help with a circuit.

You may be able to avoid needing two sensors if you encode the laser, or at least pulse it. For example, have it pulse at 1kHz (assuming your sensors react fast enough). Then filter out signals below that, then smooth that result and add a schmitt trigger for your final logic signal. This is the idea behind how IR remote control receivers block out ambient light from interfering. The underlying frequency, eg 1kHz is called the carrier frequency.

Either way, using a light filter which blocks everything but the laser light colour could help.

Edit: I found this circuit from here which looks near perfect: 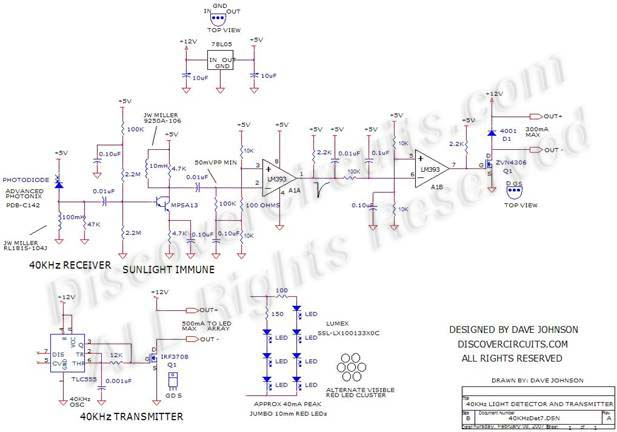 As per my comment, just ignore the components after the final op-amp and feed into the MCU instead. Then just change a few values to change the reception frequency (currently 40kHz).

Not the answer you're looking for? Browse other questions tagged operational-amplifier amplifier circuit-analysis sensor light-sensor or ask your own question.

4
How do I calculate Distance between two sensors?
3
Conveyor belt speed monitoring
0
Colour Sensor from discrete components?
1
Detecting fast laser pulses
0
Photodiode amplifier circuit
2
Detect multiple Hall Sensors on one input
20
Any better way to determine source of light by analyzing the electromagnectic spectrum of the light
0
Can a series resistor be used to limit the power consumption of a phototransistor?
2
Light sensors sensitive enough to detect for PWM from CF and LEDs?
0
What type of sensor to detect if an object passes through?