While I was reading about filter design and going through the schematics, the following two questions popped up in my mind and I could not find a satisfactory answer to them:

…and a basic second order low pass Butterworth filter as: 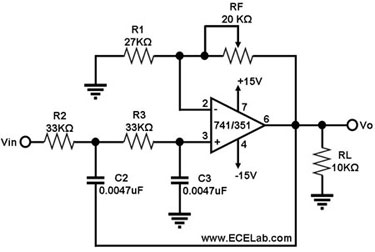 You can notionally build as many stages as you want with a single amplifier, and AFAIR I have seen a 5 stage design implemented just to make the point BUT it becomes increasingly hard to "realise" (= construct) as you add stages around a single amplifier. To obtain the correct ratios of components requires increasingly precise component values and increasingly stable components. Capacitors are hard to get with extremely high precision and resistors are only slightly better. For a two stage or 3 stage design you can in most cases manage with 1% parts. Beyond that, the fun begins.

Note: "Pole" used generally here rather than saying "pole or zero as is applicable ..." in each case.

While you will notionally get the same result from a bandpass filter by cascading stages in any order, you will find that in limiting cases aspects such as stage Q and signal magnitude will have some effect. The same applies to stage order in a multiple stage low or high pass.

Your circuits are unusual in separately providing gain for the amplifier. This is acceptable, but the norm is to use a unity gain buffer in this application - amplifier Vout connected to amplifier inverting input. The addition of gain will also affect filter Q and you will end up not realising a classic filter polynomial if you alter the gain - assuming the designer implemented a 'proper' filter in the first place. In the case of the multipole design, varying the gain arbitrarily as shown will influence the "shape" of the resultant response rather than just its amplitude.

For one and two pole designs that need a unity gain buffer, you can use a 1 transistor emitter follower with usually acceptable results. As shown below, the results with a transistor with relatively low gain are inferior to results usually available from an opamp, but can still be very useful..

Lots more on the above, and related, here - Gargoyle search.

(1) As far as a first-order circuit is concerned, there are no alternatives. Hence, the shown 1st-oder lowpass has no "Butterworth" response. The Butterworth approximation is valid for 2nd- order or higher orders only.

(2) For a Butterworth response of 2nd order you cannot simply add another RC section (in the first circuit) because - in this case - the pole distribution does not allow complex poles (necessary for Butterworth). For this reason, as shown in the 2nd circuit we must have a sort of positive feedback for realizing a pair of complex poles.

(3) For such 2nd-order lowpass circuits, there are a many alternatives with (a) infinite gain amplifiers (opamps without internal feedback), (b) fixed- gain amplifiers (as in your case) or (c) unity gain blocks. Each alternative has its pro and con. The advantage of the shown alternative with a finite and fixed gain gas the advantage of equal filter components, however it is important to have the correct gain value (therefore, the shown pot).

Not the answer you're looking for? Browse other questions tagged design filter low-pass or ask your own question.