How we can calculate the transfer function and cutoff frequency for this type of filter?

For second order low pass filter the natural frequency is:

and the cutoff frequency is:

But for this type of filter I don't know the cutoff frequency formula.

This type of passive circuit can be easily solved and expressed in a so-called low-entropy format using the fast analytical circuits techniques or FACTs. Without writing a single line of algebra, you can "inspect" the circuit and determine the transfer function. In this approach, you determine the natural time constants of the circuit by reducing the stimulus \$V_{in}\$ to 0 V. When you do that, the left terminal of \$R_1\$ is grounded. In this configuration, remove the capacitors and "look" at the resistance from their terminals. The obtained resistance multiplied by the capacitance forms the time constant \$\tau\$ we need. Here, we have two energy-storing elements (with independent state variables) so this is a 2nd-order circuit obeying the following expression for the denominator \$D(s)\$:

We start with \$s=0\$ for which you open all caps. The transfer function is simply:

If you now apply the technique consisting of "looking" at the resistance offered by the capacitors terminals while \$V_{in}\$ is 0 V, you should find:

Then, consider shorting \$C_1\$ while you look at the resistance offered by \$C_2\$ terminals in this mode. You have

Assembling these expressions, we have the complete transfer function as there is no zero in this network.

This is a second-order polynomial form obeying:

If \$Q\$ is sufficiently low (low-\$Q\$ approximation) you can replace the second-order polynomial form by two cascaded poles. All appears in the below picture: 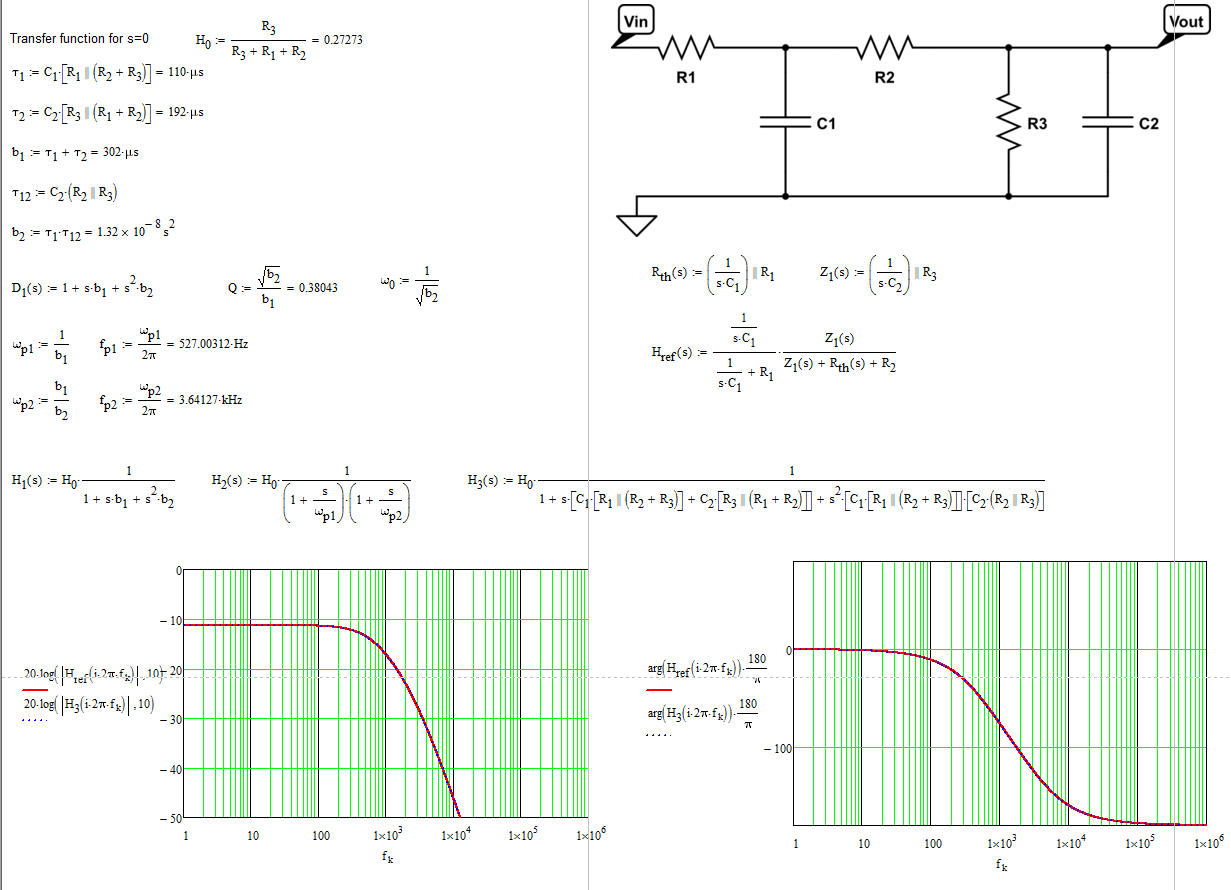 If you look at the raw expression transfer function \$H_{ref}(s)\$ (using Thévenin), it perfectly matches the low-entropy version. The difference is that you now have a well-ordered transfer function letting you calculate the values for all components depending on how you want to tune this filter. What truly matters is the low-entropy well-ordered form which tells you what terms contribute gains (attenuation), poles and zeros. Without this arrangement, there is no way you can design your circuit to meet a certain goal. To my opinion, the FACTs are unbeatable to obtain these results in one clean shot. Furthermore, as you can see, I have not written a single line of algebra. All I did was inspecting the network (through small individual sketches if necessary).

You can discover FACTs further here

and also through examples published in the introductory book

Since you only have one type of energy storage component, the capacitors, and resistors, all the poles and zeros of this circuit will be on the negative real axis. That is because the best you can do with only one type of energy storage element is to have alternating poles and zeros on the negative real axis. This means there is no damping and no natural frequency. In other words with no inductors there is nothing to resonate.

A simple technique to solve this type of circuit is to assume Vout is 1. It is easy to get the currents through R3 and C2 now. Add these currents and multiply by R2. Add this to 1 and you have the voltage at the top of C1. Now you can get the current through C1. Add C1's current to R2's and C2's and multiply by R1. Add this to the previously calculated voltage and you have Vin. Use this to get the transfer fuction Vout/vin. The frequency where this function is 0.707 is the cuttoff.

Not the answer you're looking for? Browse other questions tagged transfer-function cutoff-frequency or ask your own question.