I am a bit confused about the operating voltage of LED's.

I have an RGB led controller that uses 12VDC.

I looked up a RGB led on mouser such as this one:

What I really don't get is what if I was using 36VDC or 1000VDC? Even if I sized up the resistor appropriately wouldn't the LED be damaged at some voltage? How do I tell where that voltage is in a datasheet that does not specify?

The most important thing to understand is that LEDs (if considered simplistically) drop a constant voltage of somewhere between 0.7 - 5 volts. In the datasheet this is shown as the forward voltage as 1.9 for the red and 3.3 for the green and blue leds.

Your calculation is not quite correct because you did not take the forward voltage of the LEDs into account. So for example, if you want 20 mA through the red LED you need to go:

But often LEDs are driven by current sources rather than limited by a resistor which is probably what your LED controller is doing but you haven't provided a link for that.

Not correct. Most LEDs run from 2.3Vdc up to 4Vdc, it depends on the electronic construction of the substrate. That is true for One only Light Emitting Diode. Most manufacturers will sell LED modules. These are made of several LED connected in series and or parallel and may include internal balancing resistors and some other diodes for rectification and even more complicated regulation scheme involving multiple transistors. that is why some of those modules are working of completely different voltages like 12V or 24V or even 36V and even 120VAC. See Wikipedia "LED".

As for your second question: 36VDC or 1000VDC? When connecting LED modules always follow the manufacturer specification for if you inject a 36Volts into a 24Volts module, the module may draw much more current then intended and will overheat and sooner then you wish it will permanently stop functioning.

On a more electronic point of view, if you work with a single electronic device LED and need to run it on a 12Volts DC source you would have to calculate the value of a current limiting resistor as follow: typical LED Voltage = 3Volts, Source = 12 Volts, 12-3=9 volts drop needed. Typical LED current consumption 0.02Amp, 9V/0.02A = 450 ohms. Then you would need to construct a series circuit with one LED and one 450 ohms resistor. This would consume a total of 0.02A into a sum resistance of 600 ohms. The LED would light up and will likely last for some 100000 hours if treated properly.

Use Ohms Law' on the R drop difference voltage.

Learn to read the specs and recognize the ESR. Vth (threshold asymptote and Vf forward voltage at rated current. (e.g. 20mA for 5mm) ( not the Absolute Maximum) exceeding this may fuse gold wire up burn chip. 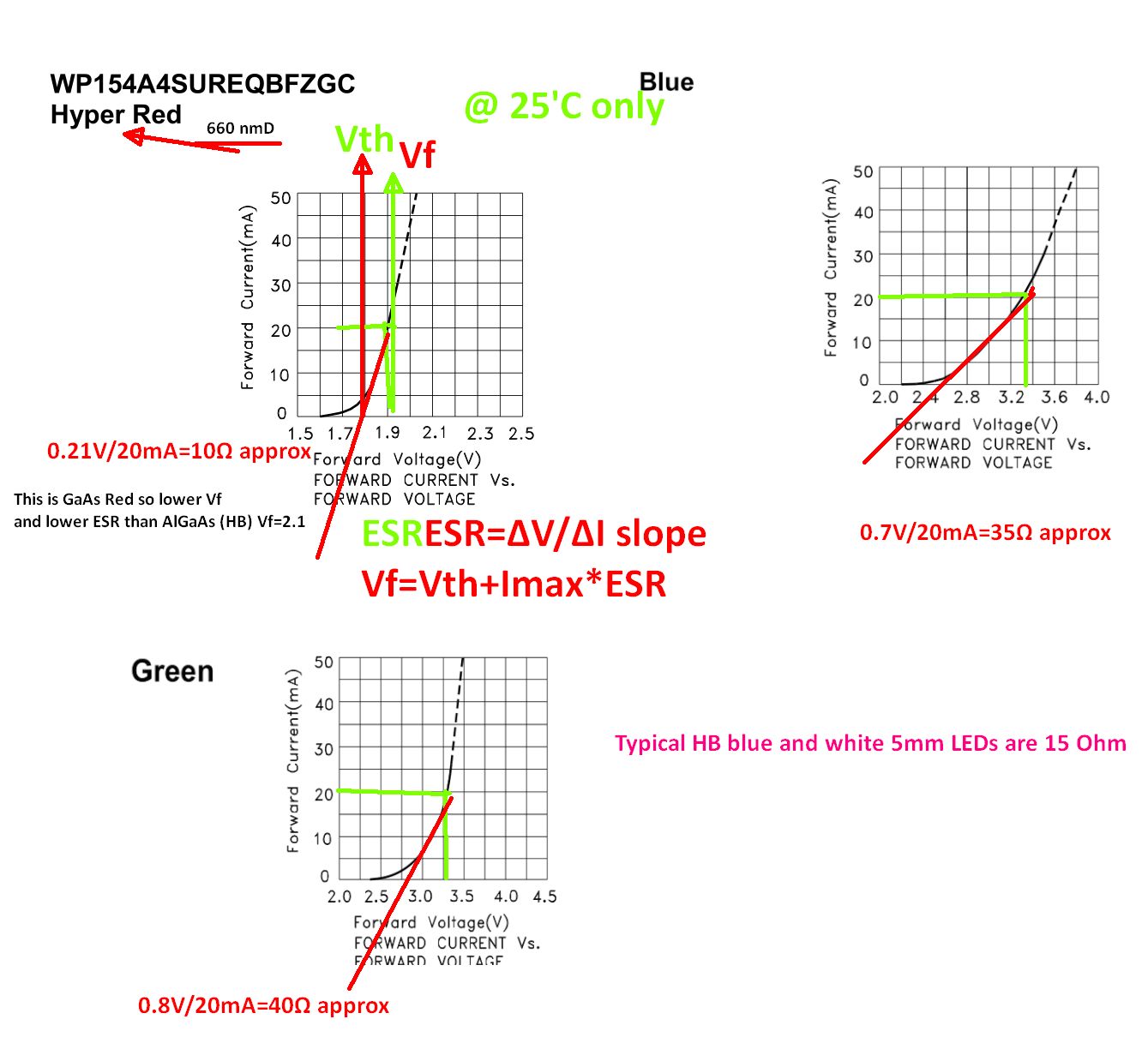 Not the answer you're looking for? Browse other questions tagged led diodes datasheet or ask your own question.

8
What would the current be if I plug an LED into a perfect circuit
0
How to adjust red brightness on MAX7219 with RGB LED
6
Max voltage vs current for LED
1
Minimizing PCB size of a 192 RGB LED array
0
Is resistor on LED's necessary after voltage drop?
7
Changing the resistor to be in front or behind an LED doesn't affect brightness?
14
LED forward voltage is a range, so how do you calculate resistor value?
4
Calculating the resistance required to limit current in order to prevent diode burnout - I can't make sense of this textbook problem
2
What's the difference between typical and maximum forward voltage for an LED?
0
Transistor driving LED