I would like to know is there any standard on placing capacitor on a pcb board. For example, in front of a power supply 3.3V, I put 100p, 10n, 10u, and 1n. How should I put it in the correct order from the nearest to the furthest from the specified pin. Is there any standard in this kind of placement. If possible can you attach a source to further increase my knowledge. I myself put it in order of 100p,1n,10n,and the furthest is 10u, however I do not really know whether this is correct or not. Thank you for your help.

I've seen a lot of my fellow students and friend that are into electronics struggle with this, so I decided to type out a quite lengthy response - I hope people looking for similar information might find help in this.

We need to start with an understanding of what the decoupling capacitor is actually used for in the first place - many people will say that it is to filter out noise from other components. This is not the main/only reason, especially in digital circuits! If we have say a CMOS circuit, we will find that most of the current draw happens in very brief spikes on the clock. If we have no decoupling, this current will have to flow through the trace coming from the powersupply. This trace has a resistance R and inductance L. I have a schematic down lower where you can see these. When you have a sudden spike of current through this combination, we will have a large voltage drop over this trace, causing issues ranging from noise on mixed signal circuits, jitter on clocks, to complete failure of the device requiring a reset.

Now, on to the question:

It is a very common mistake to think that it's only the capacitance value that matters. The key is the combination of Equivalent Series Inductance (ESL) and capacitance. The equivalent schematic used in this post is the following:

In this schematic, C is the rated capacitance. ESL is the equivalent inductance. This depends on the capacitor design, size, and type.

We often see something like this on our schematic: 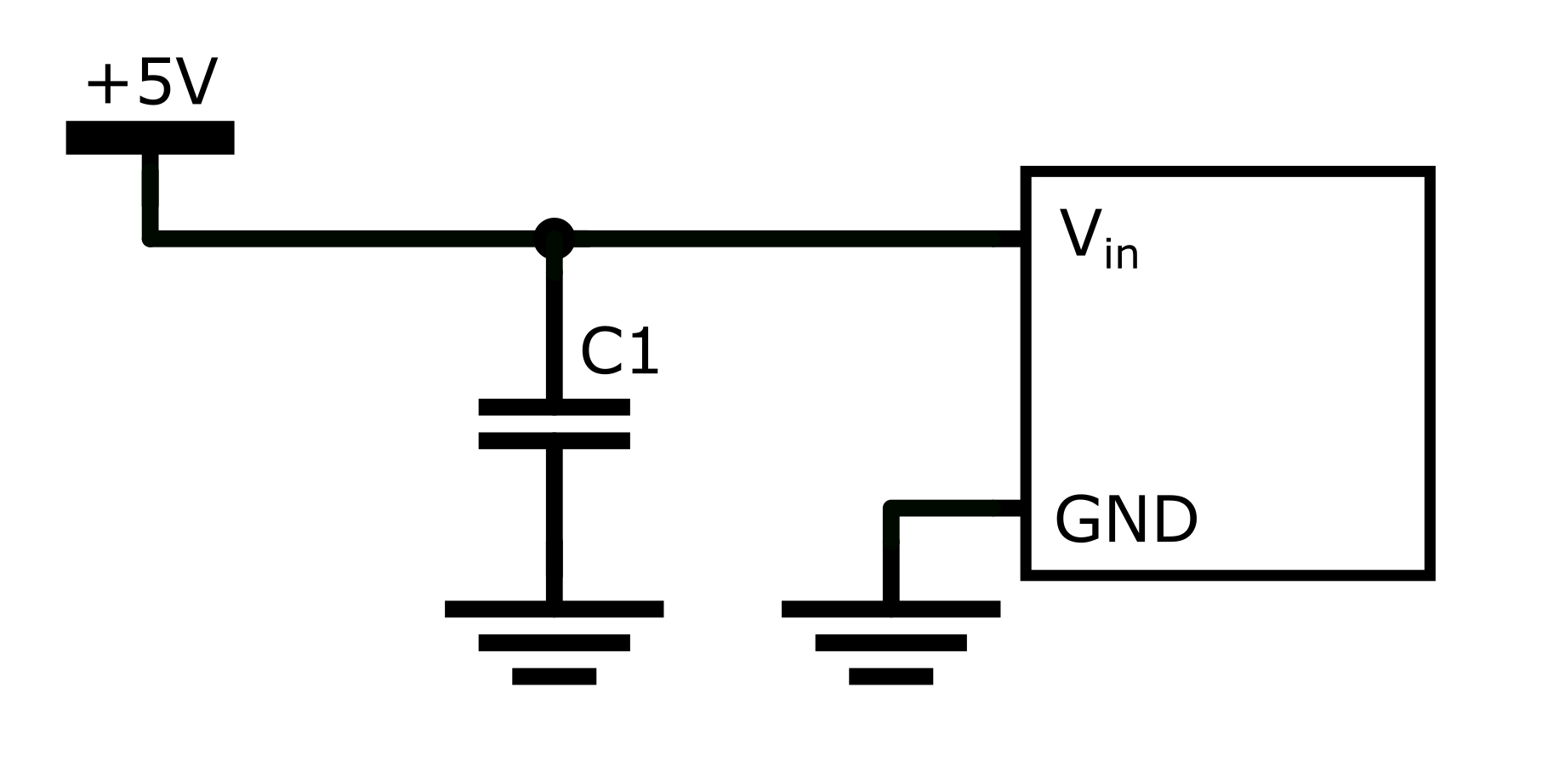 When we place this on the pcb, it looks like this: 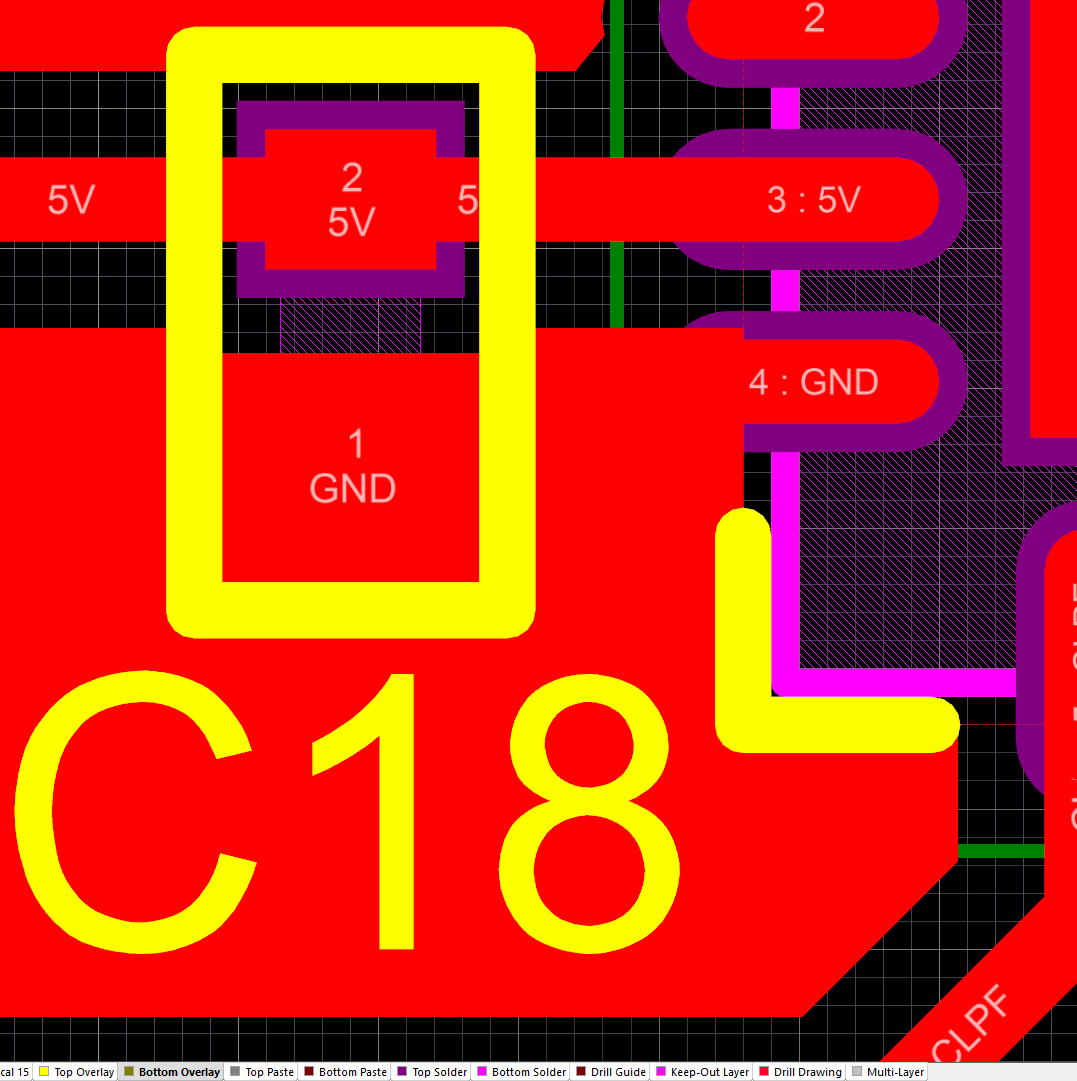 But when we look at the main non-idealities, the picture becomes more complex. We first need to replace our ideal capacitor with the circuit including the ESL. On top of that, we need to include the trace resistance and inductances. Our simple schematic is now: 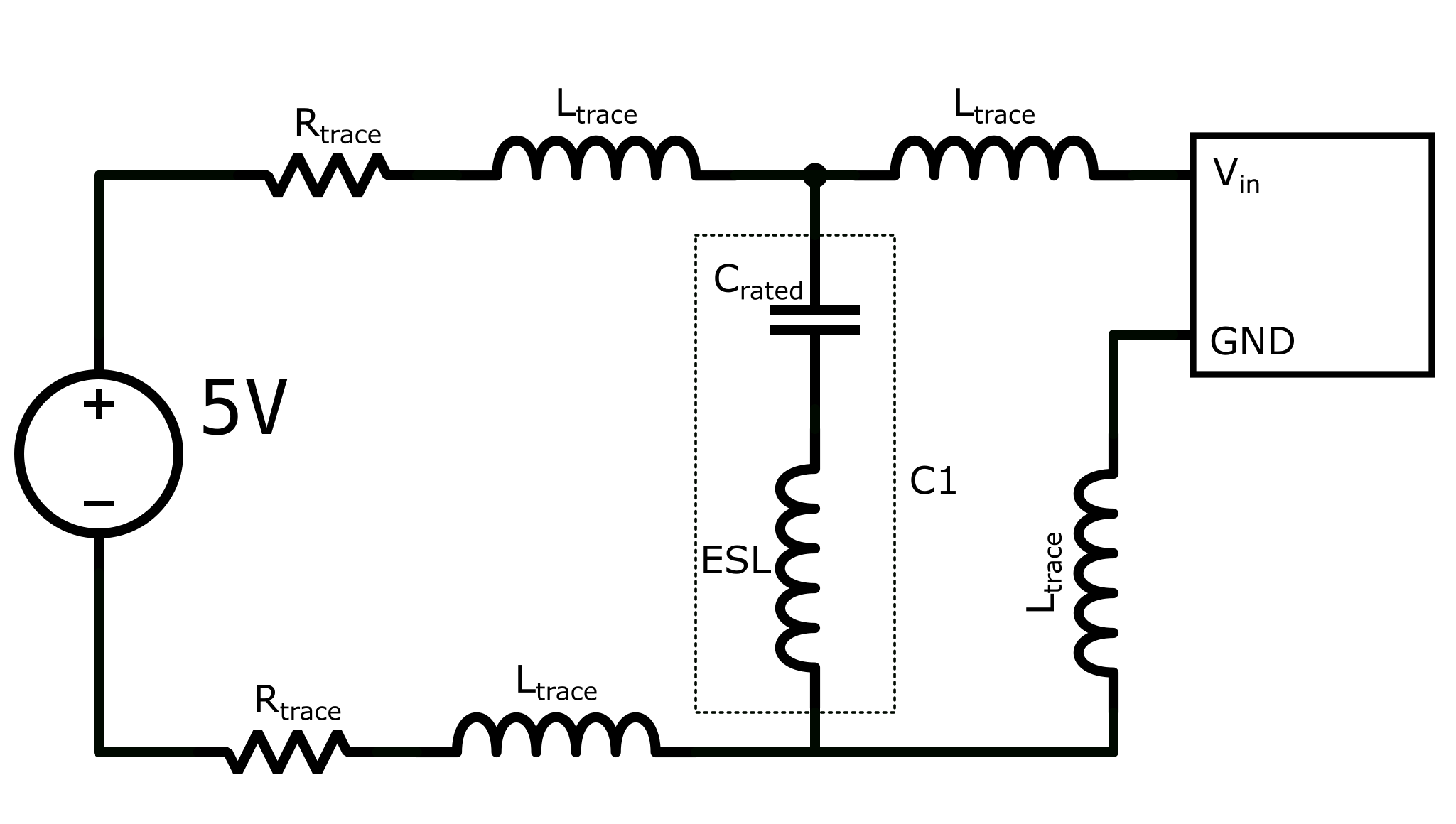 Using a smaller capacitor with the same ESL closer to the part makes (almost - see (1)) no difference - in fact, it's performance might be worse! The reason we often want to use smaller capacitance values closer to the chip has to do with the fact that - in general - the ESL/ESR of these parts is lower (usually, we use smaller packages, as for a given family, these always have lower ESL).

The closer you can get it to the pin, the better, since the trace towards the pin also forms inductance and has a resistance. Note that it is not just the positive trace that matters - it is the inductance of the entire loop that matters - including the ground connection.

This Intersil appnote is a very good starting resource for more in depth information and figures. All figures that follow in this post are from this appnote. 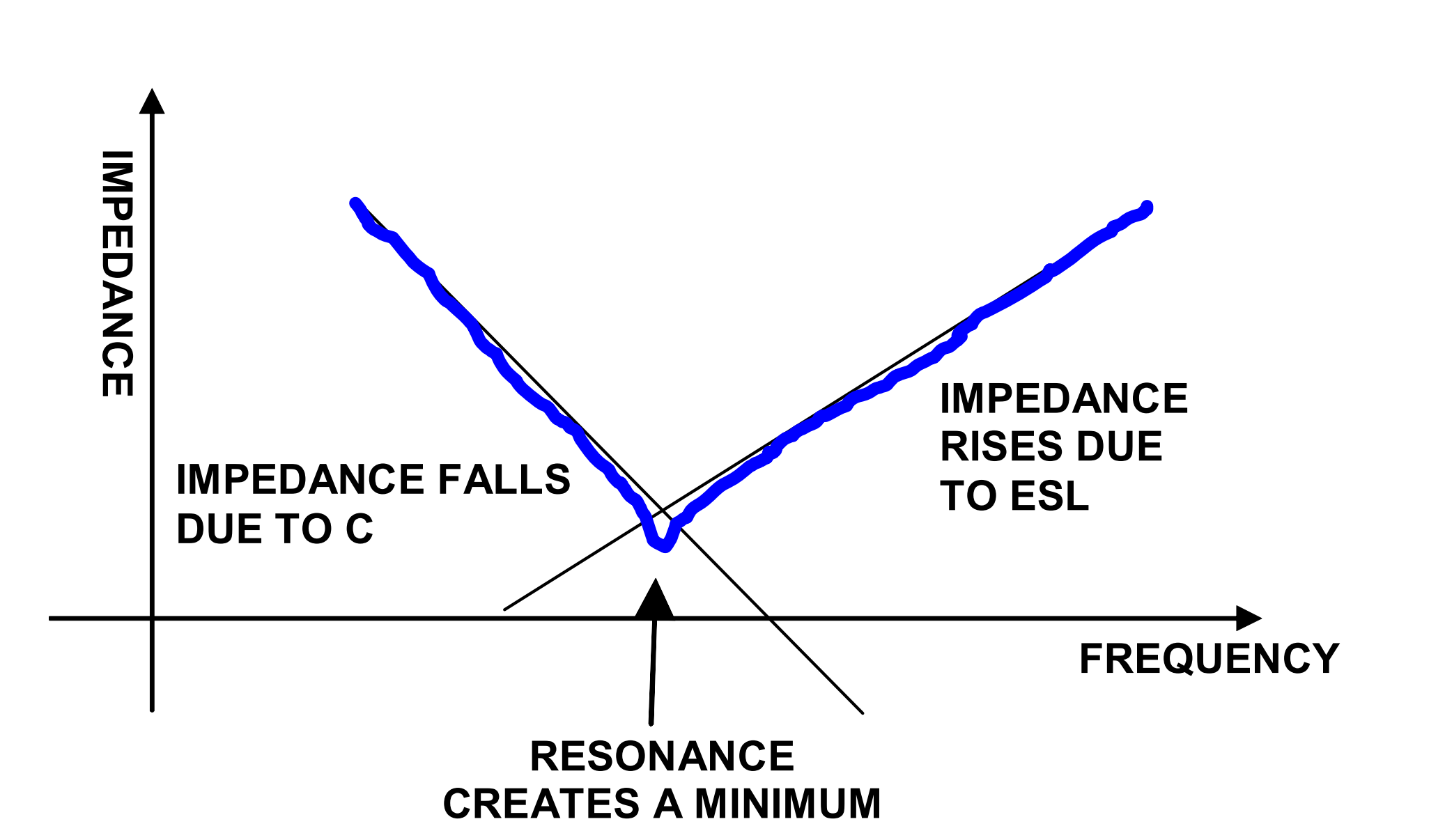 So, what happens if we now get more capacitors? Let's say we choose a 1uF, 0.1uF and 0.01uF capacitor, in an 0805 formfactor. If we now put them together, we get the following plot: 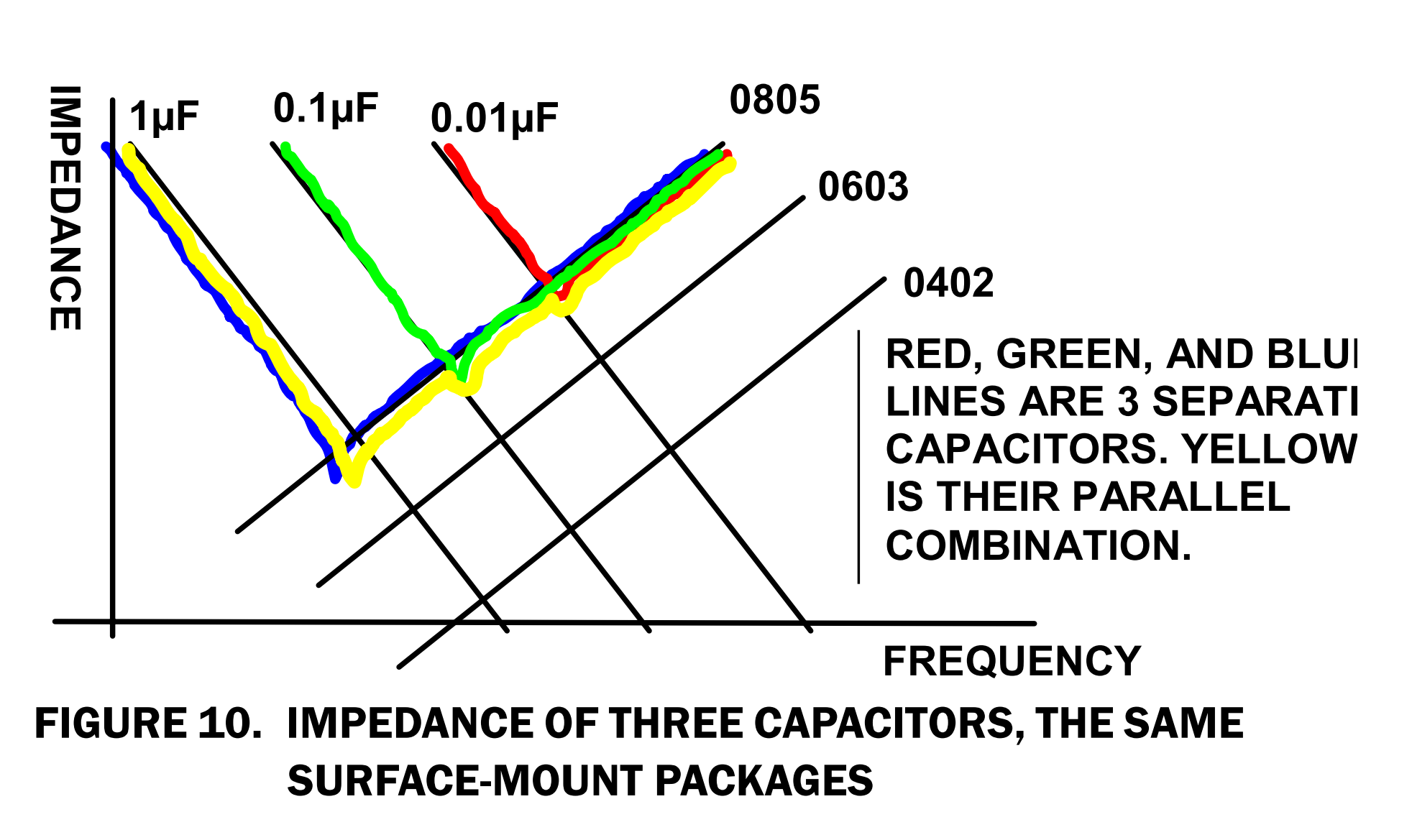 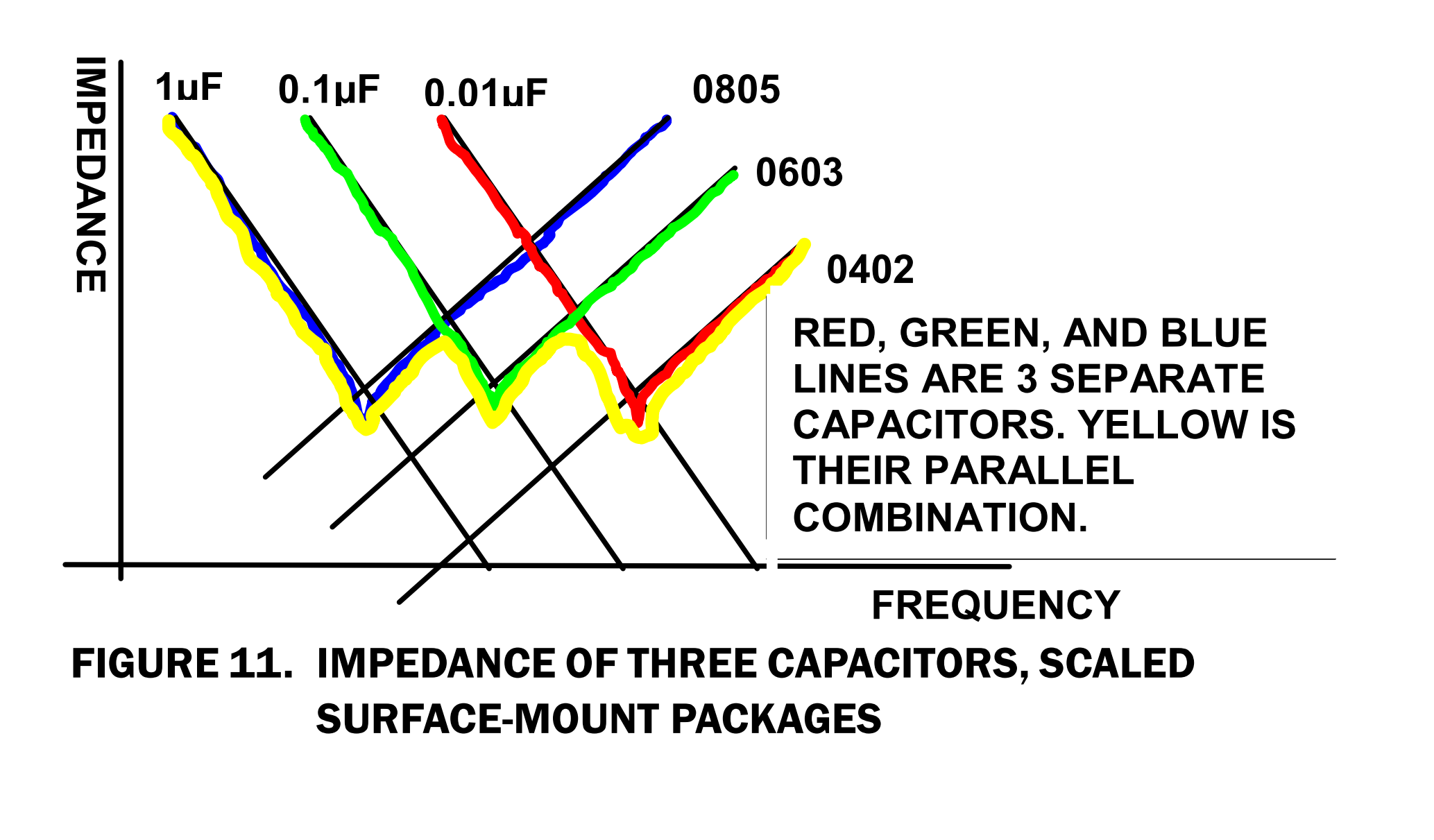 (1)Ofcourse, since it's closer to the part there will be less trace inductance and resistance, but you might as well just put the bigger capacitance part closer, eliminating this difference

How should I put it in the correct order from the nearest to the furthest from the specified pin.

Generally you should put the lowest valued part, which you expect to provide the highest-frequency currents, closest to the chip. This minimizes the parasitic inductance between the chip and the capacitor, giving it the best chance to work at high frequencies.

I suspect that the 10 nF and 100 pF parts are counterproductive here. By pushing the higher valued parts farther away from the chip, they are degrading their performance, but they don't "store" enough charge to provide meaningful current for many loads. In particular I'll suggest very strongly if the chip being bypassed is a digital device, you'd be better off getting rid of the lower valued capacitors and moving the higher valued capacitors closer.

Of course every application is different. In an analog application you might have a very good idea of what frequency band the IC will draw currents in and a low-valued cap might be a better choice.

You should also be aware that capacitors in parallel with values separated by more than about one decade (i.e. the larger part is more than 10x the value of the smaller part) have a good chance of producing an anti-resonant (or parallel resonance) behavior where the impedance is very high at some frequency between the series resonant frequencies of the two parts. This is discussed in detail in section 3.5 of Murata's Application Manual for Power Supply Noise Suppression and Decoupling for Digital ICs

Silicon circuits only work at speed, because of the ONCHIP stored energy. An MCU may have 1nF or 2nF or 100nF onchip, mostly in well_substrate capacitors; wells exist under every Pchannel FET in standard processes; the distributed nature, usually in tiny rectangles, of these wells, along with the even smaller "contacts" into the well and nearby "contacts" into that substrate underlying the well, lead to substantial resistance for charge to flow in and out of the well_sub capacitor.

It gets even better. All those gates and FFs, with lots of tiny FET gate oxide capacitors, also store change in gate-capacitors; any gateC that is not changing state is usefully storing charge, to be used by the sibling transistors just 1micron away, or 10microns away.

And there is some metal-metal capacitance, if VDD is atop GND metal.

Then the MCU clocks, and 100,000 gates simultaneously demand charge, and as the Pch and Nch transistors switch oppositely there is the crossover time when both transistors are ON for say oh hmmm 20picoseconds. Passing 20uA for 20pS. Not all 1,000,000 gates, but just 100,000 gates this time. What does that do to the onchip stored charge.

Not the answer you're looking for? Browse other questions tagged capacitor decoupling or ask your own question.

1
Matching load capacitors to crystal
9
Constant power discharge of a non-ideal capacitor
7
What is the nature and history of UL capacitor recognition?
1
Capacitor placement / count
0
Is there a reason not to put a beefy cap on the output of a homemade power supply?
1
Using capacitor as a rechargeable battery
6
Decoupling Capacitors on each VDD pin on a tiny 36/49 ball WLCSP/µBGA chip really necessary?
0
Bulk capacitor placement/routing
1
Potentially frightening capacitor placement