I'm doing some modifications to a nerf gun, and have already done speed/FPS tests with a chronograph I built, and the next test is modifications that can be done to increase the accuracy. I'm trying to build a target that will sense the x/y position of a dart as it hits a target, or breaks a plane. I have a few ideas, but I'm trying to keep it as simple as possible.

One idea involved a mesh grid of wires, and when the dart strikes the grid, it would cause wires to complete a circuit. Problem there is thats a lot of wires (to get any sort of accurate reading), a lot of points of failure (accidental wires touching), and what sounds like a huge pain in the butt to make.

Another idea was an array of IR leds and sensors. The issue there is then I have to rig up an absurd number of IR receivers, and write an function to determine just which sensors were blocked by a dart. Sounds complicated and like a lot of work.

Are there any sensors out there that react to light (IR, laser, visible, whatever) that are like a strip, and will provide an analog result depending on what section is lit or unlit? Or a sensor that uses a spinning laser that can detect it's position/angle when the laser bounces off something?

Or am I making this a lot harder than it needs to be, and there's an easier solution than what I'm coming up with? I want to fire a dart at, or through, a target, and get an x/y coordinate reading on it. I'd like it to be moderately accurate (1/4" or 1/2" resolution?). Better is great too.

A flexible transparent resistive touch panel could be the answer to your design problem. This kind of panel might be able to cope with the dart impact force, and will give you a reading from which you can calculate the XY position of the contact point. 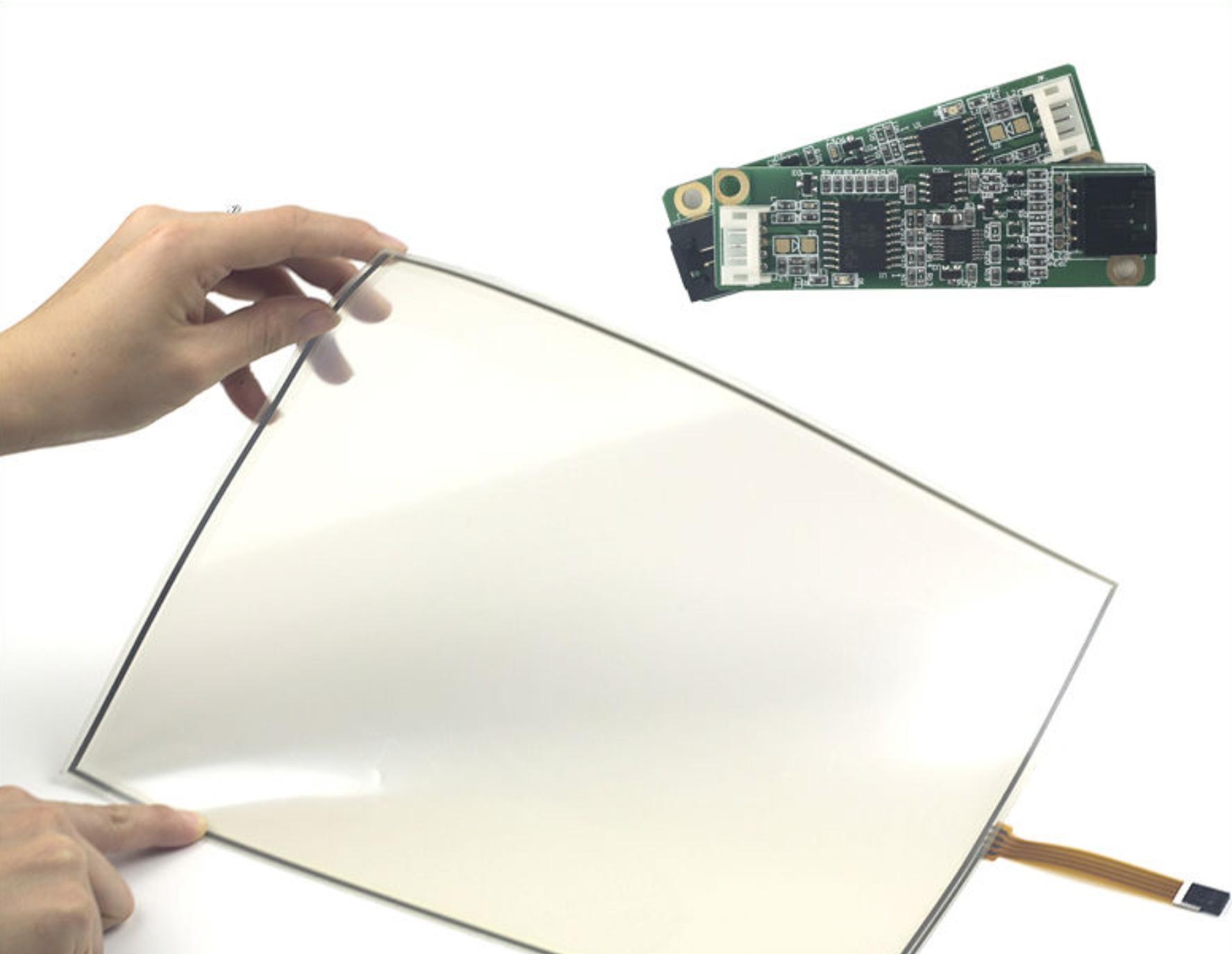 Resistive touch panels are 4-wire analog sensors need to be interfaced through circuitry including ADCs, clocks and special-purpose controllers. However, this circuitry is commercially available as breakout boards, not too expensive, and some of them come with USB interface for extra convenience.

The main challenge could be finding a panel with the size required by your application, but reasonably priced as well. Only you know your budget constraints!

As an example: 17-inch panel with controller.

You could do this fairly easily with a computer and a webcam.

Set up the webcam to be focussed on the target so it fills the image and have software to compare a before and after image to identify the projectiles position.

With a decent camera you ought to be able to able to measure to much greater accuracy than 1.4 inch.

The ultimate would be to configure a system to fire the camera shutter as the projectile crosses a plane just in front of the target itself but before it hits it. That will remove any bounce / deflection effect of the impact.

How about a sheet of something with microphones or accelerometers in several places around the periphery, and measure the relative time of arrival of the collision impulse?

This is not an original idea, I recall reading a writeup somewhere, perhaps on hackaday.

On a cruder end we put an accelerometer on a breadboard, hung it from a DC power cable and used the breadboard itself as a nerf gun target in a hackathon project - but that was only a single sensing point.

You could use a distance sensor attached to a servo that sweeps a plane. Using several of them would increase accuracy by averaging the distances. Use the angle of the servo and the distance reported by the sensor to calculate the position on the plane the dart passes through. This would be a simple Arduino project.

The two issues being the required accuracy and the chance of not "seeing" the dart. Using multiple fast servos with LIDAR sensors would help with both problems. They are not cheap though. Here is a newest LIDAR from sparkfun https://www.sparkfun.com/products/14032 The accuracy is +/- 2.5cm at distances greater than 1m, so you would want to keep it under 1m. I also found a fast servo from hobbyking, rated at 0.08s/60° at no load. You already calculated the speed of the dart at some distance from the gun so, given the length of the dart, will it be breaking the plane for at least 1/10 of a second? If not, just add another sensor sweeping in the opposite direction.

I imagine a simple wood frame maybe 16" square with a servo/distance sensors attached at opposite corners.

Not the answer you're looking for? Browse other questions tagged microcontroller sensor or ask your own question.