I'm building an LED grow light for an, um, indoor vegetable garden, and I'm trying to figure out what dimensions I can get away with for the aluminum sheeting I'm going to use for the mounting plate. I've been trying to use this heat transfer calculator, but unfortunately the physics is a little above my head.

TL;DR - Here's the question - I have an aluminum sheet 12" x 12", 1/16" thick, if I cut it in half, and then use thermal epoxy to bond one half on top of the other, would that sufficiently increase the heat transfer capacity of my heatsink? Sorry if this is a dumb/obvious question, I really should have paid more attention in physics class :)

Cutting the Alu in half and sticking it to the back will do almost nothing to help. What you need to do is increase the surface area of the Alu.

If you're stuck for space, then you have a couple of options. If you have space in the vertical direction, you might try just bending the alu so it's not as wide and fits into the shape of the available space. However, you do still need to make sure the heat can get to the outside world. There needs to be some kind of air flow, preferably over the alu. 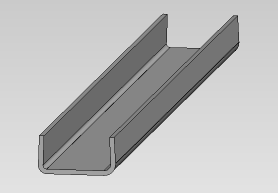 If there is a fairly constant trickle of water to the plants, then you can use this to extract a lot of heat from the LEDs. Instead of using a sheet of Alu, use some box section. Seal up the ends and attach a push-fit pneumatic connector at each end. Pump the water supply through this, and you should be good to go. Even a tiny flow of water should be enough, but it probably needs to flow fairly constantly, not just once a day. 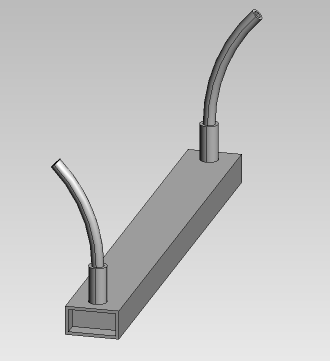 You don't say why you would cut the sheet in half. Anyway, the two half sheets attached to each other will have the same heat capacity as the sheet as a whole. Heat capacity is the product of the sheet's mass and the specific heat capacity of aluminium, which is 0.91 J/(g K). So no matter how you cut and fold your sheet, as long as the weight is the same its heat capacity remains the same.

What you can alter though is the heat transfer capacity. That determines how easy the sheet will exchange heat with the environment. There are three ways of heat transfer:

convection
That's heat exchange through a fluidum flowing over the sheet's surface, typically (forced) air flow. The larger the contact surface the more heat can be exchanged with the air, so cutting in half and gluing the two parts together effectively halves the convection exchange! Keep the surface as large as possible, and as "aerodynamic" as possible; the better the air can flow over the sheet the more heat it will absorb. Mounting the two half panels on top of each other isn't bad, provided that you have air flowing between them. If they're close together you'll need forced air flow (fan), because the air resistance will prevent air passing.

conduction
The most effective for low temperatures. Thermal resistance for conduction is often a few orders of magnitude smaller than for convection. Mount the sheet on a good thermal conductor, like another piece of metal.

radiation
Is more effective at higher temperatures, but you can increase radiation losses by painting the sheet a matte black.

Not the answer you're looking for? Browse other questions tagged led heatsink cooling or ask your own question.

4
How much heat do power LEDs dissipate?
5
Experience with thermal glues/adhesives?
3
LM317 TO-220 heat sinking: Junction to case or junction to pad?
1
Designing a copper plate heat sink
1
Heat transfer tape, or paste, or nothing
2
Designing a DC 12V 80A Power Distribution PCB panel and heat sinking
0
Does heatsink transfer plate thickness matter?
2
Galvanic Corrosion of Copper, Aluminum, and ENIG Plating
0
Getting trouble powering a LED strip with battery