Using a microwave oven transformer as ballast by shorting the secondary

I am self learning electricity and have some basic understanding of RLC circuits.

I came across 2 separate articles (here or here) describing playing around with microwave oven transformers (MOT) which are basically high power step up transformers. What I am interested in is not about getting a high voltage electric arc. Instead, both articles describe some similar techniques in limiting the current to the MOT. Both involve having a second MOT with the secondary shorted together and connect it in series with either the secondary or primary of the first MOT: 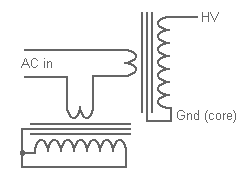 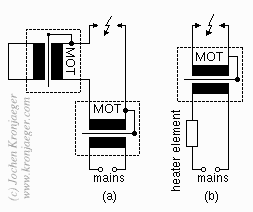 I understand that, in both cases, the second MOT is just an inductive load. But what puzzle me is why short the secondary in both cases? Isn't that by shorting the secondary, we are drawing unlimited current and will blow up the fuse instead of limiting the current?

A microwave oven transformer (MOT) is not (despite the name) an ordinary transformer, it is a specifically designed non-ideal transformer.

Ideal transformers are made as 'perfect' as economically possible, so highest winding inductance, highest permeability core, and lowest leakage inductance possible. Non-ideal transformers have one or more of those things finite, in a designed way, for a purpose.

A MOT is designed to have a relatively large leakage inductance, in order to resonate with and reduce the impedance of the doubler capacitor it drives. This is achieved by using magnetic shunts between primary and secondary windings. You'll see these referred to in the articles you've linked to. Another way to describe finite leakage inductance is that the coupling between the windings is loose rather than tight.

When you short circuit the secondary of a MOT, the primary presents essentially the leakage inductance. This will limit the current drawn to 2 or 3 times the normal operating current, the right ballpark for 'fun with MOTs', and generally low enough to leave fuses/breakers intact. If you leave the secondary open, it presents the primary inductance, too high to be of any use as a ballast. This is what you'd get if you removed the secondary from the MOT.

If you take an ideal transformer and short one winding, then the other winding will also be effectively 'shorted', as the leakage inductance is very low. This will not work well as a ballast.

You could, if you wanted to live more dangerously, use a MOT ballast in the secondary as shown in (a) by using its secondary, with the primary short-circuited. While this is electrically more or less equivalent as far as the arc is concerned, it means the case of that ballast is live, and that any other discharges drawn from the MOT secondary are not ballasted. A primary-side ballast as in (b) is by far the better mode of operation.

An Ideal transformer (Tx) would have no resistance (R), and no inductance (X), and no capacitance (C). But it does. Normally no significant capacitance, but the impedance (Z) can be described as shunt and series components. NOTE: the values are defaults from CircuitLab, not nominal field values.

Now, add in 'Referred Impdeances', where the impedance of the load may be reflected onto the primary by multiplying the impedance by the turns ratio.

Power in a load is retained, but R3', L3' and C3', where the dash denotes reflected, now appear on the primary side of the schematic.

Now lets assume what i've drawn is a MOT, and it's not 240:24 (which made the math easiler), it's now 240:3000ish. Reflecting impedance across the transformer is what we're doing when we short the secondary of the MOT. We are referring across the resistance of a piece of wire to the primary side, so R3 becomes a near-short, making L1, R1, L3, R3 & C3 insignificant. Only the series impedance (R3 // L3) of the transformer now form part of the circuit. Specifically, in a MOT Arcing situation, we are using it as a Ballast Inductance.

As every first timer electronics student will hear, Inductors Oppose Change. then you learn tau = RL blah blah blah. So we use that inductance to provide power from its magnetic circuit to keep up the arc when the ionised air might be trying to dissipate and blow out the arc.

In theory, we would achieve the same benefit if it was in the primary, or secondary, that is for a steady-state analysis we would. Nothing steady-state about Arcs.

In practice, by putting the inductor closer to the arc, that power doesn't have to be delivered through the step-up MOT(s), which would oppose the increased power the inductor-MOT is trying to deliver.

I know this is an old post but I don't believe the OP's question was answered accurately. With respect to all of the posters the current answer has eluded every post (at least I didn't see it, I could have missed it). The mot that has the secondary shorted is not in "parallel" with the circuit, so shorting the secondary will not draw any current. It will however change its coupled primary's inductance by absorbing the magnetic fields generated in the primary and the core. 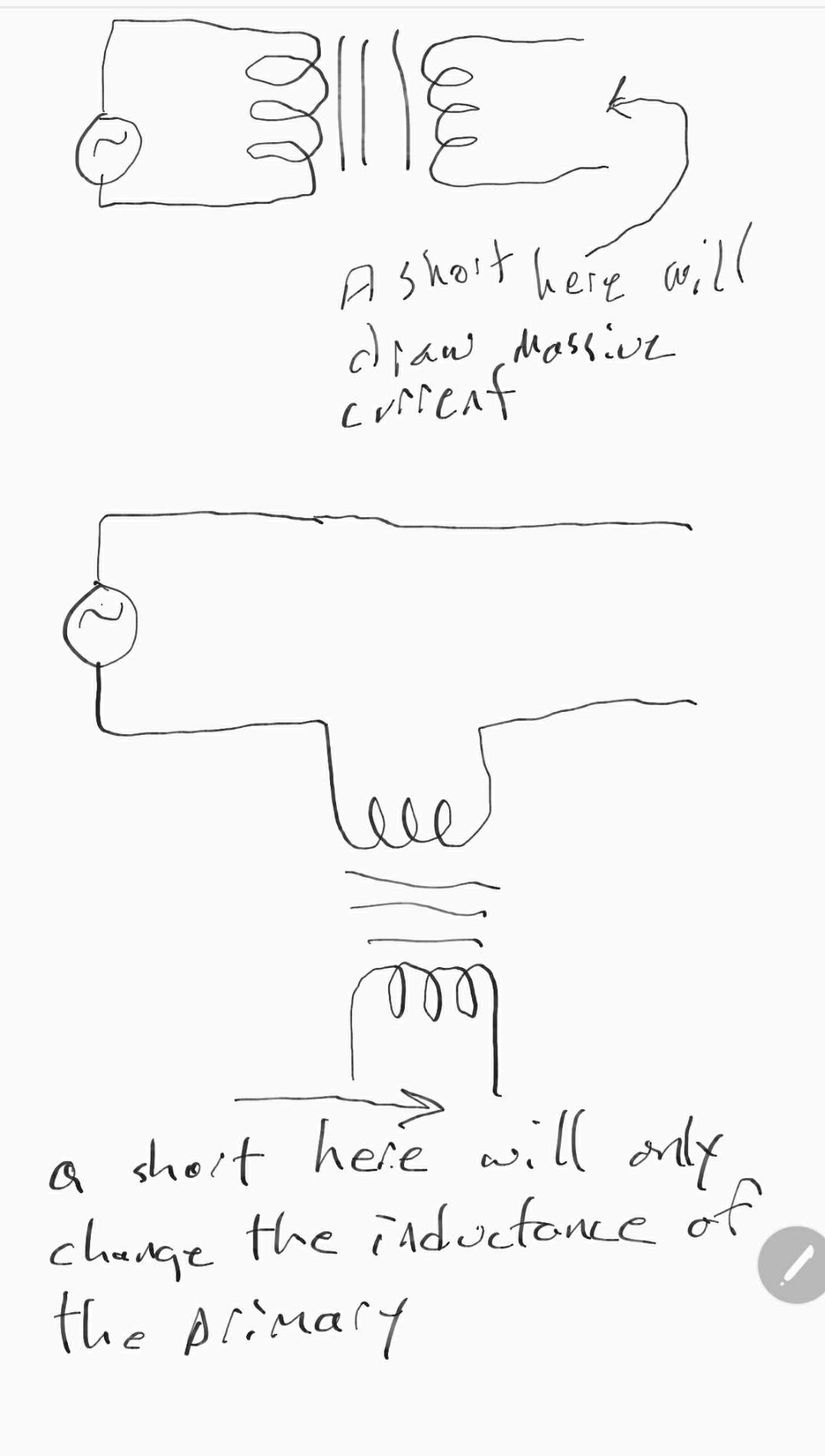 Not the answer you're looking for? Browse other questions tagged transformer ballast or ask your own question.

5
How can I calculate the inductance of the primary of a transformer given a specific load on the secondary?

3
How does a reactive ballast work?
0
SMPS Transformer - Secondary voltage rating
0
Short-circuit primary side of a transformer to collect all the spikes at the secondary
0
Wiring Transformers in Series With a 240V Plug From a Generator?
0
I have a Transformer Core - need help with winding/calculation
1
Series Connected Secondary Transformer
1
What if the primary coil of a transformer was connected without the iron core and the secondary coil?
2
transformer primary/secondary resistance don't behave by rules for me