How can I calculate knee current for this foldback current limiter

So as the title says, I'm trying to calculate the knee current for this schematic. I know Veb(Q2)/R1 is approximately the maximum current through the emitter of Q1 if R4 wasn't there and this was a normal current limiting scheme. I also know R2 is there for limiting the current through the base of Q2. R3 is the current limiting resistor for the base of Q1. but how can I calculate the knee current point? (Rload is just a dummy value) 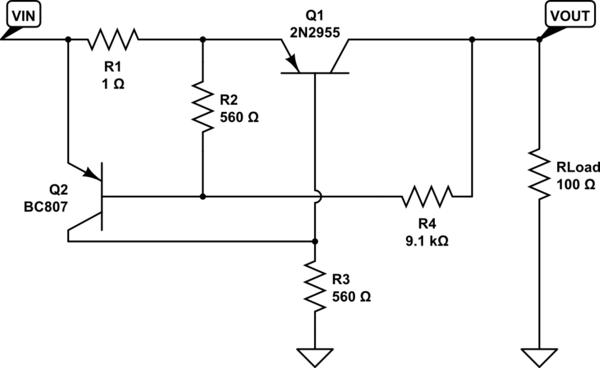 I've drawn two versions of the same schematic below. These diagrams are arranged so that you can focus on their operation during two different phases. Diagram 1 shows the arrangement where the load current hasn't yet risen to the point where \$Q_2\$'s collector current is significant and where the current in \$R_2\$ is pulling up on \$Q_2\$'s base, keeping it out of a foldback behavior. Diagram 2 shows the arrangement where the load current is moving sufficiently towards foldback that \$R_2\$ is now supplementing \$Q_2\$'s base current (along with current through \$R_4\$) and foldback is near. I've used a small green arrow to point out this detail: if you carefully look, you can see that the direction through \$R_2\$ is diametrically opposite in these two cases. 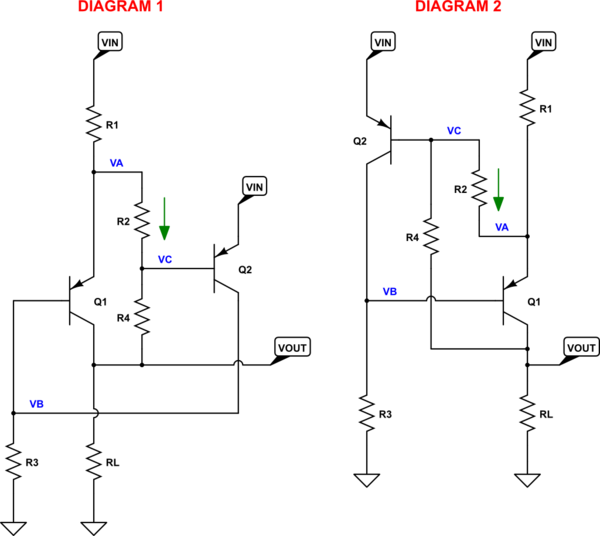 (This isn't quite true, because \$^{Q_1}V_{CE_{SAT}}\$ is also opening up due to the relaxing pressure on its base current and because the load is also pulling down. However, \$Q_1\$ is also still quite saturated and this effect is gradual. While measurable, the added complication is not important for this analysis.)

During this phase (and keeping in mind that some details are held as fixed values although they do vary slightly), \$V_{OUT}\$ will closely follow:

(The last term in the above equation shows the effect of load current on the output voltage [discounting variation in \$^{Q_1}V_{CE_{SAT}}\$.])

And the transition point in the load current, where \$R_2\$'s current goes through zero and reverses direction (and diagram 2 takes over), is:

\$V_T\$ is, of course, the thermal voltage and is, at room temps, \$\approx 26\:\textrm{mV}\$. The remaining BJT values are based upon experience and/or the datasheet and only need to be approximate for this use. The saturation current can vary in parts by a factor of 2 or 3, but can be picked up from a spice model. There are techniques to use with a datasheet to extract that parameter, if the datasheet is sufficiently detailed. But I won't discuss that here. (Typical values are a few tens of femptoamps for small signal devices and an order or two of magnitude more for high current devices.)

A much simpler approach to dealing with this earlier phase is to simply guess (accurately enough) that \$Q_2\$ will be "turning on" about when its \$V_{BE}\approx 600\:\textrm{mV}\$ and will be off before that point. (Clearly, the point at which \$R_2\$'s current goes to zero will be the point where the voltage across \$R_1\$ is the same as the voltage across \$Q_2\$'s \$V_{BE}\$.) This idea leads to a much simpler equation:

\$R_1\$ usually dominates \$R_1\vert\vert R_3\$, so that explains the simplified denominator. The last term in the numerator is typically on the order of only a few tens of millivolts, by itself. And the first term in the numerator only changes by \$60\:\textrm{mV}\$ for each factor of 10 change inside the logarithm. So practical BJT parameters pretty much lead to the conclusion that the numerator will be at, or slightly more than, about \$600\:\textrm{mV}\$ after all is said and done.

This positive feedback rapidly acts to force the output voltage low enough so that the remaining collector current in \$Q_1\$ can be supported by the nearly vanished base current still remaining to \$Q_1\$, as \$Q_2\$'s collector continues to pull up harder on \$R_3\$ and pinches \$Q_1\$'s \$V_{BE}\$ still tighter.

This is the fold-back behavior.

We can predict the point at which this will take place:

The above calculation does demonstrate, though, that some of the terms aren't as important as others. The above can be reduced in complexity (when the source voltage is very much larger than the saturation and diode drop voltages) to something like this:

It helps to recognize a simple BJT behavior: as recombination current is removed from \$Q_1\$'s base and it moves out of saturation and into its active region, its \$V_{CE}\$ widens rapidly in response. It has no other possible response. Prior to that point, \$V_{CE}\$ remains relatively slow moving (almost static) because the BJT is saturated. These earlier small changes do feedback through \$R_4\$. But if you look at diagram #1, and focus a bit on the fact that \$R_2\$ is supplying a significant part of the current into \$R_4\$, you may realize that minor changes at this time in \$V_{CE}\$ don't impact \$Q_2\$'s base current so much as they affect \$R_2\$'s current. The voltage at \$V_C\$ just hasn't gotten to the point where \$Q_2\$ "cares," yet.

But after the change in direction in the current in \$R_2\$?? Then yes, changes in \$V_{CE}\$ provide feedback that now directly and entirely affects \$Q_2\$'s base current. And it is here that we start to become more interested in changes in \$Q_1\$'s \$V_{CE}\$ and it is now that we need to focus much more closely on precisely when the foldback might happen.

But even after the change-over, when the current direction in \$R_2\$ has reversed, \$Q_1\$ is still heavily saturated (in a properly designed circuit.) \$Q_2\$'s collector hasn't yet replaced enough of it to push \$Q_1\$ out of saturation.

So what are really looking for is the exact moment when \$Q_1\$ comes out of saturation, because this is the point when its \$V_{CE}\$ will open up much more quickly (very fast) if any reduction in its base current happens. (Or, equivalently, its \$V_{BE}\$ is pinched any more.)

One could choose to write this using the Shockley equation. We want to know when the required base-emitter voltage exceeds the available voltage, or:

If \$V_B\$ weren't itself a complex function of the behavior of the surrounding BJTs, that would be reasonably solvable using the LambertW function. Unfortunately, it is rather more complicated that that, now.

(If you are interested in what the LambertW function is [how it is defined] and in seeing a fully worked example on how to apply it to solving problems like these, then see: Differential and Multistage Amplifiers(BJT).)

But the added complexity really isn't needed. It is over-kill, partly because parameters aren't all that well known or consistent between devices. It is "good enough" to just use an approximation for \$Q_1\$'s \$\beta\$ and \$V_{CE}\$ and go with that rather than turn the whole thing into a mindless rat's nest for Spice.

(Simplify as much, but no more than, as necessary.)

A way out is that we know \$Q_1\$'s base current must be just at the point where it is entering its active region and its \$V_{CE}\$ is widening at an increasing rate. This will be right at the point where at its operating point \$I_C=\beta\cdot I_B\$, of course.

(Note: But BJTs vary a bit and we should probably account for that variation and look at best and worst cases here. [I invite you to try the earlier equations with smaller and larger \$\beta\$ values and see how the results vary.])

So we want to convert the above equation from looking at voltages to looking at currents, instead. Changing it so that are instead asking, "When is the moment when this required base current now exceeds the available base current?" Since \$Q_2\$'s collector is driving that process, we need a way to compute that side of the equation. It's not too hard to do, luckily. So here is what I came up with:

The first term on the left side represents the total current through \$R_3\$, with the numerator being the assumed \$V_B\$ right at the point where \$^{Q_1}\!V_{BE}\$ is the value just at the point where \$Q_1\$ enters its active region. This will, of course, include the drop across \$R_1\$ (approximated by assuming that at this time \$I_L\$ is the only remaining important current causing that drop) and also the \$V_{BE}\$ drop for \$Q_1\$.

The second term on the left side represents the collector current for \$Q_2\$ that is in the process of supplanting \$Q_1\$'s base current. This is just the base current times \$Q_2\$'s \$\beta\$ value and includes the two currents: one from \$R_2\$ and one from \$R_4\$. That last term subtracts away from the total current in order to answer the question about what current remains for \$Q_1\$'s base.

It's just algebra after that.

I think it will be very hard to find such a general equation for this circuit. Because the current through R2 will depend on Q1 Vce voltage and the transistors current gain. So try to use some simulation software.

As VIN-VOUT increases, more current flows through R2 and R4. This generates a voltage over R2 that offsets the voltage limit threshold.

Assuming very high beta for the BJT, then we can assume that the Vbe of the Q2 is ~0.7V when current limit is active. This allows us to write the equation:

If your supply is 27V as stated in the comments, then the current limit may prevent you from starting up from VOUT = 0V! 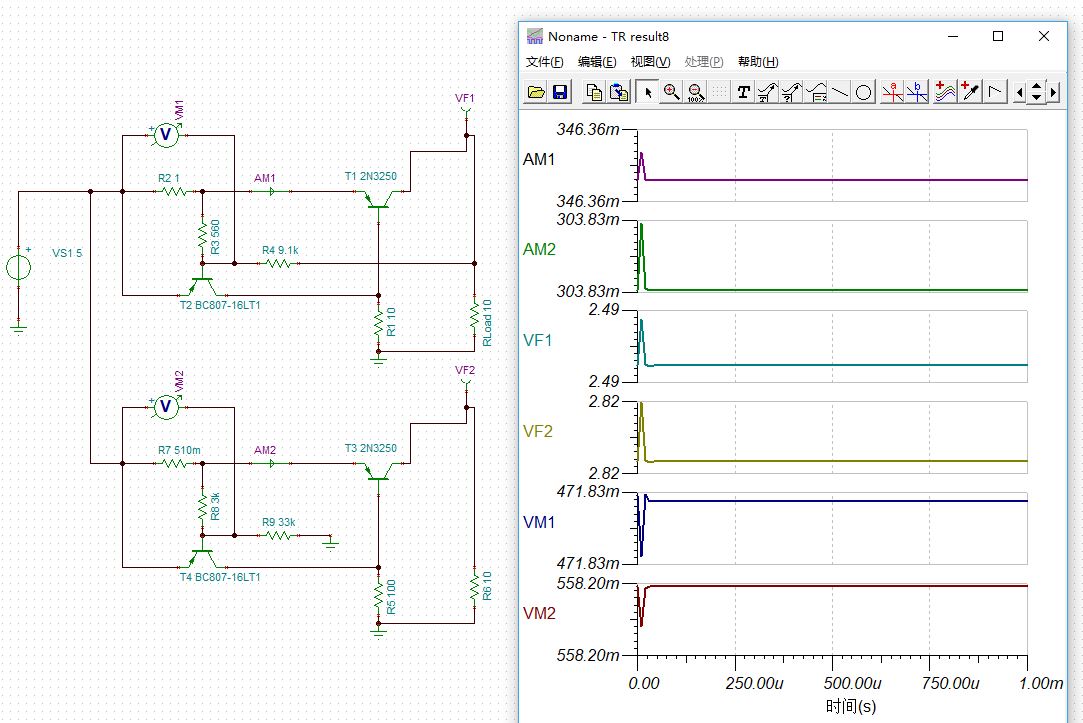 Not the answer you're looking for? Browse other questions tagged current bjt current-limiting or ask your own question.

5
Differential and Multistage Amplifiers(BJT)
2
Fuse Circuit Using Transistor (Working)
3
How is the quiescent current and emmiter resistor determined on the driver and pre-drivers of a class-AB audio amplifier output stage
1
How to calculate this current limit circuit?