Considering the following setup, 4 equal inductors (4.5V DC, 90 mA pager motors of unknown inductance values) in both parallel and series connection, how many flyback diodes should be used? Is one enough for the entire setup? Or one per series pair or one per parallel pair? Or should each get their own flyback diode?

Or is it completely dependent on the voltage and current through the inductors? 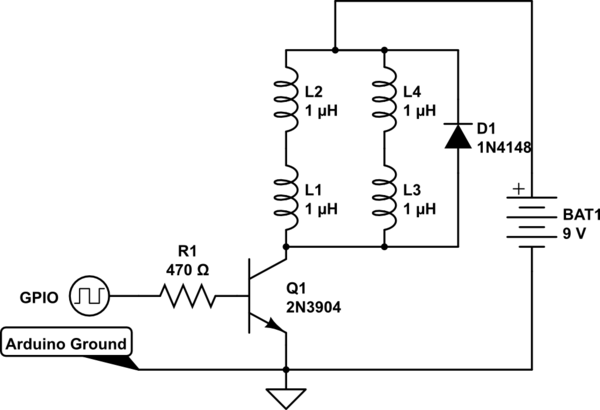 One is enough. It will see a peak current equal to the current through the two parallel paths. So if each is 90mA it will see 180mA peak which is okay for a 1N4148.

Nothing to do with the diodes, but if you stall one of the motors, then its series partner sees almost double the voltage.

One diode will be enough for flyback protection provided it is rated for the full current.

Also, since those are actually little DC motors, not just coils, you should add capacitors across each coil to squash the commutation noise. See this cross thread.

The issue being the diode only protects the transistor by removing voltage spikes from the top of it. There will however also be large spikes between the series motors as commutation happens. That will be picked up elsewhere in your circuits and probably on your AM radio.

Hooking them up like that you may also find things do not quite work as you expect. One parallel path may hog all the current.

Wiring motors in series is also a bad idea if the are not mechanically coupled. Whichever motor has the least friction will run faster than the other. Wired that way you have built a "differential drive". You will find it quite easy to stall one and have the other go twice as fast, if it does not do that on it's own.

Not the answer you're looking for? Browse other questions tagged inductor flyback or ask your own question.

8
Electrical behavior of holding magnets when you pull them apart
2
How to correctly use a LC meter/bridge
0
Beginner: Inductors in Series and Parallel HELP
0
Can I place my inductors in parallel to make a Flyback?
2
Should a freewheeling (flyback) diode be used on the coil of a 2-coil latching relay?
2
Control latching pulse-solenoid-valve with MOSFET Array
1
Selecting a switching transistor for a 5V relay
6
Do ferrite beads need snubbing diodes?
0
Schottky diode as a flyback diode with PWM?