Recently I have brought a Google Chromecast Audio and the audio signal is fed directly to my stereo. I want to detect on the sound level in order to turn the stereo on and off. Then I successfully managed to decode the data signal on the interface which connects B&O audio devices such as CD and Tape-players to their amplifiers.

Below I have used a naive approach to connect an analog input of an Arduino to detect the sound.

Generally the project is working fine. But the problem is that the sound, especially the bass gets distorted/degraded when the Arduino is connected. How can this be avoided?

I have very limited experience in analog electronics and have no oscilloscope or any other equipment. My guess is that some/large amount of current must flow through the Arduino. Secondly, the Chromecast might deliver levels of voltage higher than 5v.

The audio signal coming from the chromecast device is AC; that is, the voltage varies between positive and negative voltages. Any negative signal will likely exceed the specs of the arduino input. Directly connecting an audio signal to the arduino pins is a bad idea, and might result in a broken arduino depending on the signal amplitude and source impedance.

The distortion you hear is caused by the input protection diodes built in to IO pins of the microcontroller:

The arduino doesn't really need to receive the complete audio signal (black) to do the job you want it to. Knowing how high the peak amplitude (red) is would suffice. This is easily done with a simple circuit known as a envelope detector or peak detector. 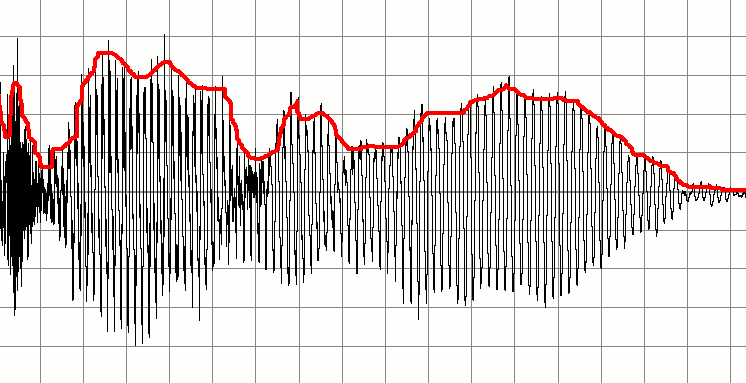 What you need to do is to add a capacitor to AC couple the audio, add a peak detector to easily detect the presence of an audio signal, and add a voltage divider to guarantee a safe input level to the arduino.

Be aware that this circuit won't work for audio signals below roughly 1.4 V peak to peak. If your signal is weaker than that, you can either:

This circuit attenuates the amplitude to one third and biases the signal to 2.5 V, so that signals below 15 V pk-pk are always within the input range of the ADC.

Not the answer you're looking for?Browse other questions tagged arduino amplifier audio analog voltage-detector or ask your own question.

7
How to make a peak detector circuit

6
Long three cables connection: can I use an audio stereo cable?
6
Patching stereo audio into an old car's tape deck
2
How can I find and remove servo/motor noise from this audio amplifier?
1
Handling audio signals on a 5v ADC
1
How to detect a number of frequencies with minimal circuitry?
0
Problem at audio output pin with electret microphone
1
Should a PAM8403 be directly fed from a CHIP GPIO audio signal?
0
How to interface a passive inductance sensor output (audio-level signal) with Arduino?
1
How to split audio signal into 3 separate channels?