I've been trying to build a high capacity UPS with a deep cycle marine battery, 300 W inverter and a Double Pole Double Throw relay. The relay switches the power source from mains to the inverter during a power failure.

The system worked fine for a couple weeks--and then the inverter stopped working. So I tried out a replacement one, but when the UPS was unplugged from mains there was a large spark accompanied by a puff of magic smoke--and that inverter is now toast as well.

I tested out the DPDT relay, and its working normally, as is every other part of the circuit except the inverter. I was thinking that there might be an issue with the mains and inverter ground being connected, or that somehow 120V from the mains is being connected to the inverter output. I can't understand why this would happen though, especially since it was working fine for weeks already.

The other possibility is that the inverters were overloaded. The load is a fish tank pump with a 1200 GPH rating and supposed 150 W max draw. In the weeks that the UPS was working, this was not the test load. I was using a similar load of likely more than 150 W, running two server computer for about 5 hours at a time. Also, both inverters are supposed to have over-current draw protection, so this shouldn't be a problem anyways--wouldn't the inverter just shut off?

Any help or suggestions would be greatly appreciated. Please note that I am pretty new to all this :)

A rough schematic is below. The DPDT relay is drawn in the state it would be when the coil is unpowered. 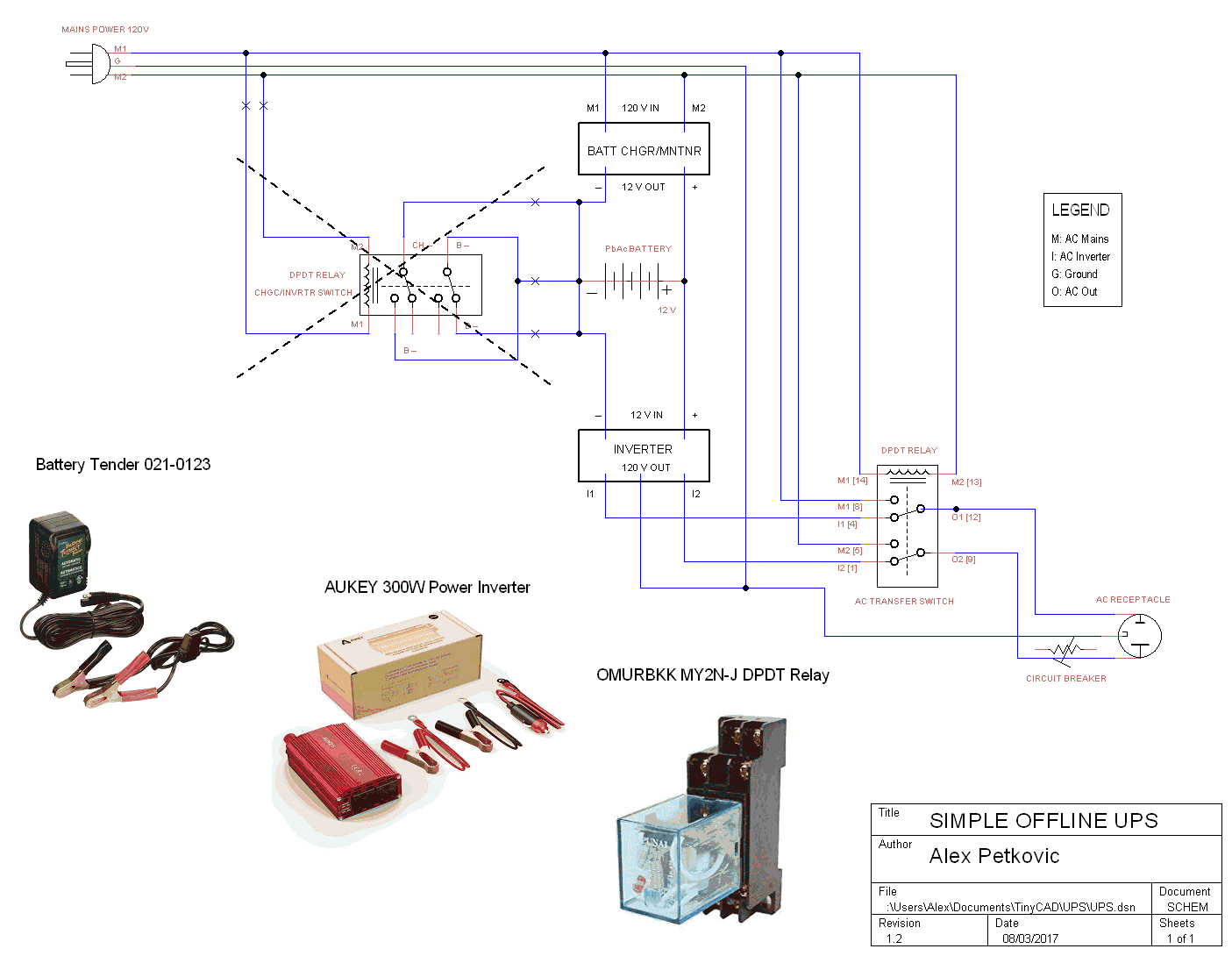 I'm guessing that during a transition of your DPDT relay, an arc (that you stated seeing) may have bridged between the two "live" contacts (1 from AC Mains, one from Inverter), causing a momentary short between the AC Mains line, and the Inverter output. If this happened while the Mains and Inverter frequencies were offset by 90-270 degrees, there's a very real possibility that the mains caused a high enough surge to "smoke" your inverter.

Most likely, the inductive "flyback" from your water pump's motor caused the initial arc, and the fact that the arc was connected to both the mains pin and the moving relay "load" contact, caused a "dead-short" between the two supplies when the "load" contact reached the end of its travel, and contacted the "Inverter" terminal inside the relay.

If you're willing to "melt some solder," I've designed the circuit below as a "failover power switch" to automatically switch from mains to inverter power during a mains outage, then switch back to mains power as soon as it is restored. 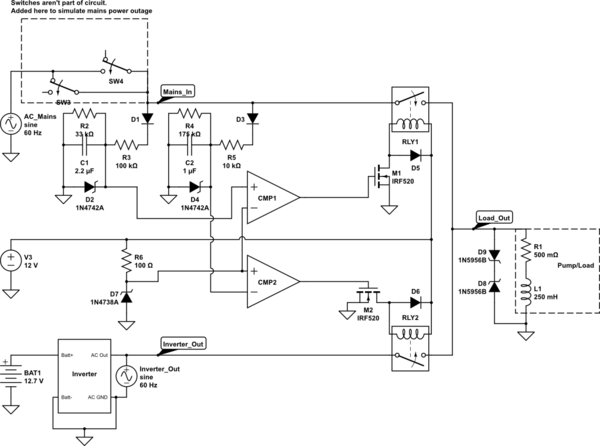 The Drawback: Depending on your load's sensitivity to outages (pump won't much care, but sensitive electronics might), the "delay time" in this circuit might be long enough for a connected device to sense the power outage & shut-down. If this happens, you may need to tweak the capacitor &/or resistor values in the timing circuits to reduce the delay only enough that your device stays powered up. Just remember; any overlap and poof...more inverter smoke.

While inductive load are switched on or off, the voltage spike that occur is much higher than the mains voltage. Since the gap between the movable and static contacts of the relay is very less, this high voltage can jump this gap. Once the arc is established, even the mains voltage will be able to sustain it. This is likely to occur when the switching happens at the moment when the voltage is at its peak.

Not the answer you're looking for? Browse other questions tagged relay mains inverter ups dpdt or ask your own question.

4
Plugging a UPS into an inverter
1
Grid changeover switching
1
Is the output from a 120V 300W UPS enough to kill a person?
3
Why should a UPS fail if the battery fails but the power from the wall outlet is still good?
1
DIY Computer UPS - Smoothing DPDT Relay 80ms Cutover
2
Can anyone help me with this delay problem in my UPS circuit?