What detection method does phased array radar use?

I have been learning about radar technologies for a while, with the intent of building one for fun. When looking at Phased Array radars, there is plenty of information on the beamforming math and cool animations showing the wavefront. But there seems to be little information on what goes on in the other parts of the system (see below). For instance how is the data interpreted? How is the signal received? 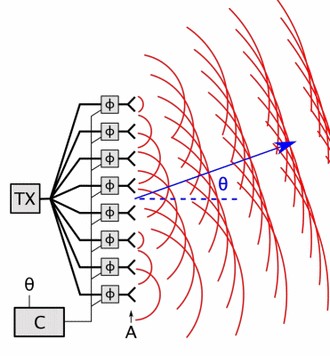 I was thinking that you can just hold the phase shifters constant and have the return signal just travel back through the rf chain to a circulator to split off the rx. (Are phase shifters in the real world bi-directional?)

I was looking at some kind of Frequency-Modulated Continuous-Wave setup because it cam be realized pretty cheaply with fairly low bandwidth ADC requirements but I am unsure if this can be applied to Phased Array Radar, or if there are even better techniques out there.

As a question, it's bordering on the 'too broad' mark. However ...

An antenna array with phase-shift available at each element is 'only' a way of electrically steering the antenna. What signal you send, what you do with the returns, whether you chirp it, or extract Doppler, or what, is entirely down to the transmitter and receiver processing.

A real physical phase shifter, say diode-switched lengths of line, is bidirectional. The bidirectionality is only useful in a monostatic system if used between the final power amp and the antenna array, which would mean at high transmit power. This is not really practical for a high power system, most would take advantage of the ability to use multiple low power transmit amplifiers, one per element, and phase shift earlier at low power in the signal distribution.

However, any system fielded recently (last few decades) will not be using real RF phase shifters. The phasing is done in the signal processing domain, for both transmission and reception. For transmission, multiple channels are synthesised at baseband or a low IF with DSP and DACs, and then upconverted by a common LO, allowing fine control of phase and gain for each path.

After all receivers have been mixed down by a common receive LO, and digitised to baseband, phase shifts are applied numerically. This allows for the formation of multiple beams after the fact, or of direction finding routines like MUSIC or ESPRIT.

You can synthesize beams using I+Q multiplying DACS, at low frequencies, then upconvert to RF using many mixers (one per radiator).

Similarly for receivers: downconvert the many incoming antenna signals, then digitize at IF, using synchronized Sample/holds.

Not the answer you're looking for? Browse other questions tagged rf signal-processing radar or ask your own question.