What does the value of reactive power represent physically?

$$\begin{align*} P=VI\cos\psi \\ Q=VI\sin\psi \end{align*}$$ where P and Q are active and reactive power respectively. I understand the formula for P, and its derivation is presented in my notes. Physically, P represents the amount of energy dissipated through the resistor. What does Q represent?

Considering the graphs of power vs time in capacitor/inductor only circuits, the average power is 0. Shouldn't this mean that on average reactive power is just 0?

Apologies if the question is a bit unclear, I am having a difficult time just explaining my confusion.

Let's ignore the power aspect for a second, and think about what reactance really is.

You know a math and theory, you can talk about things in abstract theoretical constructs using complex numbers, phasors, and all that. But abstract models are exactly that: abstract models. The math can model a thing, but it won't really help you understand the physical system it is modeling except in other abstract ways.

So let's ignore the math for a second, and talk about what reactance really is.

Actually, let's talk about resistance. The real component to impedance. Ultimately, resistance represents energy loss. Resistance consumes some of the kinetic energy of electrons moving through the circuit, and that manifests as the familiar ohmic voltage drop we see across any resistive load. Electrons smack into stuff, set them vibrating, and the resistive load heats up as joules are lost by the electrons and transferred into the load. The faster the rate of energy that moves through this load, the faster the rate of power lost, and the harder you have to push to make that happen.

Energy being stored looks just like energy being dissipated, at least at first. In both cases, energy that was in the circuit is no longer present. The only difference between resistance and reactance here is that with resistance, that energy is gone for good, but reactance will eventually return that energy back to the circuit at a later time. Well, and of course as a measure of storage, they eventually reach a maximum amount of storage given a static circuit. A capacitor will need a higher voltage to store more energy, an inductor likewise will need higher current to store more energy. This is the 'reactance' aspect. As energy is stored, less power is seemingly dissipated by this reactance until it vanishes entirely. If the power starts going down, the stored energy is released back into the circuit.

So what is apparent power? It's simply the rate at which a circuit or part of a circuit (depending on what you're calculating for/looking at) is storing energy, or, if the magnitude is opposite, the rate at which it is releasing energy. That's all. It's not weird, or strange, and it is a real, physical, quantifiable thing. If you charge a massive capacitor bank, from a battery, it will consume joules from that battery, and it will do so at a certain rate, one that is highest at first, but will eventually fall to zero. This is, technically, reactive power. But it's still measured in watts, and watts are, well, always watts. You just are measuring the rate at which something stored joules, rather than the rate at which it simply dissipated them.

Your confusion I think is that you've actually sort of arrived at the answer already without realizing it. If you have a circuit with only capacitors and inductors, then there is no 'P' as there is no energy being dissipated at some number of joules per second. There is only energy being stored, and it will eventually get released, and so yes, it averages to 0. Reactive power always does. It's ultimately just storage, not consumption, so yes, the it will always always always average to 0. Those joules got loaned out, but inductors and capacitors have terrific credit ratings and always pay you back eventually, so you didn't actually lose any money/joules in the long run.

So, you don't need to talk about this in terms of math at all. In fact, if you understand that reactive power is simply the rate energy is being stored and then released, measured in joules per second or watts like anything else involving power, then the behavior and math should all just make logical sense, because that's ultimately what you are modeling with said math.

Now, one might wonder why reactive power even matters if it averages to zero.

Let's talk power factor real quick. Power factor is, of course, the ratio of real to apparent power. This might seem like a rather strange or pointless thing to have a ratio of. I mean, who cares? The apparent power isn't actually being lost, why even measure it?

The issue is that this energy storage is never (excepting in the case of perhaps superconductors) totally efficient. Electrons have to move onto the negative plate of a capacitor, while an equal number of electrons are pushed off the positive plate. Moving charge is current. Conductors (again, except in the case of superconduction) always have some resistance, so you have losses. In the context of alternating current, where storing energy will have a profound effect in this regard, you wind up having electrons flowing in and out over and over, uselessly storing energy for no reason. So even though the energy is getting returned to the circuit, you're still suffering losses in the form of current flowing but without it doing any work. Really, the idea of current and voltage phase is just a way of looking at how reactance is effectively dropping voltage but because it is storing energy, or maintaining voltage (or increasing it to maintain current instead), by releasing energy.

Never forget that important concept, that all of this is ultimately just different sort of abstract ways of looking at or modeling one true, physical process going on, which is actually very simple at its core. The storage of energy, and that there are two different fields with which it can be stored. From that concept, everything else can be derived.

When you have a complex load, its associated power can be modeled with a complex number:

As op noted, the only "useful" power is the real power P, since it is the only power dissipated in the load that can do useful work.

But what about delivering the power to the load?

Suppose you have a purely capacitive load, and a sinusoidal power source, and you need to size the conductors from the source to the capacitor. You calculate the real power, and it is zero! You use very thin wires to connec the cap and... BANG they vaporize. What happened?

The reactive power Q, even if it is not dissipated, must be carried to and from the load and must be taken in account when sizing all the components making a power transmission line. Since usually \$P\neq0\$, to size a power line power engineers use apparent power, i.e. the magnitude of S, or \$\sqrt{P^2+Q^2}\$.

To answer your question, Q physically represents the power that is continuously "bounced" between the source and the load, and it is fundamental to size conductors, transformers, switches and everything that constitutes a power line.

"Reactive power" is one of several possible ways of reconciling the fact that in AC systems, the voltage times the current isn't the average power.

This can be accounted for by tracking the phase angle, looking at V or I as a phaser, or treating the 0° and 90° parts separately.

You are right in that reactive power doesn't actually deliver any power. The confusion is that the word "power" is applied. Calling it the "reactive VA" might be more accurate, but right or wrong, the industry has converged on the term "reactive power".

This bookkeeping scheme has some useful properties. By thinking of and accounting for the real and reactive power separately, they can more easily be dealt with separately. For example, capacitors are reactive power generators. This may sound odd at first glance, but once you buy into the definition of reactive power, that's what capacitors are. Note that inductors are therefore reactive power consumers. The electric grid usually looks a little inductive, so "reactive power" has been defined to be positive to feed this inductance.

Capacitors really do offset the phase shift caused by inductors regardless of what bookkeeping convention is used. When dealing with the electric grid, the "reactive power" bookkeeping method has proven to be useful in quickly evaluating what is going on and what is required to offset reactive loads.

For example, you could describe a situation as 101.5 MVA with 10° lagging phase, or you could describe it as 100 MW real power and 17.4 MW reactive power. The two are equal mathematically. However, the latter is usually a more immediately useful expression when dealing with this situation in the power utility world.

Reactive power \$Q\$ is a measure of the energy \$E\$ that is oscillating between the generator and the load without loss. At any instant energy might be moving from load to generator or the other way, and the energy stored in the load will vary over time. But the sum of the energy in both is constant, since by definition there's no loss.

If you follow the convention of using a negative reactance for capacitors, you might end up with a "negative power". But this is just a mathematical convention to distinguish between a 90° or a -90° phase shift; either way the total energy oscillating between the load and generator is the same.

Let's say the load is just an ideal inductor.

And reactive power \$Q\$ is just the product of voltage and current since our load is purely reactive:

Reactance is related to frequency \$f\$ and inductance \$L\$:

Energy \$E\$ stored in an inductor is a function of the inductance and current \$I\$:

When current is at a peak, so too is the stored energy in the load inductor. We can convert RMS current to a peak instantaneous current like so:

Let's combine these equations, starting with (5):

The simplest way to think about reactive power is to realize that some kinds of a load will spend a portion of each cycle taking energy from the line in excess of what they'll use, and then spend another portion of each cycle giving the excess energy back. If a load consists of a passive network of resistors, inductors, and capacitors, then any time the reactive component of instantaneous power is positive, the device will be absorbing energy that it is ultimately going to return, and whenever the reactive component is negative it will be returning power that it had previously stored up.

Physically represent while still taking about electricity is a tough one. If you can accept an analogy, this is my favorite explination of reactive power it you look at it from the utility companies perspective: 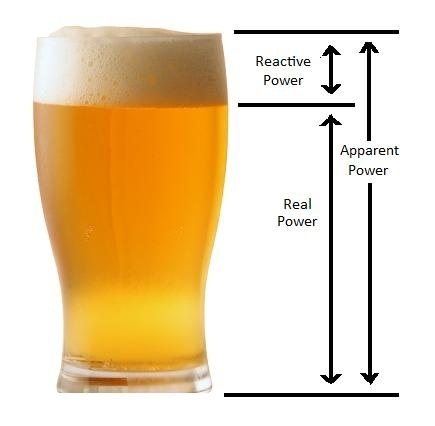 Not the answer you're looking for? Browse other questions tagged power passive-networks or ask your own question.

0
What is a Kva in simple terms, for somebody who doesn't know electrical engineering?

4
Measuring real and apparent power
1
Reactive Power in the circuit
0
Reactive power in a system
1
Does Reactive Power flow between Energy storage elements in a three phase system?
0
Calculating the reactive and active power
2
Why is power factor such a meaningful quantity?
0
Reactive vs Real Power in DC-DC Converters
4
Capacitors in parallel going negative