A question about loop gain, feedback and stability of an op amp circuit

I read this article on the feedback and stability concept of an op amp. 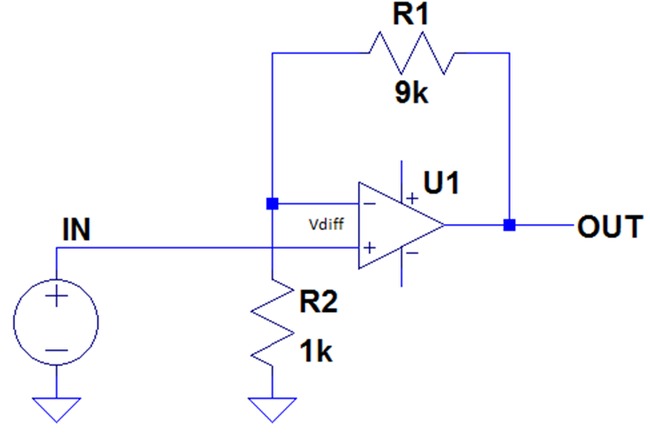 Here is the bode plot I plot for the gains: 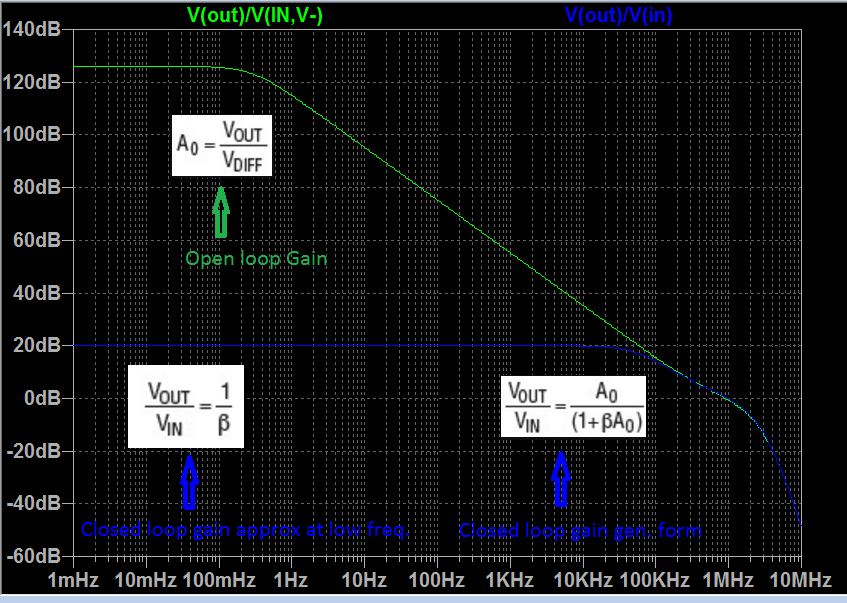 Here is the summary of what I understood so far:

Basically the gain of the circuit G = Vout/Vin is actually dependent on the open loop gain Ao. G is approximated to Vout/Vin = 1/β for low frequencies, however the general form from the feedback equation is Vout/Vin = Ao/(1+βAo). Ao shows single pole LPF behaviour and decreases in such fashion as in the plot. Since Ao decreases with frequency and since the circuit gain Vout/Vin is directly related to Ao, one can obtain the blue plot in LTspice as Vout/Vin. And open loop gain Ao as in the green plot can be plotted by the ratio Ao = Vout/Vdiff. Another point the article mentions is that when the freq. increases Ao decreases and the circuit fights with this change and tries to keep the Vout same. Since Vout=Vdiff*Ao and when Ao decreases Vdiff increases by feedback.

My question is about interpreting the following plot and seeing the weirdness when the β*Ao=-1 in time domain. The article continues as: 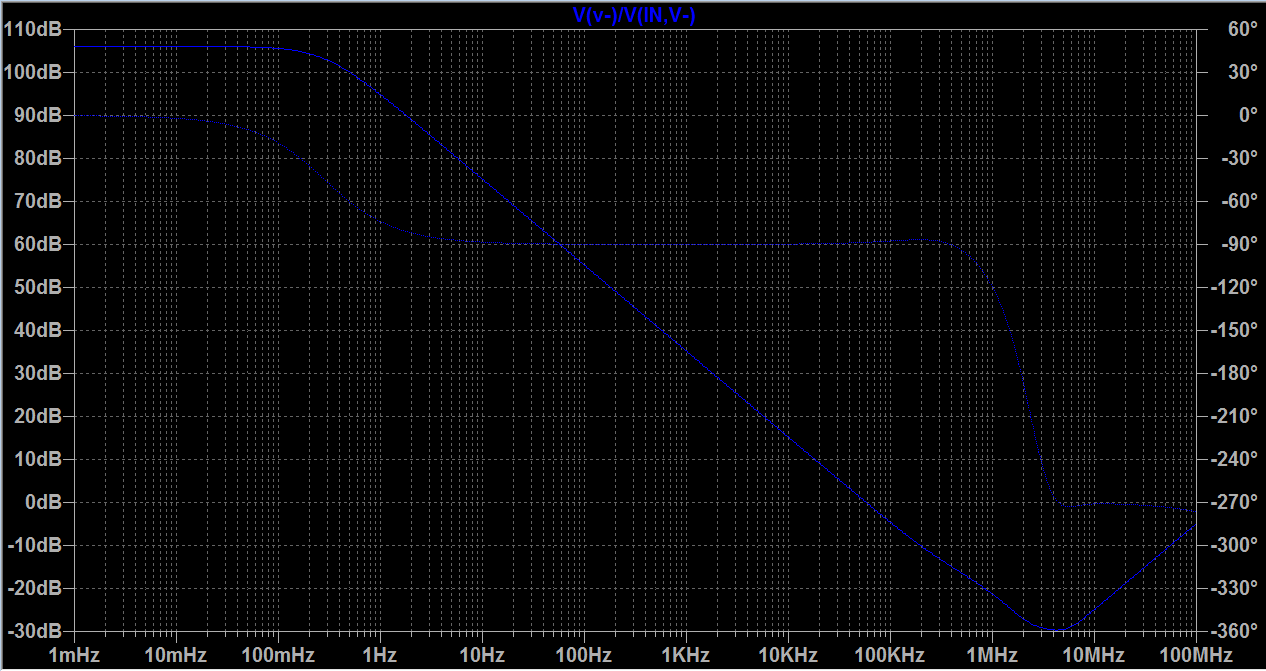 How can I interpret the above plot for βAo? I mean is there a point in this plot where there βAo=-1 (unity gain with 180 degree shift)? If not, does that mean this circuit is never unstable?

And is it possible to see this β*Ao=-1 effect on LTspice time domain?

I followed the user analogsystemsrf's suggestion and added a 10u capacitor at the output. Below the plot of β*Ao. 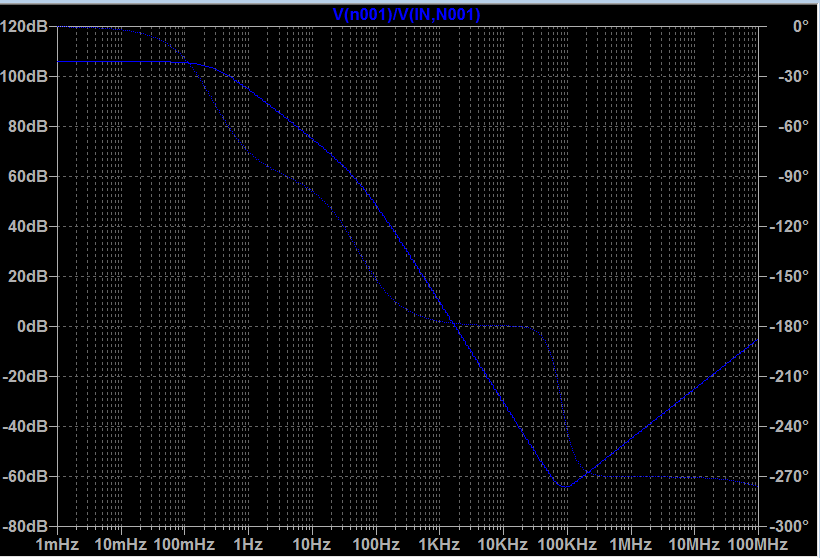 Here is the new Bode plot of Vout. 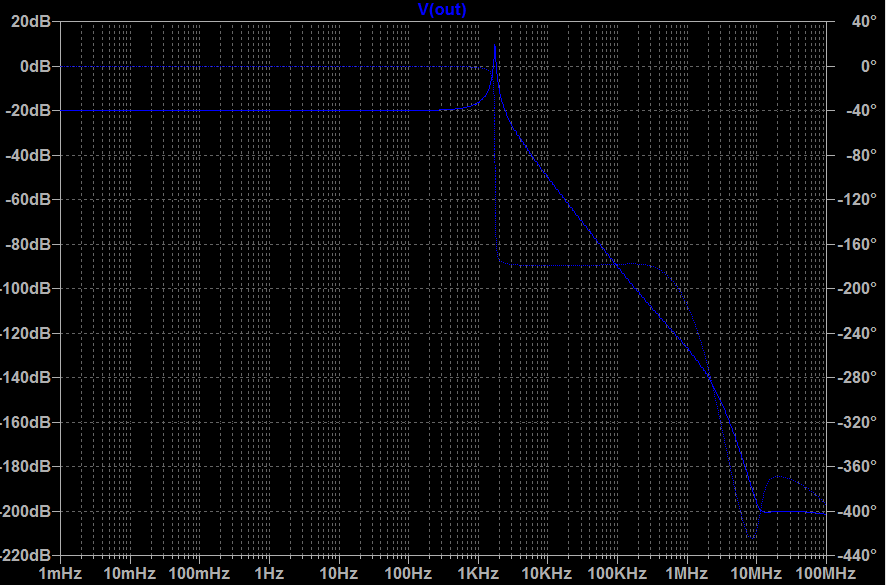 Below is the plot of Vout in linear scale:

And below I sweep the 10mV AC input upto 4kHz 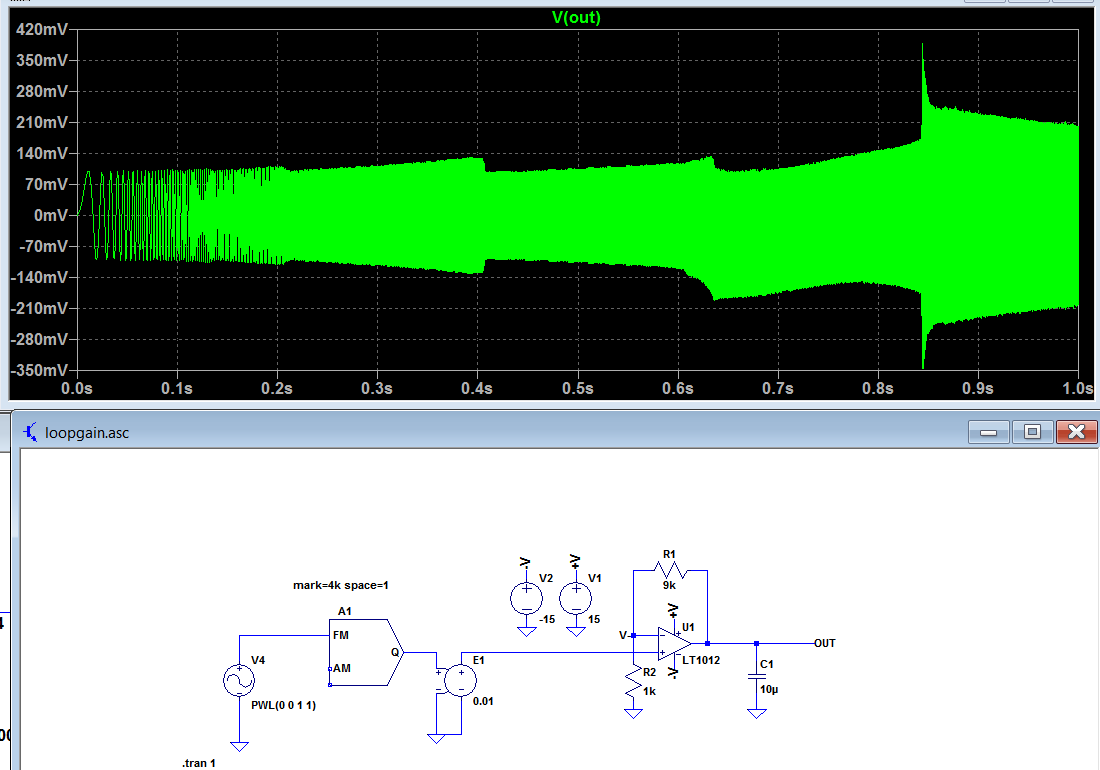 1-) If you look at the βAo plot, 0dB and 180 degree never crosses. When 180 degree phase shift the dB is -40dB and when 0dB the phase shift is 178 degree. So it means its never βAo=-1. But still one can see some peculiarity on the plot. Why is that so? I mean for oscillation is this a must there must be a point exactly where β*Ao=-1 ?

2-) If you see my plot Vout in linear scale you notice that it makes a peak at around 1.7kHz. But when I sweep in time domain the peak I observe is at around 3.4kHz(the last plot above). Why is Bode and time domain shows this twice different way? 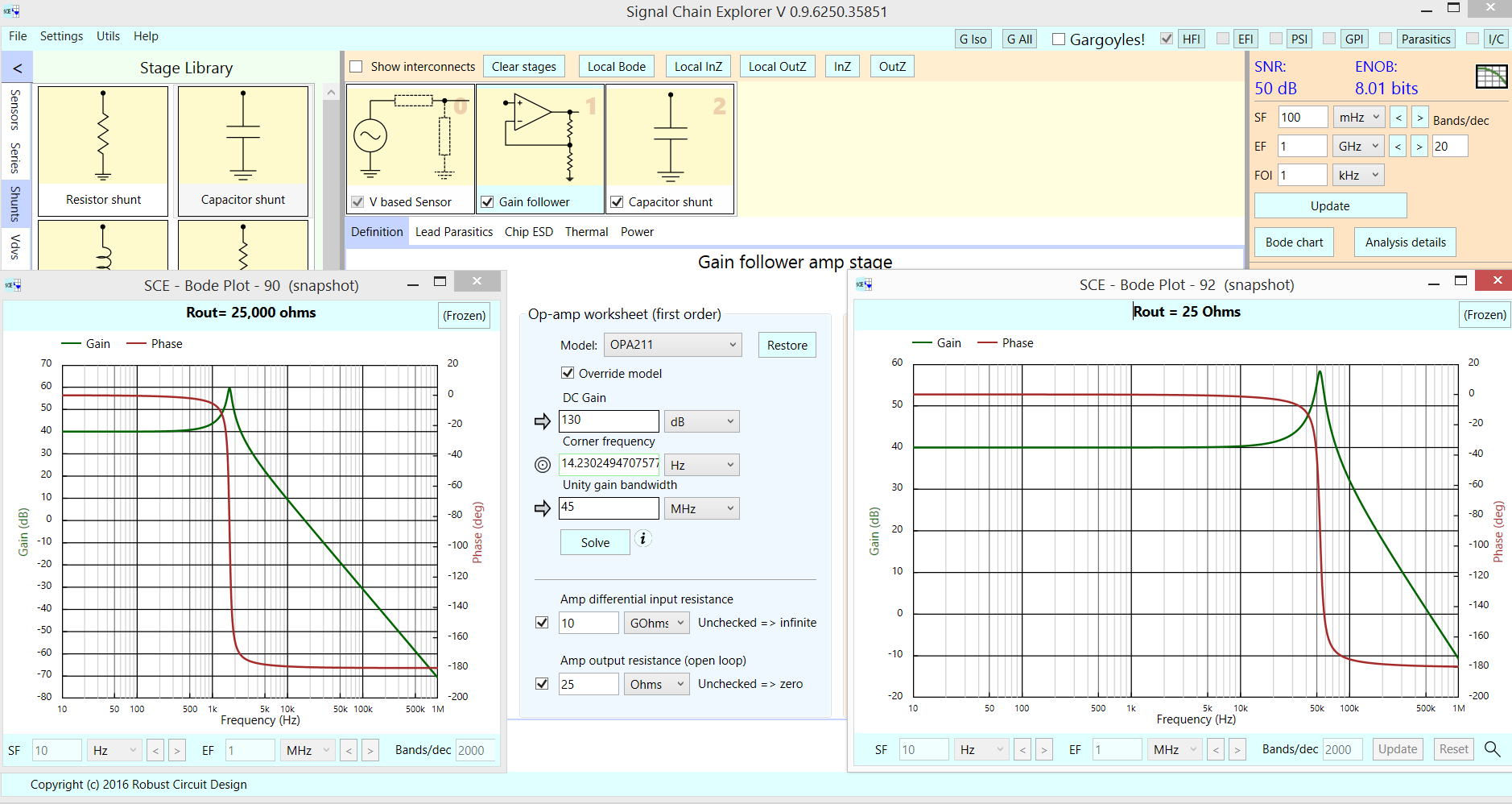 For more understanding, read up on Barkhausen's 2 criteria. They relate to the Nyquist plot/point crossing.

Op-amps are multi-stage high-gain differential amplifiers, and all stages behave like first-order low-pass filters. Combining 3+ stages, at some frequency, there is a 180° phase shift.

If, at this frequency, the gain was ≥ 1, then the simple voltage-follower circuit (with op-amp’s output directly connected tho the inverting input) would be unstable.

For this reason, most op-amps are compensated: an extra low-pass filter is added, on purpose, to ensure that the gain will be < 1 at the frequency were the phase shift is 180°. They are called “unity-gain stable“ op-amps.

With the circuit you consider, the resistors attenuate the signal by a factor 10 before feeding it back to the inverting input. If the op-amp is unity-gain stable, then, with your circuit, the total gain at the frequency were the phase-shift is 180° is < 0.1. So yes: your circuit is never unstable.

Note that there exist some op-amp that are not unity-gain stable. They are specified for a minimum gain, and may be unstable if you try to configure them with a lower gain. (Yes, as strange as it may sound, a low gain may cause instability, not a high gain.) Although they’re not really op-amps en example of such components is Microchip’s MCP6N11, with some versions unity-gain stable, and other that are only stable at gains ≥ 100.