How to turn on a device with only 1 wire between itself and switch?

I want to send a signal between 2 isolated DC-powered circuits using only single wire connecting them. If possible, I'd like to avoid wireless solutions.

I have a broken doorbell installation which I'm trying to fix. Doorbell itself operates on rather low voltage (around 6V). This is a weird custom installation, which most likely doesn't work, because something happened years ago to the initial power supply. I wasn't able to trace the cables to any useful culprit.

What I was able to deduce so far:

In the simplest form, the circuit must have looked in the past somewhat like that:

What I want to do is to make 2 separate circuits with 2 separate power sources. First one for the swtich outside the apartment and the second one for the bell inside the apartment. I want the first circuit to notify the second circuit that someone pressed the button via 1 existing cable. I guess it is possible, but I'm not sure what components do I need to use to make it work.

Then, I though that maybe I can use less dark magic and make use of basic components like... transistors?

In the end I want to have something like the following:

What magical components can I use in a place of Magic 1 and Magic 2?

PS. Yes, I marked a doorbell as an LED.

If you want to wrestle a little and not to go over, where the fence is lowest(=ready to use wireless system), you can try the following: 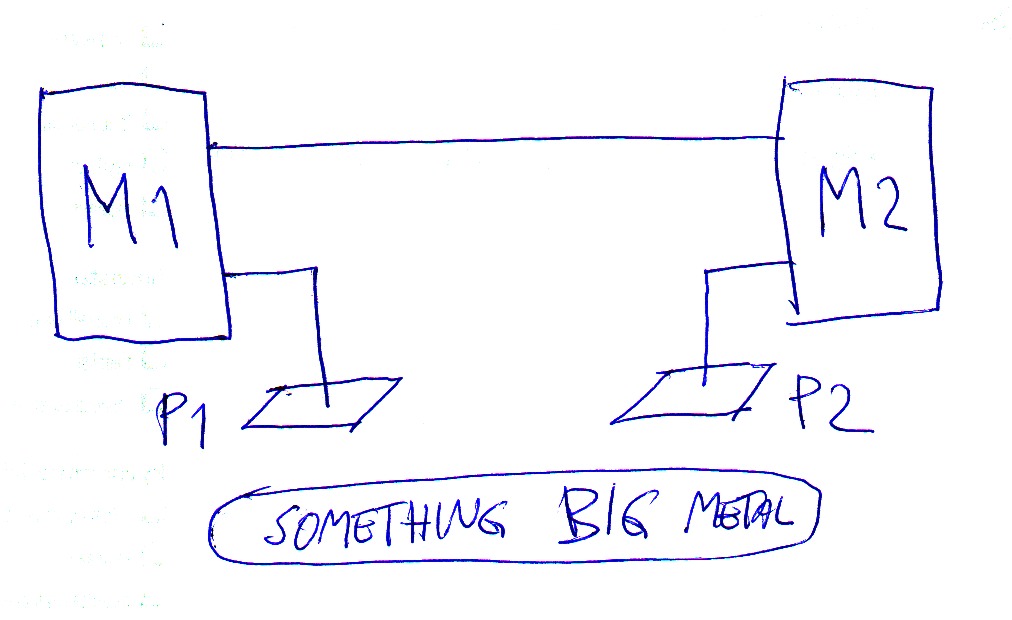 M1 and M2 are the magical units. You can probably connect capacitively because there surely is some big metallic parts - for example electric cables - that are quite near both magical units. P1 and P2 that make the connection are insulated metal plates or long enough insulated wires.

You need quite high frequency, at least 50 kHz. Also you must modulate something detectable to avoid false alarms. So, let M1 be a 50 kHz oscillator + a pulser that amplitude modulates the oscillator by 500 Hz. M2 is the following:

Note: 1) The receiver must be on continuously 2) You must have quite pure transmitter signal to stay off from radio bands. An easy to make square wave transmitter can disturb AM radios at several hundred meters.

Well if you are lucky and what your switch is doing is grounding a pull-up resistor, you can get by with connecting the high V side to ground with your cable. If it's completing the circuit I don't know if you can do much

Not the answer you're looking for? Browse other questions tagged microcontroller transistors digital-logic switches dc or ask your own question.

0
How exactly should I build a smart wall light switch for a smart home
1
Integrating wireless transmitter with old door chime system
2
Electronic switch with negative and positive voltage
0
Operate a switch from a USB port
6
Switch between 2 power supply feeds without device losing power
0
Home door "open/close sensor" without installation
1
Can a transistor send negative voltages when used as a switch?
1
How to make an audio 5.1 switch?