After reading about some of the photodiode characteristics on the internet I got really confused with the photodiode working principle. I tried to search for them in google , got some definitions , but it still confuses me a lot.

I found a topic on the internet which indicated that "photodiode is in reversed biased while LED is in forward biased" ?

So , is the reversed bias here photoconductive mode of photodiode ? 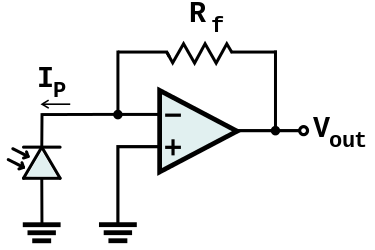 A problem that came to my mind is that , in the figure above , do i connect the longer lead of photodiode to ground or to the negative node of op-Amp ?

And does the current direction through photodiode is opposite to its indication in any mode (photoconductive or voltanic), for example like in picture above (photodiode "points up" while current goes from negative node to ground )?

You can connect the photodiode in either direction (anode to GND or cathode to GND). Both variants work; the difference between both variants is just the polarity of the signal.

(You need to look up in the datasheet of whatever diode type you are actually using to find out which of the leads is the anode/cathode; or just measure direction of conductivity of the dark diode).

BTW: there is no reverse bias voltage as both OpAmp inputs will have about the same potential, i.e. the voltage across the diode will always be very close to 0V. The Output voltage of the OpAmp will create a current through \$R_f\$ that will exactly compensate the photo-current created by the diode.

The diode works in photovoltaic mode.

When light falls on the photodiode, currents flows in such a direction to forward bias the PD. If you flip the PD in the shown circuit you'll get a negative output when light falls on the PD (assuming the op-amp has bipolar supplies such as +/-5V). If not, then it will rail near (or fairly near) ground, depending on the type of op-amp. The PD (as shown in your schematic) effectively tries to pull the inverting input below ground, and the op-amp supplies current through Rf to try to maintain the inverting input at 0V (it is a virtual ground). The output voltage is (ignoring op-amp imperfections) the PD current multiplied by Rf.

Your PD datasheet should indicate which lead is which (eg. from this datasheet: 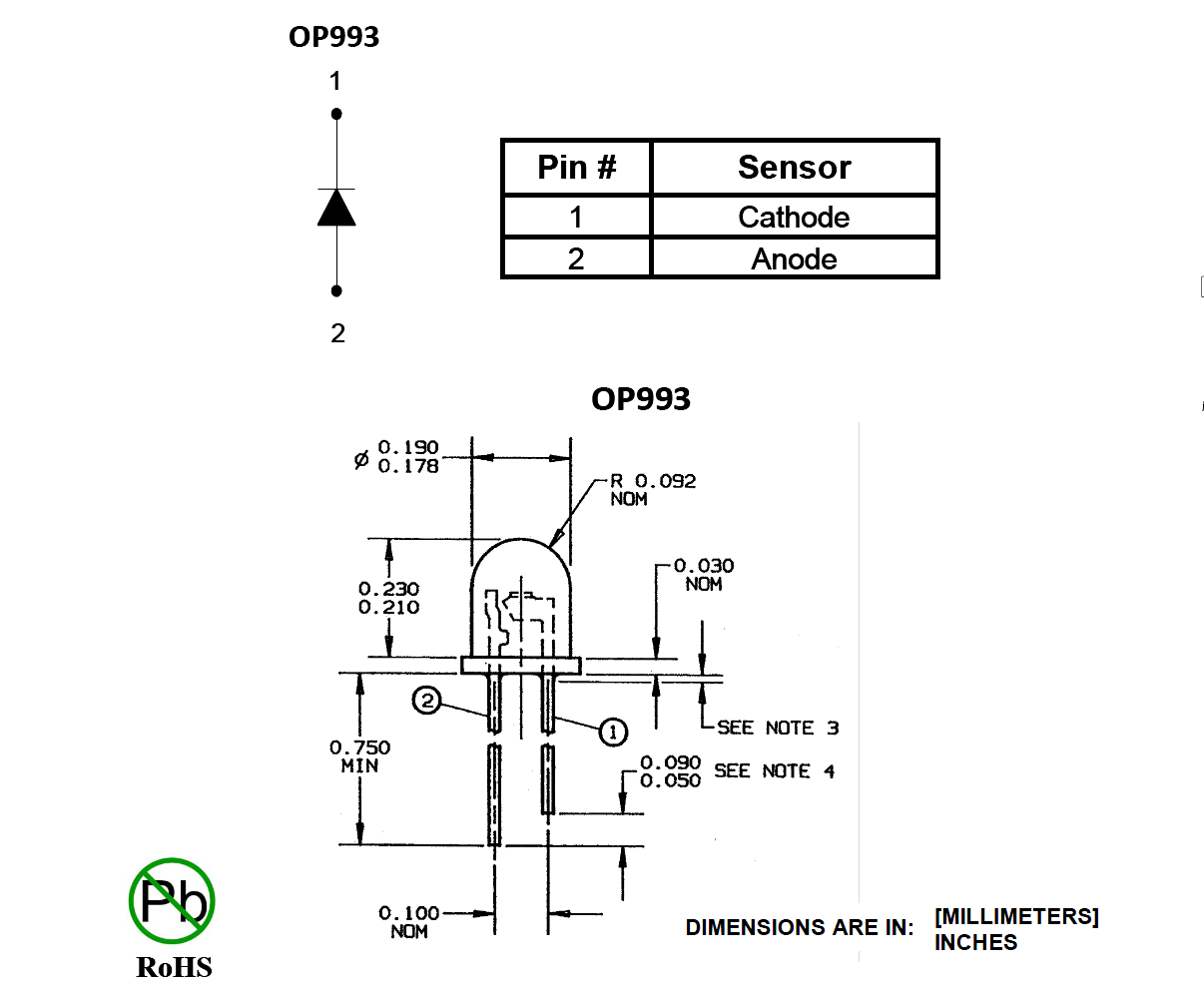 You can see that the longer lead is the anode (pin 2), so you would connect the longer lead to ground. Most (perhaps not all) are probably similar to this. It won't hurt anything in this circuit if you get it wrong so if you for some reason don't have a datasheet, just try it. You can also test the PD with the diode test function on your multimeter.

This kind of circuit is very simple, however it is not very suitable for some applications. The PD has high capacitance when the voltage across it is near zero so the output will tend to be noisy and the op-amp may even oscillate without a cap across Rf.

Edit: To try to make the word soup a bit more clear, below is what I am trying to describe in the comments.

No, your photodiode is not reverse biased in the circuit shown. In fact, both the cathode and anode are at ground, so there is zero bias. 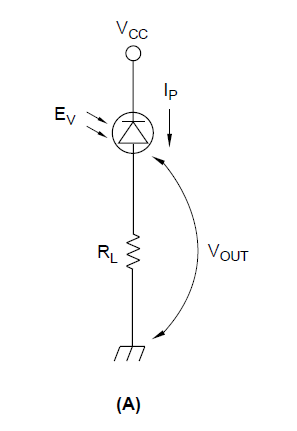 In the figure above, from a superb application note from Sharp (which I can no longer find at Sharp, but it is available at http://educypedia.karadimov.info/library/Sharp%20photodevices.pdf) the diode is reverse biased. The Cathode is at a higher potential than the Anode. This is what's meant by reverse biased. The advantage of reverse biasind a photodiode is higher speed and dynamic range, the disadvantage is higher dark current. 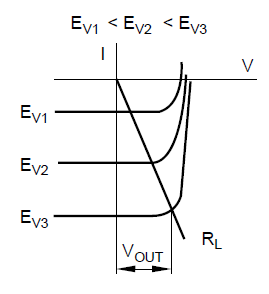 In the feedback circuit you show, the voltage drop across the diode is zero, thus you are moving up and down the V=0 line in the figure above (from the same document) as light intensity changes. Note that photocurrent is a leakage current, from Cathode to Anode, always. The output of your circuit will be the product of the photocurrent and the feedback resistor.

The "bias" of a photodiode refers to the voltage across it, not the direction of current through it (though the two are certainly related).

I suppose you can most accurately call your circuit "photovoltaic", but that's still a transconductance amp. If you attach the anode to a negative voltage instead of ground, it's now reverse biased, and will be faster. Instead of moving up and down the V=0 line, you'll be operating about some negative voltage, but there won't be much difference in the output behavior (aside from a larger dark current and faster response). Also, if it weren't in a feedback controlled mode, you'd have a wider linear output range for a given load resistance, as shown in the figure below (same doc) 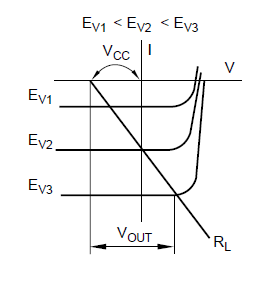 A photodiode is just a diode packaged to detect light. To form a diode semiconductors are doped to form n-type, with extra electrons, and p-type, with holes where electrons could be. Putting these two types together at a junction forms a diode. In this configuration electrons in the n-type and holes from the p-type diffuse across the junction. Near the junction this leaves a field with positive charges in the n-type and negative charges in the p-type. Any charges near this junction are removed by this field. Since there are no charges left near the junction it is called the depletion region. Charges randomly occur in the depletion region and are swept away causing a current to flow. The rate these charges happen increases with increased energy. So adding heat or light at the junction will increase the number of randomly produced charges. This increases the reverse current. The photo diode is typically run with small reverse bias. The light has the effect of increasing the reverse current. The diode in the circuit you showed is in photodiode mode.

Not the answer you're looking for? Browse other questions tagged current photodiode mode or ask your own question.

26
Does this photodiode circuit work?