Is there any way to inhibit this latch circuit from locking up at startup?

Using an opamp (in+ is fixed 4V ref, in- is a square wave 5/1V), I have an NPN-BJT in the feedback network, and this BJT acts like a latch; once the output goes "high" the BJT pulls in- to ground, effectively latching the opamp to high output until power cycle.

Works perfect in a simulator.

But, in Real Life(tm) there is a quirk that the simulator misses; immediately after power-up, before the power rails and all inputs are stabilized, in+ is higher than in- (which takes some time), so the latch-up happens immediately, which is quite bad.

I've pulled my hair trying to slow down in+ a bit, but realized it's simply not possible. What I need to do is grounding the opamp-output for about 0.5-1us (i.e. disallowing the latch) until all is stabilized.

Is there anything I can do to achieve this? Board space is limited, so if I need an IC + discretes it should be about an SO8 in size. 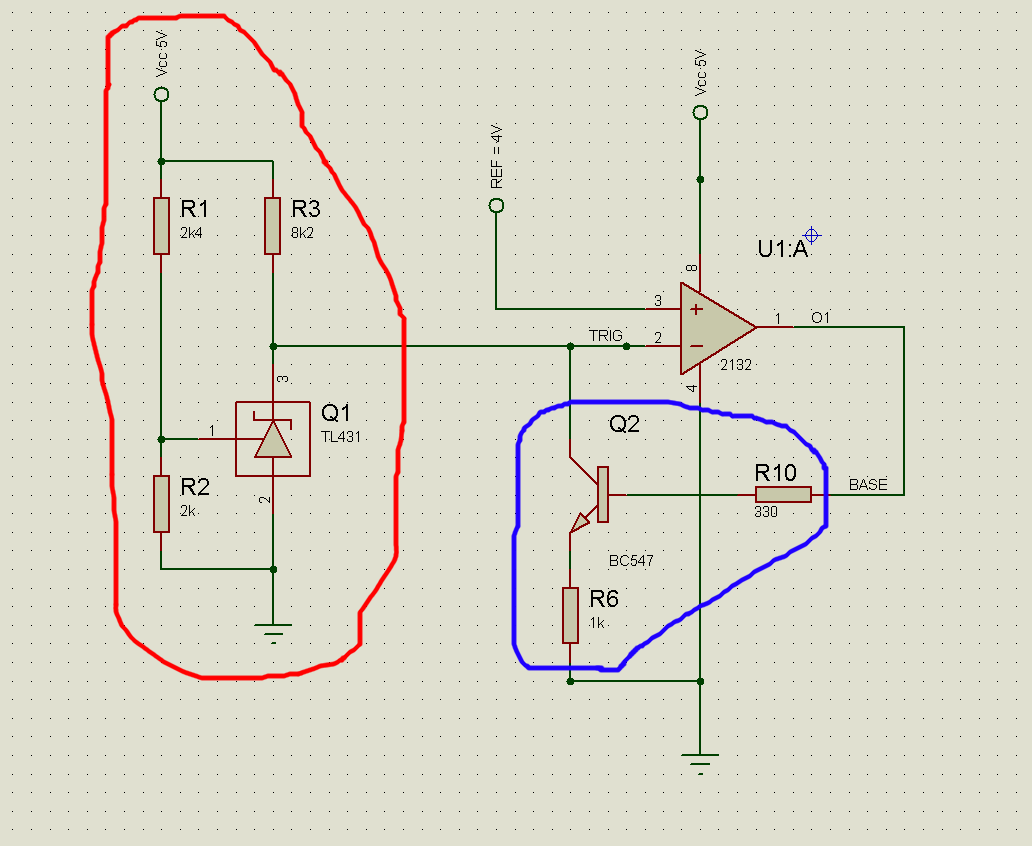 The opamp (OPA2132) is connected as a comparator. In+ is a fixed reference to which in- is compared to. The whole circuit is a voltage monitor, so the output of the opamp is connected to a PMOS-gate (which is controlling the power line to the application).

Now, disregard the BLUE area for a second and consider RED area + opamp; this works just as expected. When the voltage is tripped (> 5.5V), pin 3 goes low, meaning that in+ is higher than in-, and opamp goes "high".

Now, the BLUE area is a latch feedback. When voltage is not tripped, in- is higher than in+, opamp is "low" and the BJT is cut-off, i.e. no latch. But when the opposite is true, when the voltage is tripped; in+ is higher than in-, opamp goes "high", BJT gets saturated and pulls down in- to ground. That is, the BJT permanently latches the opamp to "high" state.

This worked perfect in the simulator, but as I wrote above, it does not work in Real Life because - I think - the voltage rails hasn't been stabilized so in+ is initially always higher than in-, making the BJT latch immediately.

If I in this premature latch disconnect the BJT-emitter from ground and then re-connect it, the latch is gone and the whole circuit works as expected (latching only when the voltage is tripped).

For this voltage monitor to work as I want, I need the latch. That is; once the voltage is tripped, the only way to release it should be to power cycle the whole unit.

I yet haven't measured for how long it takes until the power rails and all inputs are stabilized, but is there any way to make the latch work as I want? Like, pulling the opamp output down to ground, once, for time X during the startup? Or delaying in+ for a while so in- manages to reach its initial level?

Or anything at all?

(If I sound too desperate it's because I am; I've been pulling my hair for days)

I've pulled my hair trying to slow down in+ a bit, but realized it's simply not possible.

Of course it is possible - it's the same circuit that keeps a microprocessor in a reset state when power is applied.

R is in series feeding the op-amp input and the C is from the input to 0 volts. Also, to discharge the capacitor when power is removed, a normally reverse biased diode across R will be helpful.

The low pass filter will indeed keep the reference under your threshold during power up, however it also adds a small issue to power glitches in that the capacitor may still be charged when the power returns.

As such it is prudent to add a fast discharge path to the top of the capacitor to handle that event. 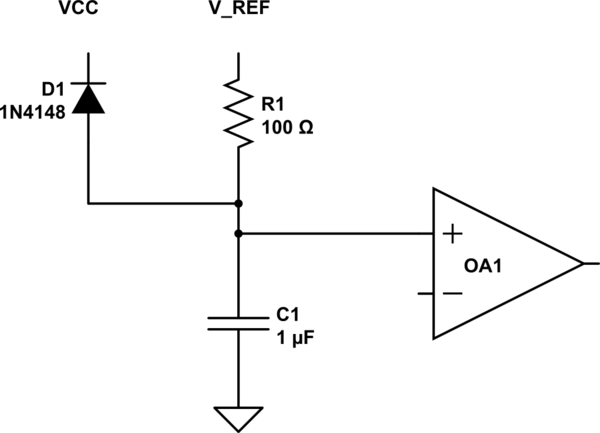 Not the answer you're looking for? Browse other questions tagged operational-amplifier voltage-regulator bjt latch or ask your own question.

0
Voltage limiter is shutting down completely when tripped
0
Starting a latch in a known state
1
What OpAmp configuration is used in this circuit?
1
Opamp positive feedback circuit problem!
0
Setting maximum opamp input voltage by zener diodes with respect to supply voltage
2
What am I doing wrong with this LM393?
0
How can I keep this MOSFET in cut-off when Vcc > 5.5V?
1
How can I modify this circuit to if once the battery turned off, never turn on again or turn only when min. ~0.5V increased?
0
Safety switch to latch when power turns off till reset