What is the difference between nodes and terminals?

So my textbook uses both of these terms but doesn't really give clear definition of each which is starting to lead to some minor confusion. I was reading a Wiki entry on ports which stated

A port consists of two nodes (terminals) connected to an outside circuit...

But this sort of confuses me because to me that is saying that each terminal is its own node. 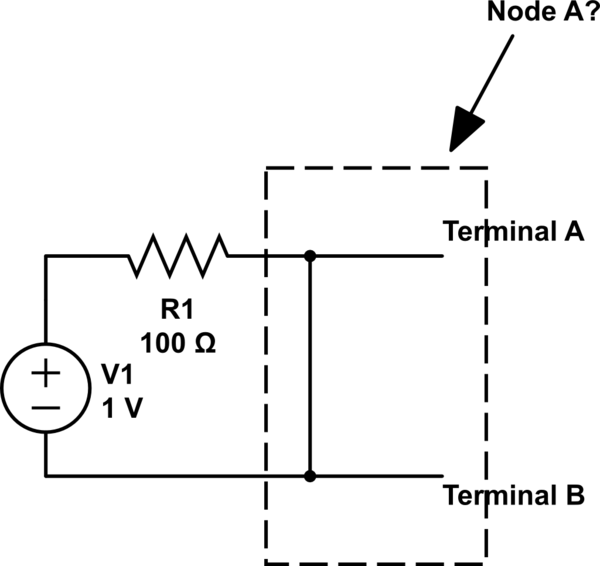 In this random example (I've encountered this when shorting the circuit between terminal a and b in problems) wouldn't these two terminal share the same node? How could they be separate nodes? Any type of clarification would be greatly appreciated!

A node is a point at which two or more circuit elements meet (e.g. a resistor and a voltage source). Wikipedia's article on a circuit node includes a drawing which highlights each node in an example circuit in a different color:

A terminal is a connection point to an external circuit. A terminal is usually a type of node, though by shorting two terminals they become a single node. If you connected a resistor between the two nodes instead of shorting them with an ideal wire then each terminal would also be a separate node.

Terminals are the wires that let you connect to a component. For example, a resistor has two terminals. A BJT has three terminals, etc.

A node is all the wires in a circuit that are connected together by a low enough resistance that we can ignore it.

So you might connect a terminal of a part to a node in a circuit (which is also connected to other terminals of other parts). You might even connect multiple terminals of the same part to the same node of a circuit (like in a diode-connected transistor).

Not the answer you're looking for? Browse other questions tagged terminology terminal or ask your own question.