During my commute every morning in the bus with nothing else to do, I have a strange tendency to notice antennas on the roofs of buildings. Almost every building has a Yagi, which I've been told is for TV reception.

Another one which I see that quite many buildings (mostly larger office buildings rather than homes) have is a monopole antenna with radials. Like the one in this picture, except with a longer radiating elements: 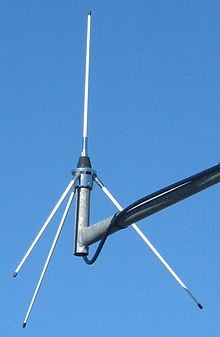 I'm curious, what is the purpose of this antenna? And I am familiar with the characteristics of this antenna (such as the radiation pattern, etc.) but I am curious as to what they are used for. I see them alot and they all appear to be for the same purpose as they seem to be approximately the same size (thus intended for sending/receiving on the same frequency band). It's difficult to estimate the length for distance as they are quite high but they are maybe somewhere between 4 and 6 meters.

Do they maybe have something to do with TV, telephone or Internet (seems unlikely). I have only limited experience with telecommunications engineering so if anyone knows the purpose of the antennas, if there is a probable common purpose, I would be interested to know.

EDIT: One of the buildings that has this antenna is the offices of a government agency that deals with people's pensions. Another building with this antenna is a construction company.

Probably a VHF band pager antenna. They are usually on top of tall buildings.

This is probably a VHF FM radio broadcast antenna (88-108 MHz) or antenna for an FM radio repeater (increasing coverage in dead zones etc) like this:

If it is on top of government buildings it could be part of the FM emergency broadcast system.

16
How does a Theremin "antenna" work?
0
Radio direction finding - dependence on source signal type
1
Choosing the right Antenna for radio chip
0
DIY Antenna with minimum components for proof of concept
1
How to Use a 2.4GHz Chip Antenna for ESP32 Design
1
Why is my best placement of a directional antenna so weird?