I stupidly fitted the wrong power rating resistor and (no surprise it failed) its taken me a while to realise my mistake. I believe the correct resistor is fine (it ran for a significant amount of time and is double the power) but I am a little bewildered as to how I calculate the rating and prove it theoretically

There is even a graph in the datasheet telling me the surge rating isnt adequate and I am interested in how they calculate these curves so I can apply the calcs to other resistors where they arent so helpful to provide a graph.

Here is the plot: 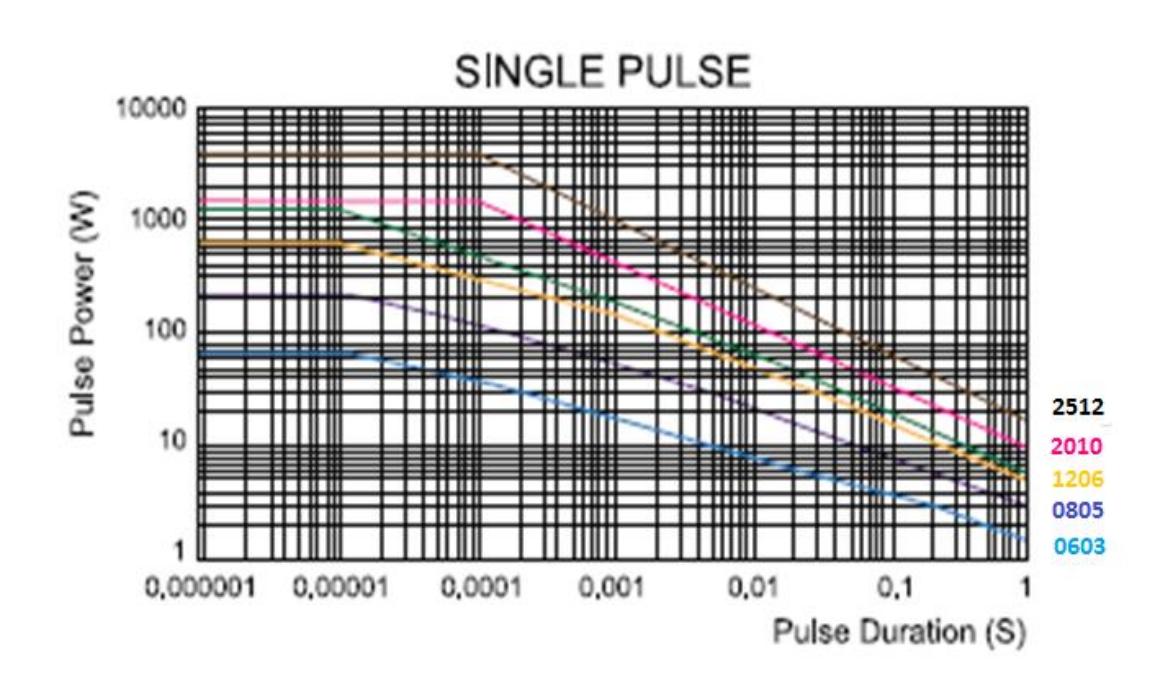 I measured the inrush with a scope (100VDC supply) and its a little over 40A, the theoretical max is over 60A but there is a reverse polarity protection diode and fuse and PCB trace and cap ESR reducing this. 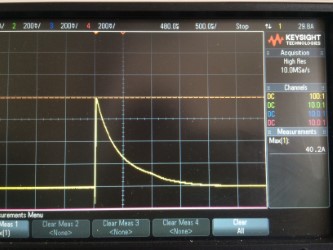 As can be seen the surge has decreased to 50% of the peak after approximately 0.5ms so I believe I can treat this as a square wave with a width of 0.5ms as a decent approximation (like the EMC standards advise for TVS diodes etc)

Vishays Pulse Load on SMD Resistors: At the Limit (again not enough repuation to add link)

I understand that periodic pulses require more derating than a single pulse (thats logical) at what point a single pulse becomes periodic is another topic as probably all electronics needs to be turned off at some point!

Gives me a value of 1.515W (absolute max) and I can see if applied surges more frequently then the power increases (which is what happened when the resistor failed)

Looking at the graph from the datasheet (isnt easy on the eye) but with 20.1A through the 3R3 resistor then thats a peak power of 1333W

The graph from the datasheet doesnt seem to agree for example derating for a 0.001 pulse time (for a convenient point to read off the values) the graph says approx 1kW max peak pulse power where as the calculation says that the average would be approx 3W which is double the rating of the resistor

I think I have spent too much time looking at this and simply need to go to bed and wake up fresh, I am confused if I am doing this right or do I just not have a clue!

I can calculate the energy into the capacitor but not sure what I would do with that, is the method right? is there a better way? Is this the way to do it when the manufacturer dont specify pulse/surge ratings?

Any advice is much appreciated

Heat flow takes time. In cases where nearly all of the energy is devoted to raising the temperature and where little useful portion of the heat is allowed to have time needed to significantly flow into its surroundings, then you can use the "action integral of the pulse" to estimate failures. If you can find a specification in "Joules per Ohm" or "\$I^2\cdot s\$ for the resistor, then you could apply it. If not, you'll have to use those curves to make estimates.

The above kinds of specifications are more commonly found for fuses, because that's the job they do and are therefore specified to do. Resistors, on the other hand, are actually designed to dissipate. So this adds another factor to consider.

This is a hot-spot calculation and it's probably only good to a few times the chart duration, where other factors allow the dissipation to stabilize at the rated power. They only show the curve going out to a second. But the above equation might work for a bit past the end of that curve. Regardless, it gives you an idea.

If I did the integral right, the energy delivered into your R, by your RC circuit, is the following function of time:

The curve does indicate that, given a little more time, there should be enough time and therefore no remaining problems. But this does seem to suggest a corner case problem when using a single device.

I gather you are using two of them and still having problems. (I'm not sure how all this is mounted and that could also be important.) In any case, if you plug in the \$1.65\:\Omega\$ paired-resistor equivalent, you get \$812\:\textrm{mJ}\$ for both. Which, divided between the two still exceeds the spec (by only a little.)

Just an added note because I had to make a correction to the first equation above, for \$t\lt 100\:\mu\textrm{s}\$. I had just made it a constant before, but it really is a function of time. Less time? Less delivered energy. The curve's flat line there makes that apparent. I'd just failed to account for it in the equation.

I can see why you are having troubles.

Lets compute the temperature rise from one pulse, assuming the heat remains totally INSIDE the resistor. If 5 degree Cent, its OK, right? But if 5,000 degree Cent rise, its (already been turned into plasma) not OK, agreed?

We need to know how much heat the resistor can store internally. Here is a useful number: the specific heat of silicon (like the pure stuff, used as silicon wafers) is 1.6 picoJoules per cubic micron per degree Centigrade rise.

I'll let you convert the resistor size into microns, Length, Width, Height, and compute the total volume. Assume the resistor has a clay/ceramic base on which the metal film is deposited. Heat is generated in the film, and quickly flows into the silicon/clay/ceramic base.

1mm cube 0.014 seconds (14 milliSeconds) which is about the size of SMT resistors

0.1 micron cube 114 picoseconds (approximately the thickness of the conductive layer of FETS

EDIT In my opinion, the thicker the resistive region, the more survivable is the resistor. In thin films, the heat has to flow into the clay/silicon bulk. In a carbon composition resistor, most of the resistor body comprises the resistor; result is the heat is generated throughout the resitive-bulk and well exploits the entire mass as an immediate heat sink, because the heat has no where to go, except out the leads. With that in mind, examine this diagram:

Let's discuss the energy storage of 1mm cube resistor. You have an energy storage challenge. At 1,000 microns per side, that cube has 1 Billion cubic microns of volume. Assuming the entire resistor---- resistive region, outside protective glaze, and any interior hard-ceramic base ---- have 1.6 picoJoules per cubicmicron per degree Cent, your heat capacity is

Now divide 650 milliJoules / 1.6 milliJoule (for a 1milliMeter cube volume) and the rise in temperature is 400 degreeC. Solder melts; aluminum creeps.

Not the answer you're looking for? Browse other questions tagged resistors derating or ask your own question.

1
Selecting the power rating of resistor