I am working on a project to control heavy loads with Arduino up to 10 Amperes. I found the circuit which is made using p-channel Mosfet and a p-type transistor. I am confused in the flow of current through the circuit. I uploaded the diagram please see if the conventional current flow is right in the diagram? and what about the current through the red box (Gate of Mosfet) what will be IL=?. If the input current is up to 10 Amperes does it effects my arduino digital pin? Also if you have any recommendations regarding the circuit please share them. 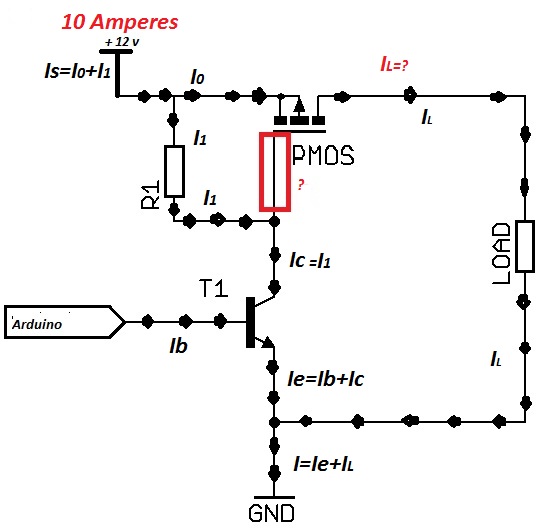 MOSFET gates are very high impedance, so no current (or almost no current) flows into them in steady-state conditions.

The red element can be a wire. Often a small resistor is used to damp unwanted radio frequency oscillations that are common in fast pulse circuits with no precautions.

If this circuit is properly realized, I1 is only a few milliamperes, the major part of the Is goes to the load.

Those arrows make everything hard to decipher, but they look correct.

The gate of a MOSFET behaves pretty much like a capacitor. So a current will flow into or out of the gate only when you are switching. (The amount of gate charge should be found in the datasheet.)

The source/drain channel of a MOSFET behaves pretty much like a resistor. (The resistance (RDS(on)) should be found in the datasheet.) In a MOSFET rated for large currents, this resistance typically is very low (milliohms), so it's usually ignored. In other words, you can assume that the load behaves as if it were connected directly to +12V.

If the load is inductive (e.g., motor, relay, transformer), it can generate large voltage spikes when switched off, and you need to add a snubber to protect the rest of your circuit.

Since the voltages throughout the circuit weren't labeled or discussed, perhaps your question stems from a common misunderstanding. This is the misconception that circuitry is based on electric current ...and that to understand circuits, we sketch in all the currents.

Actually, engineers and scientists view most circuits as voltage-controlled systems. Everything is powered by constant-voltage supplies, and the signalling is voltage-based. To understand a circuit, we sketch in all the voltages. Then, using Ohm's law, we can determine the currents if necessary (or even ignore them entirely, and instead concentrate on input/output voltages and load wattage.)

For a nice animated view of voltages (and currents) inside circuits, try the little simulator at Falstad's site. (a java applet)

For example, the current in the gate-wire of the PMOS remains zero, whether the transistor is on or off. MOS transistors are voltage-driven devices, and their gate-current is usually irrelevant.

To analyze this circuit, notice that transistor T1 and resistor R1 form a voltage-divider between 12V and 0V. When T1 is on, T1 forms a short circuit to ground, and it pulls down the PMOS gate to zero volts. When T1 is off, it acts like an open circuit, and then R1 pulls the PMOS gate up to 12V.

In other words, T1 and R1 have converted the Arduino's small output voltage into a 12V signal. This 12V signal then drives the PMOS transistor gate.

The PMOS transistor is wired as an inverter: when the voltage on the PMOS gate is zero, that transistor turns fully on, and when the voltage is 12V, it turns off. (Yes, it should handle 10amps just fine. If its on-resistance is low enough, it might not even need any heat-sink.)

Also, note that you'll need a resistor in series with the base of transistor T1. The transistor's input acts as a diode to ground, and this diode would short out your Arduino's output pin. (LEDs need a current-limiting resistor, and so does this transistor's base lead.) The added resistor should be around 10x larger than the value of R1 (so if R1 is 10K, then add a 100K resistor to the connection between the Arduino and T1.)

Not the answer you're looking for? Browse other questions tagged current mosfet circuit-analysis power-electronics or ask your own question.

2
gate current direction during turn-ON of P-channel mosfet
5
Low-side MOSFET: Current seems limited
6
How does the drain current flow in a MOSFET when the channel is pinched off?
1
MOSFET source to drain Current
1
What is the conventional circuit to control a P-MOSFET with MCU?
0
MOSFET has constant current
0
How can a grounded gate MOSFET conduct current?
1
P Channel Mosfet driving current