I will start by explaining the problem to make my question clear.

During the production of diapers , the machine need continuous supplying material. So Butt Splicer is used to attached the end of expended roller with the start of the next roller using double sided tape. So in the production their will be a defected diaper ( a diaper which have a material with double sided tape on it. There is some methods to reject the defected diaper during the process . But to ensure that this diaper is rejected , a Metal Foil Tape is used with the double side tap, and a metal detector used after the packaging to reject the bag with the defected metal.

And here is the question,The client want to find these diaper s with metal while they are in the diaper bag without opening the bags and checking every diaper with the metal detector. A normal metal detector which will generate a magnetic field will detect if the metal is on the bag because of the shape of the magnetic field. So I need a sensing method with linear detection ( to scan diaper by diaper , So the scanning depth most by more that 20cm and the thickness at least 3mm.

A device to identify the position of a defected diaper in the bag. 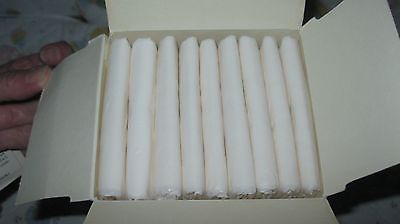 (This picture is only for showing how the plastic poly-bag will be align from the top side) and once a metal is founded, a marker will mark the position of the diaper in the bag , so the operator could find the defected diaper and identify to the technician which material is not rejected in the process.

Pretty much all industrial/food metal detectors I've come across will easily detect the presence of metal foil tape in one diaper in a box of several diapers. It will probably register as a massive signal. I've designed them so I know how sensitive they are. For instance, a metal detector with an aperture of 14" x 7" can easily detect a 1 mm diameter piece of iron running through the centre of the aperture. On one application I remember, you could regularly detect the presence of iron naturally contained in a cabbage.

Finding a thin sheet of conductive tape will be a breeze.

They will also be able to stop the converyor (that you should feed them through) at a place indicative of the diaper that is containing the rogue material. Standard metal detectors like this have an output that can trip a belt motor or activate a reject arm. Pretty standard stuff. 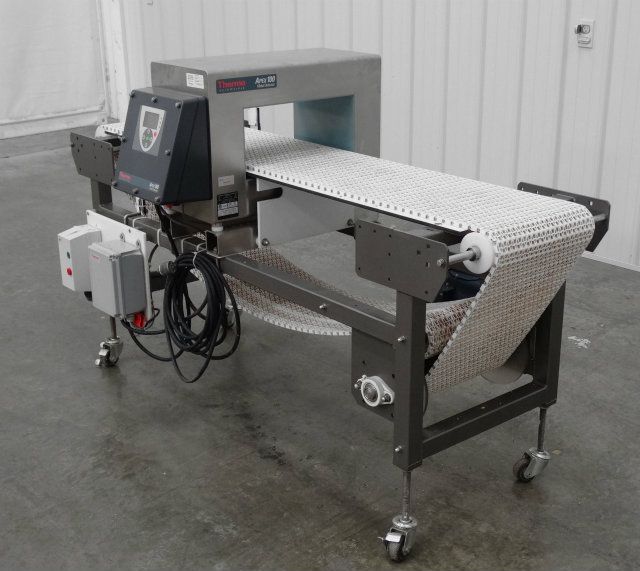 The most basic search heads work with three coils like this: - 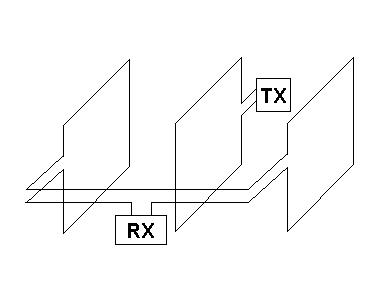 As the metal contaminate passes through the coils, there is a large "positive" signal followed by a sharp zero signal (metal in centre) followed by a large anti-phase (negative) signal. The positive and negative signals largely coincide with the positions of the outer receive coils and, because the geometry of those coils is known, it's a small matter to compute the (fairly) precise position of a rogue piece of metal and stop the conveyor at a fairly precise inspection point.

There are a plethora of Radar movement detectors available such as this which should suit your need. These detectors use a metal horn to diverge the beam so several options exist to make the results usable:

What's wrong with the standard method of detecting metal, a conveyor through a portal with a central exciting coil, and two antiphase detection coils one fore and one aft.

As the metal item approaches the portal on a conveyor belt, it changes the coupling with the fore coil first, creating an output. As it passes the central plane, both coils are affected equally, and the output is zero. As the item leaves the portal, it couples more strongly with the aft coil, creating the opposite of the initial output.

The trick will be to calibrate that central null point very carefully. By knowing the timing of the null output compared to the position of the box as it passes through, the controller will know where in the box the metal tape is located.

So, the intuitive way for me here would be a simple x-ray system: Cathode ray tube above, an array of more or less sensitive detectors (might simply be diodes in reverse bias) below.

However, x-rays are dangerous, so let's keep that as plan B.

You can do the same via detection of radio wave transmissions. My hypothesis here is that diapers and cardboard boxes don't have significanty different \$\epsilon_r\$ or \$\mu_r\$ than air, and thus, practically won't deflect an incident wavefront.

Let's look from above onto the system I imagine:

Now, if you have a piece of metal in that box, the following will happen:

I.e. reflections in random directions, and less transmission straight through the box.

You could either measure the transmitted power and look for changes, or try to catch power going into other directions.

By choosing a transmit antenna (will probably be a horn antenna) and a suitable frequency (probably some 60+ GHz ISM band), you can get sufficient resolution.

A much cheaper, but less accurate method would be to take the whole box, put it in to a metal chamber (needs to be "kind of RF tight", ie. not really a locking door thing) of known dimensions, excite the chamber with a frequency that should nicely resonate in its lowest mode within that chamber, (ie. chamber probably something like half a wavelength) and see how well that works.

Another idea: excite the box of diapers with a strong RF radiation (prototype: microwave oven) that you modulate at an audible frequency. That should make the metal patch vibrate audibly, and you can detect that with microphones.

Hope that helps you get your client happy :) (why are you making money with this and I write answers? Strange.)

take a look at many of the metal detector designs, especially those ones built on a mcu.

my suggestion would be to drive the mcu with an oscillator whose frequency is dependent on the presence of metal. all the code does is to increment a counter.

Pick a mcu with a watchdog timer who typically has an independent oscillator. Activate the watchdog to reset the mcu.

the first thing the code does is to compare the value of the counter (which shouldn't be reset at start) vs. a known value (calibrated to the non-presence of metal). And light up a led if the deviation is too big.

After that, keep incrementing the counter -> that increment will be stopped by the watchdog reset.

The diameter of any low cost cheap metal detector that operates 50-100kHz or so must be greater than the depth of the box metal foil plus gap for ease of detection. The consumer or commercial units can go to 10x diameter of loop.

A differential coil method is best for detecting foil passing under gap between coils. and can be made for < $10.

If you want a design service for free, use Google.

Go to any airport security and you will see oblong handheld loops or large walkthru loops that can detect a dime easily or a thin metal foil tape, but the wand must be close due to narrow loop gap.

Not the answer you're looking for? Browse other questions tagged proximity-sensor inductive metal or ask your own question.