It's possible power a small calculator with a small power extracted from the EM Atmosoherical Noise?

I'm building for a physics exhibition a small circuit able to extract from a very long cable antenna (10 meter, 20 if necessary) a tiny amount of energy sufficient to power a tiny calculator.

The circuit i've seen on the web is: 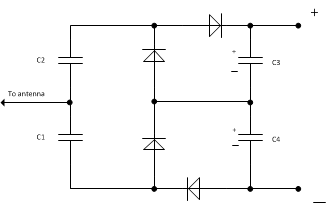 Also a extra RLC on the output as "Joule thief" is a possible additions.

My question is, this method and circuit have the potential with a single cable antenna long in the order of 10-20 meter to power a small calculator?

If yes, there are some ways for increase the efficiency of the circuit (obviously within the scope of the experiment)? For example a way to focus the system on high power frequencies as radio freq. If no, there are some ways, even alternative, to power a small calculator without direct alimentation? I accept every suggestion.

PS: No conspiracy theory thanks

@tomnexus suggests that FM broadcast might be a strong source of continuous radiation - a good place to start. I'd add TV.
So an experiment was done: a broadband RF power meter (up to 400 MHz) was connected to a dipole antenna whose length was set to capture the strongest local FM broadcast station (about 95 MHz). In the very best orientation, -20 dBm was captured from an antenna whose total length is about 1.5 m.
That's only ten microwatts.
At -20 dBm, most any diode (including germanium and Schottky) is operating in its square-law region, which makes it a very inefficient rectifier, providing DC power far below ten microwatts. Impedance converters might improve harvesting efficiency, but can only approach input power at best.
Most continuous high-power broadcasters locate transmitter sites where real estate is cheap, since large antenna structures require guy-wire supports covering a large area. Sites are often rural, far from urban "harvesters". Only if you find yourself very close to a transmitting site does RF harvesting have a chance.

It depends on if your are picking up ambient noise (which probably wouldn't give you any energy to work with). Most people pick an RF band with energy in it and then design their antenna and harvesting circuit around that.

I don't think you need that many components. I don't know what the difference is but according to Ambient RF Energy Harvesting in Urban and Semi-Urban Environments Its more of building the antenna and matching it to the circuit that counts. 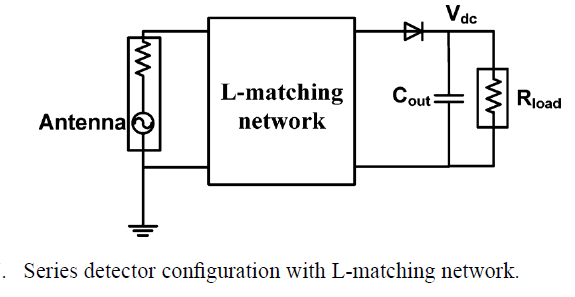 My question is, this method and circuit have the potential with a single cable antenna long in the order of 10-20 meter to power a small calculator?

Probably, it depends on the signal in your area, if your in the middle of nowhere, you won't have enough energy to power much. But in the paper the lowest band that the researchers targeted was 40nW/cm^2.

Some microcontollers only need a few uA/Mhz and run at 1.8V. So for a rough power calculation you would need 10uA*1.8V=18uW. The effiencicy was 40%, so you would need an antenna area of 1800nW/40nw/40% = 112cm^2 which isn't that big, but this was close to transmitters. And if you put the micro to sleep or had a very slow clock you could save even more energy. You would also need energy for the LCD, but LCD's require very little energy.

Get an SDR, pick a band and then start on a good antenna design.

4
low-cost idea for Identifying passive tags by inductive coupling/pulses
0
How can I tap into and measure this rf frequency?
0
Make an RF transmitter: classic transistor oscillator or VCO module?
3
Is it possible to power an arduino-like device from soil?
6
GSM/GPRS antenna noise depending on cable length and position
1
Stabilizing IR Emitter/Receiver circuits
0
Multimeter across Power Line voltage varies wildly
7
How can I deduce the power of a capacitor from its datasheet?