As part of a vintage radio restoration project, I decided to build a simple signal generator for alignment.

The idea was straightforward, a short distance AM transmitter with a variable carrier frequency in the MW band (at least 550kHz to 1.6MHz) modulated by a fixed low frequency audio tone (2kHz ). In my naivety, I decided to build the oscillators first: a JFET based Hartley for the carrier and a gain stabilized Wien bridge for the audio tone. So far, so good and both oscillators perform very well.

The JFET carrier oscillator is described here: What's the purpose of the diode at the JFET gate in this Hartley oscillator?

I thought the final step of modulating the audio tone would be simple. Boy, was I wrong. I have spent several days of trial and error with various (suitable) AM modulation schemes with very little to show. The montage below shows some of the modulators I've come across and I seem to be stumbling on the same issue with most of them: the band-pass filter! This makes sense, of course since most modulators are designed for transmission on a single carrier frequency. However, my requirement is that I can adjust the carrier across the broadcast band.

So, my question is this: how exactly do you design a modulation scheme for signal generator where the carrier frequency is adjustable?

One option I came across after I'd built the oscillators was explained (here). In this case the author varies the supply to the carrier oscillator itself which solves the problem of needing a second band pass filter as part of a separate modulator. However, I experimented with my JFET based Hartley and found that doing this led to a considerable amount of distortion (probably because the tuned circuit is at the JFET emitter).

I discovered that a major problem with many (all?) of these schemes is that even if you manage to get a half-decent AM output, when you adjust the carrier frequency you get large amplitude changes to the modulated output. It's almost like you'll need some kind of AGC control in place, even if you did manage to alter the band-pass filter in line with the carrier adjustment.

I considered using the second (smaller capacitance) section of my air variable tuning capacitor to form the band-pass that would change alongside the carrier frequency section. The result was a mess. It was too difficult to pick a suitable inductance to track the changing carrier. So, a good idea that proved difficult to achieve in practice. 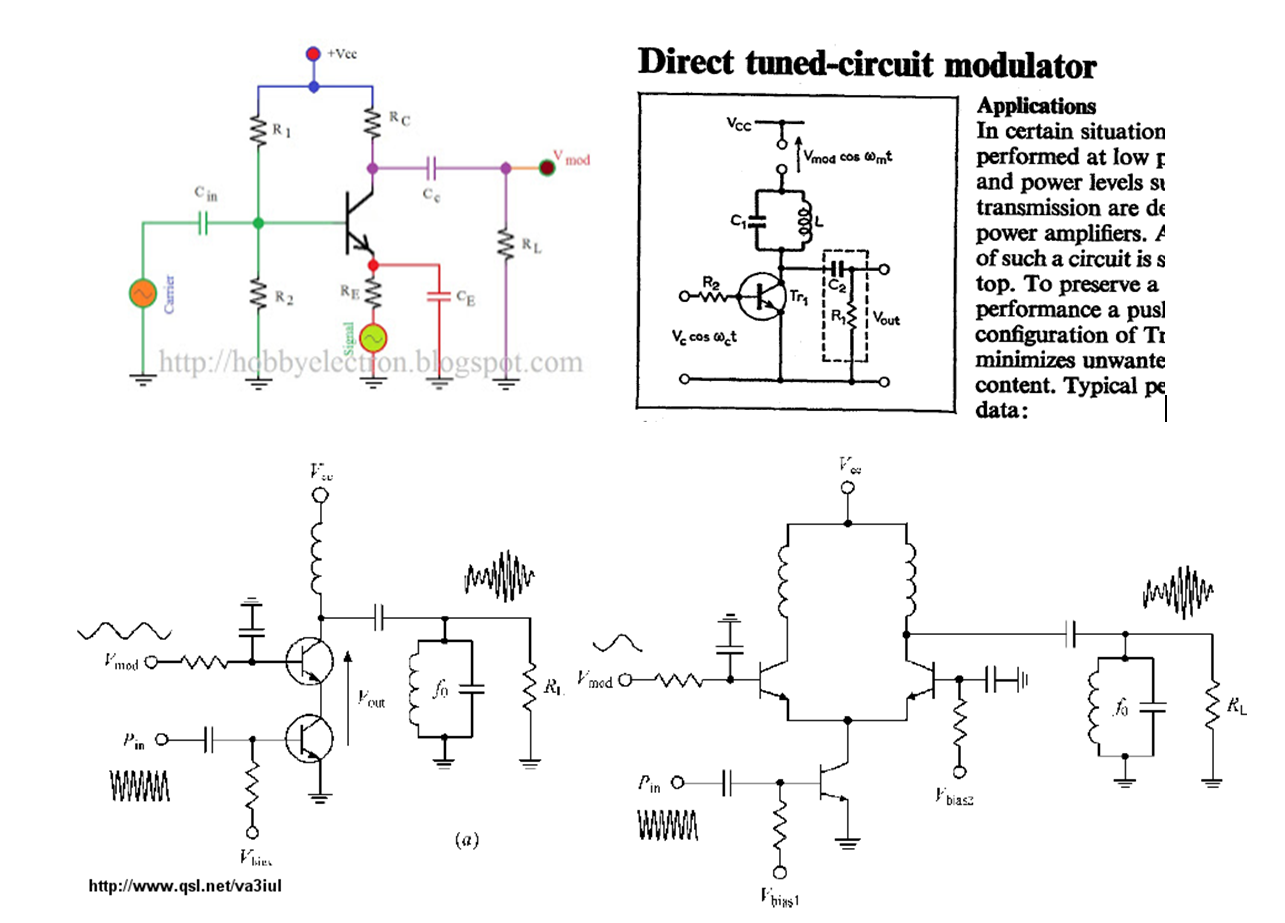 signal-processing modulation am
Share
Improve this question
asked Apr 24 '17 at 11:23

For these sort of low-ish carrier frequencies I'd consider using an analogue multiplier like an AD633. It has a small signal bandwidth of 1 MHz (3 dB down) so it will be maybe 6 dB down at 1.6 MHz. That is easily compensated for and you will get the benefits of a decent fairly linear modulation. Don't forget to add a DC offset to keep the modulation depth less than 100%. 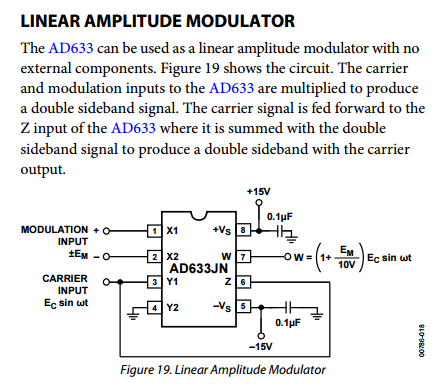 I would use the SA602A because it has a stabler temperature response and the SA602 may be hard to get hold of. It's good for well over 10 MHz from memory.

You are trying to build a AM modulator "for alignment". That apparently means the carrier frequency needs to well known and controlled.

I would use a crystal and digital circuitry to generate the carrier frequency. You can divide a crystal down to something like 10 kHz, then a PLL to multiply that to whatever frequency you want. 10 kHz is plenty good enough resolution for aligning and calibrating AM radios.

Since this transmitter will be very low power and presumably used where it won't cause interference with other equipment, you don't have to worry about harmonics much. A amplitude-modulated square wave is much easier to produce than a amplitude-modulated sine wave kept clean of harmonics.

Amplitude modulating a square wave is as simple as clipping the tops to a varying supply voltage. The result will contain significant signal at the first few odd harmonics, but those will be well out of the band of the radio you are calibrating. A little R-C low pass filtering after the modulated square wave can cut down on those a bit quite easily.

So don't worry about resonant filters and the like, since those have to be tuned to your particular carrier frequency. All you have to do is change the divider in the PLL to set the multiple of 10 kHz you want your carrier frequency to be.

The classical mixer problem (I call it classical. Noone else does.)

Let's first assume you're dealing with a perfect analog multiplier used as mixer:

So, what multiplying two cosines does is the following:

If your mixer isn't a perfect multiplier, you also get the 1 MHz fed through.

Now, the problem here is that your mixing LO spans a large range: from 550 kHz to 1600 kHz means that you can double him twice. Why's that a problem?

To produce the multiplying effect, all our mixers depend on the nonlinearity of some device. I'll abstract (and simplify) this a bit, because calculating the current gain of a transistor circuit is a bit out of scope, here.

The current that flows into the collector of a transistor is not a constant multiple of the current flowing into the base (we can only make that simplification for relatively small variations of the base current). Instead, it looks more like an exponential function.

Now, an exponential function \$e^t\$ can be represented by a series

The second term, \$t\$, just means we pass through the input.

See that \$xy\$ there! That's the multiplication we need. Awesome! It's also the "strongest component in that sum!".

Now, sadly, a filter that cuts out at 1.1 MHz can't be used to let through a 1.6 MHz AM signal! So, you'll need to switch filters somewhere. Filters aren't perfectly flat and identical, so there you get your amplitude variations.

Not the answer you're looking for? Browse other questions tagged signal-processing modulation am or ask your own question.

3
What's the purpose of the diode at the JFET gate in this Hartley oscillator?