I'm reading an old military electronics manual and there is a chapter on transformers which has some confusing information.

There is a schematic of a step-up transformer similar to this:

So it's basically just a transformer with an AC voltage on the primary and a load resistor on the secondary.

The text associated with this picture is lengthy but at the end there this paragraph:

(The text is not in English and the translation is mine. Some liberty is taken in translation but it is perfectly accurate)

But the text seems to somehow imply that the transformer forces the maximum amount of current across the load always, regardless of the resistance of the load! Clearly this makes no sense, as then we would have 50 volts and 100 milliamps across the resistor, and this would contradict Ohm's law (dividing 50 volts by 100 milliamps to get the "resistance" gives 500 ohms, which is not the value of the resistor).

No, the text is exactly right.

The product of voltage and current on both sides - power - is the same. So, knowing one current, you know the other (thanks to this relationship).

So ... do you know the primary current?

No, but you know the secondary current and it IS determined by the resistor - exactly as you say.

Now, THAT determines the primary current - it's the turns ratio * the secondary current.

(In reality there's also a small primary current, always there regardless to the load, and in addition to it - called the magnetizing current - powering the magnetic fields in the transformer)

1) yes, you can make an equivalent circuit with a 1/N^2 load across the primary instead. i.e. 10 ohms in parallel with the primary, if it was a 10:1 step-up transformer, instead of a 1K load on the secondary.

2) Yes, with no load, no current flows in the primary ... except for the magnetizing current mentioned above. Remember you're supplying it with AC : the primary is a very large inductance, which is a very high impedance.

This means you can use transformers for "impedance matching" in audio and radio circuits, as well as AC power conversion.

Here is how I view Transformer action, as of today 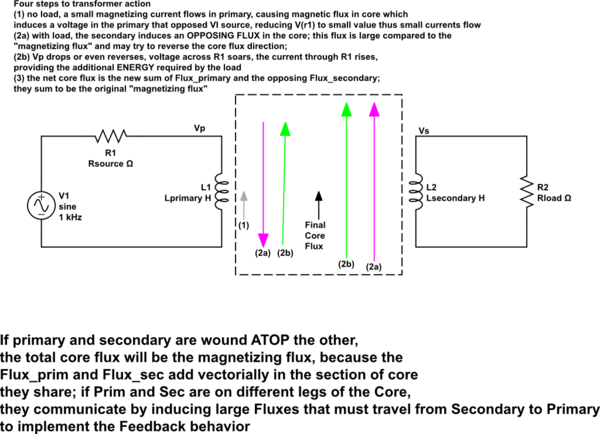 -1
Can a secondary transformer winding output too much current?