So I've got a pretty simple circuit that doesn't seem to be behaving as expected. I am unfortunately on a computer with no schematic drawing software so I scrapped together a schematic in mspaint... 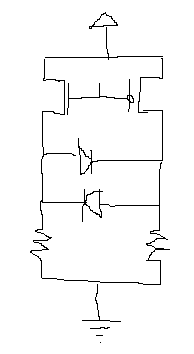 But yeah as I'm hoping you can tell, it is 2 anti-parallel LEDs being driving by 2 MOSFETs. When I connect that open wire to +5V, the NMOS should turn on and the PMOS should turn off. Turning off the PMOS should have the resistor on the right pulling one side of the LEDs to ground while having the NMOS turn on should pull the other towards +5V. Now, the LEDs have slightly different Vfs but I only wanted to use one voltage source so I made the resistors have different values. The NMOS I'm using is a fairchild 2N7000, and the PMOS I'm using is a BS250, not sure who makes it.

When I bring the Gates to +5V, for some reason neither of the LEDs turn on.

Any reason this circuit wouldn't work as I expected? Thanks

The problem is that you won't be able to turn on the NFET in your configuration. If your positive supply is 5V and your gate is 5V, then the NFET will always be in saturation. You need a large gate-source voltage for FETS to work like switches. Pulling the input of the FETs to 0V probably lights one of the LEDs, because the gate-source voltage of the PFET is 5V.

This solution will work if you have separate LEDs: 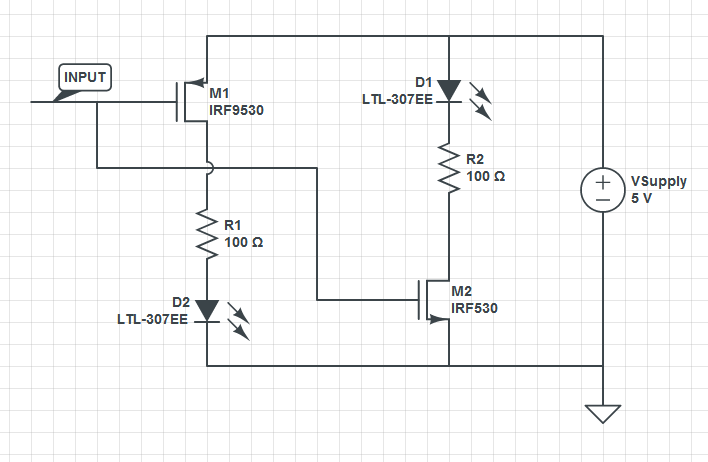 If it is an anti-parallel diode, there are still a few options. If the device driving the pin can source and sink the current needed, then you could use the two FETs to act as the opposing side of an H-bridge, as shown below. 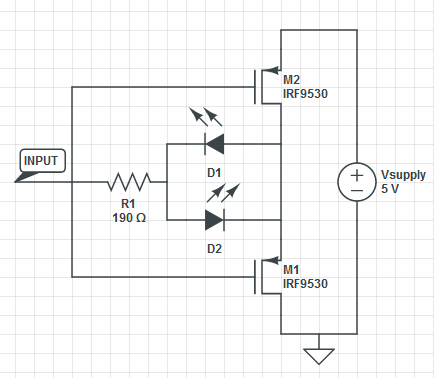 If you have an extra pin that can drive the current needed, you could just hook the LED with resistor across two pins, and this would probably give you the simplest board design. 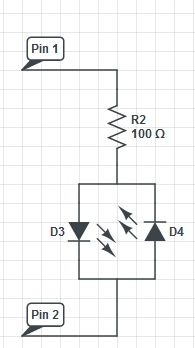 If you're not hooked on the idea of using discrete FETs, then you could consider a dual inverter chip, which would be cheap and easy to use, such as this part.

If you need to drive both LEDs to the same current (e.g. 20mA) then you will probably need a H-bridge to give you the flexibility of adding separate load resistors for each diode.

A rule of thumb for MOSFETs is that when you want them to work like switches, you need to connect the source to ground (NFET) or VDD (PFET). Otherwise, the transistor will start to turn itself off as the source voltage rises.

W5VO is right, the N-MOSFET doesn't turn on because \$V_{GS}\$ is too low; the gate may be at +5V, the source is nowhere near ground. Minimum changes will be to have P-MOSFETs both left and right, and drive one with the other's inverted drive signal. You'll need an extra MOSFET to invert the signal. 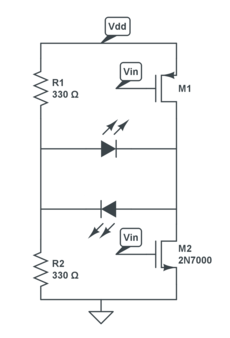 This is near the 15% efficiency of OP's circuit.

The solution is to switch off the current through R2 when M2 is on, and that's what an H-bridge does. Replace R2 by another n-MOSFET, and R1 by a P-MOSFET, and place a resistor in series with the LEDs (they can share it, only one is needed).
Of course this will double the number of MOSFETs, and you'll need an extra one to create a complement driving voltage. But it's the only solution to avoid the current losses.

As W5WO pointed, a solution can be a circuit like this: 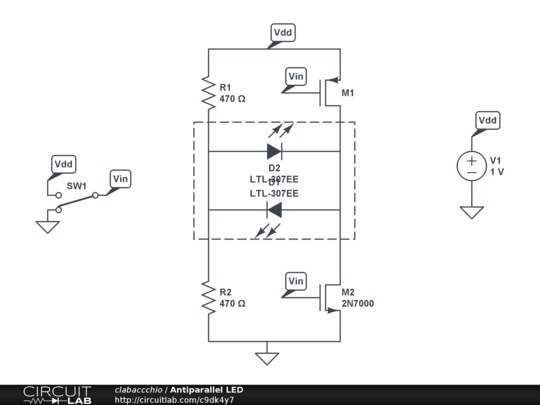 This circuit should work, though it will have a static current on the two resistors (you may consider bigger ones). One of those will be overwhelmed by the respective transistor if its \$r_{DS}\$ is low enough. But it's a sub-optimal solution.

Remember that nMOS work better for pulling down, while pMOS are better as pull-ups. This because you need always a threshold voltage between gate and source.

If you have separate LEDs, it's better to use separate circuits.

Not the answer you're looking for? Browse other questions tagged led mosfet or ask your own question.

5
Replacing two LEDs with a 2-pin, bicolor LED, using a circuit that reverses polarity based on two inputs