In the circuit below, a 555 timer produces approximately 1 pulse per second, and the CD4017 counts pulses. The initial state of a CD4017 is undefined, thus I need a reset pulse on power up. In the circuit, that is a 4.7uF capacitor between Vdd and the Reset pin, and a 10k resistor from the Reset pin to ground. 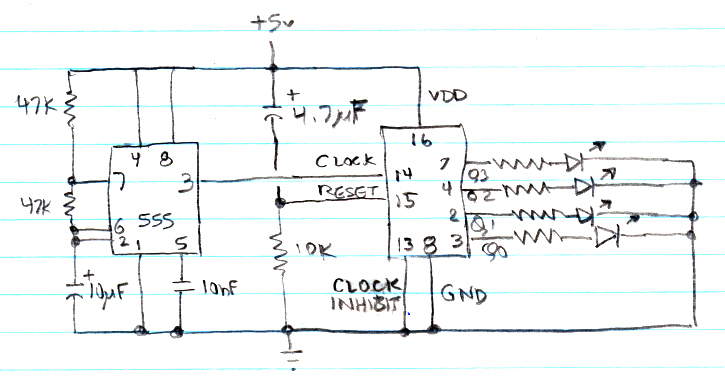 As I understand it, when the power is first applied, the capacitor has no charge. Until charged, it has effectively zero resistance, causing the Reset pin to go HI. Then it charges, giving it high resistance, and the 10k resistor pulls the Reset pin LO.

That's the theory, anyway, according to various circuits I have studied around on other sites. Since it is used a lot, I assumed it was a standard technique.

But what I see in practice is:

Confession: the indicator LEDs are not actually as I have drawn them above. I prototyped this circuit on a PAD-234A, which has eight buffered LEDs, and I just used those. One buffered LED circuit (from the PAD-234A schematic) is as follows:

Any ideas on why I see this behavior? Is there a better power-on reset for a CD4017?

The 4017 is clocked on the rising edge, and you have the clock line high when it comes out of reset.

Try connecting clock in to Vdd and the 555 output to inhibit in. Inhibit is just an inverted clock input (sans Schmitt trigger). Or add an inverter between 555 and clock in.

In general this is a really crummy reset circuit - criminally bad for anything important. Use a reset (supervisor) chip that provides a sharp fixed-length reset pulse out (eg. 200ms) and also detects slow brownouts and slow Vdd rise. They are plentiful and cheap, and designing one that is bulletproof is non-trivial.

If you insist on using this circuit, at least add a few K resistor in series with the reset input. Otherwise shorting or putting a heavy load turning Vdd off could damage the chip by discharging the 4.7uF through the input protection diodes.

Edit: Rough schematic showing supervisor chip ADM803/ADX803, you may want to add a power-on LED or resistor from Vdd to GND to help discharge the 5V faster so it resets reliably on a short power interruption.

There are three issues with this circuit.

Not the answer you're looking for? Browse other questions tagged reset cd4017 or ask your own question.

4
General circuit debugging techniques, and my 555 timer in particular