How to determine the flip-flops input in truth table

I've only one simple problem about JK flip-flops. The last columns in the following table (Flip-flop inputs). How were they genereted from the other parts on the left? Does this has a relationship with the equation: J Q!+K! Q? 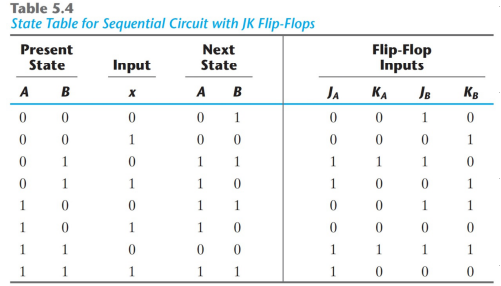 At first: The table presents a machine which has one input (=X) an four states. The number of the current state is the binary number AB. A and B are the outputs of the two JK ffs which are used as the memory devices. A and B are called "state variables" in the automate theory.

I write one of the four Boolean equations: Ja=B. You must find the rest by yourself.

The two columns under Next State are the outputs, and they are derived from the columns under Present State and Flip-Flop Inputs, the actual change taking place when the active edge of the clock pulse occurs. Note: X is not the clock, it's the input of the machine.

7
Understanding Flip Flops
2
How do I implement a simple finite state machine with 2 T flip-flops?
0
How can an SR Flip Flop be made using a D Flip Flop and other Gates?
0
D flip-flops, but no feedback loops: impossible?
0
Beginner trying to understand flip flops
0
Why use JK flip flops when D flip flops are simpler?
3
How does retiming flip flop work?
0
positive edged and negative edged D flip-flops
5
State Machine with D Flip Flops; how to deal with race conditions
3
Flip-flop vs latch: Do flip-flops have an edge detector integrated?