Ive been trying to use this schematic:

to drive relay (from this answer).

(Components are as specified in schematics, with D2 being 1N4007)

Vcc is 12V from PC standard Molex connector, DTR is from RS-232 DB9 serial port from same PC, and GNDs from both Molex and DB9 ports are connected.

I've completed bottom half of schematics (ending with T1), and wrote a simple software which does DTR ON for 2 seconds, then OFF for 2 seconds, then repeats. I've tested it (by connecting voltmeter between Vcc and output from T1) and it worked for at least an half an hour by happily alternating between 0 V and 12 V (open terminal voltage) exactly as I needed.

I left it doing this ON/OFF switching, and went to work on upper half for few hours. However, when I come back, the lower part of schematics was dead - it's open terminal voltage between T1 collector and Vcc now alternated between 12V and 10V, and if I connected some load (upper half of circuit, which seems to work OK if I connect it to power supply directly) it dropped to constant about 3.5V

I'll tear it down in few days to examine/rebuild, but in the meantime, can someone:

UPDATE At the time it was detected not working correctly, T1 or rest of electronics did not seem hot (about room temperature, maybe little higher -- of course it might have been dead already by then)

UPDATE 2 Another thing, when measuring DTR to GND on PC serial port via voltmeter, it seems voltages are -12V for OFF and +12V for ON (instead of 0V and 12V which I'd assume - however it seems valid configuration). Could that have impacted the circuit (and how to protect from it) ?

UPDATE 3 The forensics shows that the transistor T1 died (the E-C measures as 12k resistor), the rest of components are OK. Does that help find the problem? I also note that BC517 has VEBO of 10V - could that have caused the problem (the collector was open at the time T1 died)?

Never found out why the T1 in original schematics died. In the end, I've rebuilt the lower part a little different: 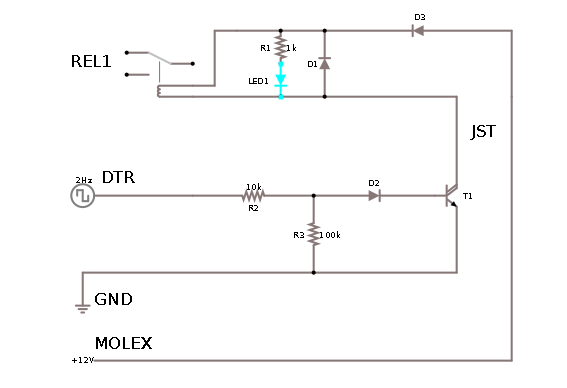 It seems to be working (both with, and without the upper half) so far with no ill effects. Hopefully it will continue to work...

Not the answer you're looking for? Browse other questions tagged relay rs232 reliability or ask your own question.

2
How can I know whether a random “known not TTL” RS232 device will work with any old random USB-RS232 converter?
0
Use of a capacitor to accomodate temporary voltage drop
2
Prevent bit-bang data-in line from back powering device?
0
Checking the voltage of serial port
2
Turning on an automotive relay when enough voltage is avaialble
3
Driving a relay with 120V AC
0
Microcontroller driving a 12 VAC relay - with as few components as possible
4
Understanding driving a relay with a transistor