Wiring a 3.5mm Audio out jack where Speakers were previously

I'm stumped on this one. My monitor has these cruddy un-amplified speakers that you can barely hear when there is any other sound in the room you are in. My solution was to wire an audio out jack to replace the speakers. Below is how I changed the wiring: 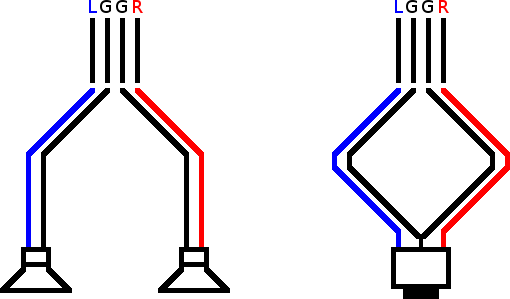 Before putting the final wiring in place I tested this configuration using my phone as the audio source connecting an aux cable with bare ends to the jack of the original cable, then plugging external speakers into the female port. Worked wonderfully. So i hook in the jack to the monitor, pack it all up, and play something on it. I get immense static over the speakers, and any volume past a certain point cuts out the audio altogether. My hunch is that twisting the two grounds together is what is causing this issue, but i'm not experienced enough with electronics to know how to resolve this.

Am I stuck with the original cruddy speakers, or is there a way to do this correctly?

EDIT: Also here is how I wired up the 3.5mm jack for reference 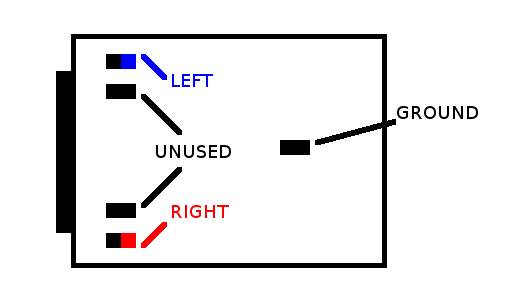 EDIT 2: I have tried isolating one channel as others have suggested, this yielded the interesting result of preventing the cut-outs from audio peaks, but the intense static remained. I've also tried reversing what I assumed were left channel and ground, and that did not work.

I guess what I'm looking for most is that my logic with this correct? can you replace a stereo speaker output with an aux jack reliably? is this just a fringe result where it typically would be a success?

Finally got a chance to wire it up how Trevor specified, still same issue, heavy static on the line through my amplified speakers, then I tried something that yielded an interesting result. in my frustration I figured I'd test the setup with a different speaker, just to see, but I only had a pair of headphones handy. I plug them in and nothing. Dead air. Through the speakers I get heavy static and distant speaking (no warble now that I've removed the two middle wires) but through the headphones I get dead silence. Maybe this is the clue that breaks the case?

You are assuming the speakers are driven with single phase and ground. That may be a BAD assumption. The speakers may be driven in push-pull mode.

Try connecting ONLY the L, and R and find a different ground.

You are using speaker level signals into a device that expects line level inputs. Of course you are getting distortion or clipping or other issues. Your device is a full amplifier and speaker pair.

The simplest method here is tapping into the monitor's audio signal before any internal amplifier circuit. If its mic level, you will need a pre-amp before your external speakers. It is non-trivial to do, but not rocket science either. Look at the pcb and work backwards from the speaker connections. You will likely find an op-amp or dedicated audio amplifier IC that you can lookup and tap into.

Not the answer you're looking for? Browse other questions tagged audio wiring speakers monitor or ask your own question.

13
Accidentally downmixed stereo to mono, why does this work?

0
MP3 Player: Disconnect 3-watt speaker from amplifier when headphones are plugged in using MOSFETS and the isolated switch on an SMD 3.5mm stereo jack
1
Mutually exclusive headphone and speaker
2
Audio Jack Sound Signal?
0
Speaker and Headphones on Microcomputer
1
Electronics Newbie - How can I mute speakers when 3.5mm is plugged into female jack? (with volume control)
0
Eliminating humming from switched audio jack
3
Why is my 5 pin switching headphone jack shorting out my circuit when I plug a 3.5mm phono cable into it?