How to test if a, in circuit, complementary darling transistor is still functioning properly?

I think a transistor broke down. My knowledge of electronics is not sufficient to solve my issue, so it seems. Hopefully some better educated mind can help me on this.

This question is about troubleshooting a PWM signal to a fan of this board (Eagle file) from Arduino pin 7 to Transistor Q4 to PWM terminal. Below is the piece of the schematics its about: 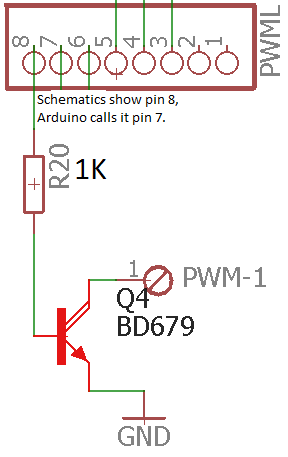 Background info (not required to read though): I've got this PCB (Ultimaker 1.5.4 from 3D printer) and I think I short circuited a fan output. It is a couple of years ago already it happened. So I am not 100% sure, I hooked up an external power supply to power the fan instead. But now I want to have the fan driven by the PCB again and not by the external power source (as the software sometimes lowers the speed or turns of the fan completely, depending on what is printed). Anyway, currently it is not working to drive the fan by the PCB. It is driven by an Arduino Mega 2560 by a PWM (so says the PCB) through a BD679 FROM ST, which apparently is a complementary darlington transistor. I've only got some experience with MOSFETs and known that when the gate is driven by a voltage too high, the resistance between some pins become practically 0, meaning it broke down. Or they just exploded and it was very obvious what broke down.

Info of measurement: Looking at this datasheet. and a multimeter I read the following on the pins of the BD679. Resistance E-C=unlimited C-B=unlimited E-B=9.19kOhm

Question: Do you think that these are normal readings for this complementary darling transistor?

Browse other questions tagged resistance troubleshooting darlington or ask your own question.

9
How do i test capacitors?
4
Switching Boost Converter only works while probing with o'scope?
8
How do I check a BJT transistor if it is still functional?
0
Darlington Transistors ULN2003APG Base Voltage
0
arduino current
2
AC motor speed controller (via frequency)
1
ways to control resistance by microcontroller
0
What is the resistance of a low-pass filter
1
Complementary transistor pair with a bipolar transistor and a MOSFET