Before asking my questions I would like to write down briefly about my big picture understanding so far. I will go with an example RLC circuit below:

Since all is in series the same current I(s) passes through the components, this circuit can be treated as a voltage divider. So by using relevant Laplace transforms, the voltage across R which is Vout can be written in terms of Vin as:

So the transfer function H(s) can be simplified as:

Now that we have the transfer function, we can find the response of this circuit for a given input in s domain and then transform it by taking inverse Laplace transform to plot it in time domain. One can also find the location of poles and zeros on the s plane.

Before that, first I will start with a step response of this circuit in LTspice to estimate the impulse response in time domain which is the transfer function. Impulse response of an LTI system in time domain is the transfer function. Since I cannot create a real Dirac function I apply a very sharp rising edge step input and see the response in LTspice. I also do the same thing by using MATLAB in s domain.

Since step input X(s)=(1/s) in s domain, the output can be written as:

And below plots shows the same result is obtained by using LTspice and MATLAB:

Ok so if we look at the above plots we can see that the circuit response to a sharp step input is a decaying sinusoidal with f=50Hz(ω = 2*pi*f= 314), in other words damped oscillation at a particular frequency.

Now the reason for the question I’m going to ask is about some observations or the relation between the transfer function and the time domain response.

First of all here is the 3D plot of |H(s)| of this circuit above the s plane: 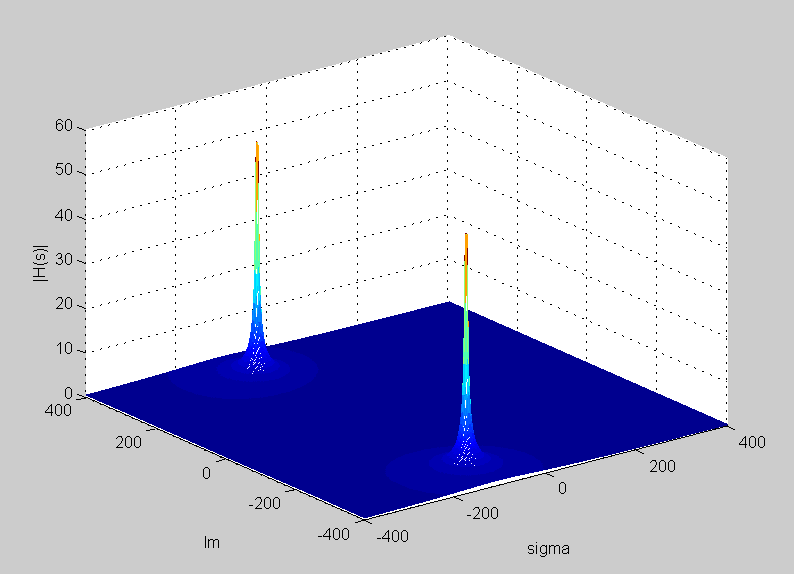 At this point, from the transfer function H(s) = sR / (s^2*L+sR+1/C) one can already determine the two poles and the zero locations on the s plane.

First I look at the |H(s)| vs imaginary axis as below: 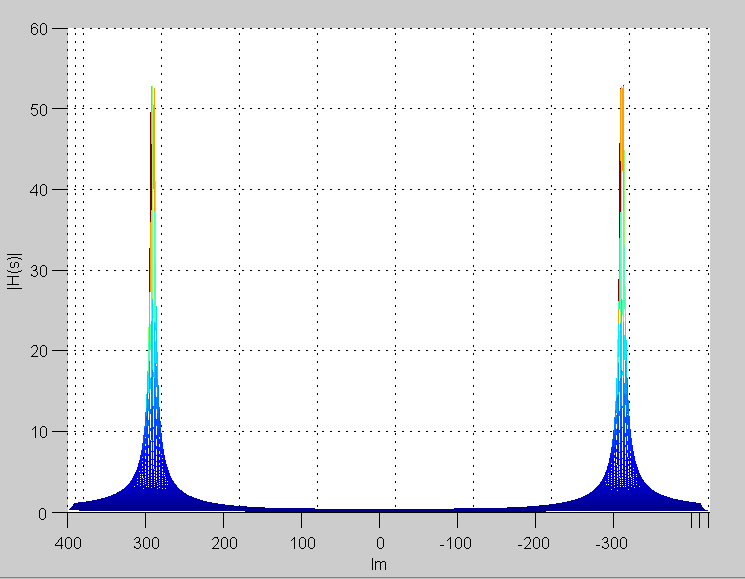 My first observation of the transfer function of the plot above is that the location of the poles are where ω = 314 on the imaginary axis. This value of the ω is exactly the same when we observed the step response or natural frequency of the circuit where it damped with an oscillation at ω = 314. So I think what pole’s imaginary part indicates is the impulse response’s frequency. Is that correct?

Second is that, if we look at the real axis which is σ axis of s=ωj+ σ plane as follows: 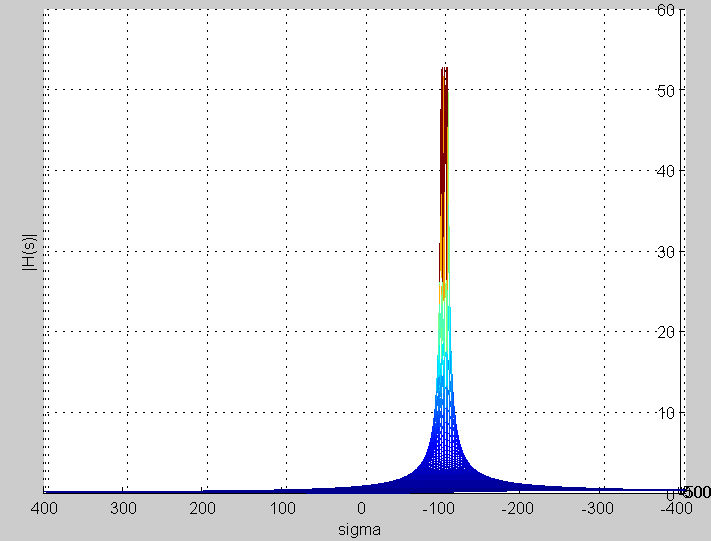 And as seen above, σ for the point of the pole is around -100. I think this negative sign indicates the decay rate of the sinusoid as e^-100. Is this correct?

And here is the top view of the s plane: 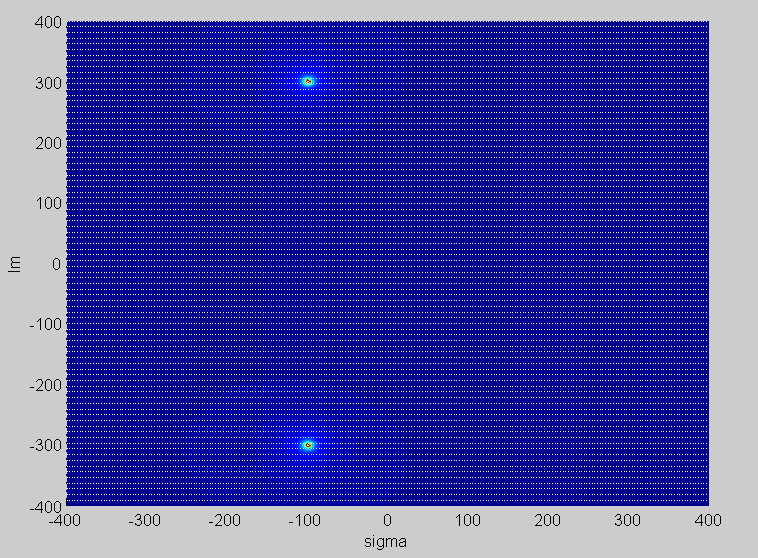 Now regarding these observations so far,(if you agree with them) my questions are as follows:

Yes you are basically correct with your observations.

So I think what pole’s imaginary part indicates is the impulse response’s frequency. Is that correct?

Yes. Laplace transform is a tool to solve the differential equation that arises from your system. If you put in an input function (also transformed into Laplace domain, in this case a step function, that corresponds to 1/s), then you obtain for your output signal in the s-domain. Do a backwards Laplace transform to see the actual time-domain function. Thereby the real part of the pole-location corresponds to the damping factor, the number in the exponential term. The imaginary part of the pole corresponds to the omega in the sine/cosine part of your time domain solution. So we have the answer to your next question:

So I think what pole’s imaginary part indicates is the impulse response’s frequency. Is that correct?

I think this negative sign indicates the decay rate of the sinusoid as e^-100. Is this correct?

The questions in the end have a slightly longer answer: 1. Again, put in a L-transformed input signal of arbitrary time-domain function and look at the solution. Transform back and you'll get a function that corresponds to the time-domain solution. In case you look at a system of only a sine/cosine function as input (that has been there very long, not only starts at t=0) you can rather use fourier transform. Then you will get three kinds of information: First, the output signal will have the exact same frequency as the input signal. Secondly, the signal amplitude is what you get and the third information is how much phase-shift you have. This means, you put in a sine and get a shifted sine by some fixed angle phi for a fixed input frequency.

3.No, you're mixing stuff up here. The poles are not diracs. They are just values for s, where the transfer function has zeros in the denominator. Look at the table here, equation 19: the pole of this equation is here: $$ (s-a)^2+b^2=0 \Rightarrow (s-a)^2=-b^2 \Rightarrow (s-a)=ib \Rightarrow s=ib+a $$ This means, if the output function (the solution to your problem) is as eq 19, you get the exponential decaying sine as solution in the time domain.

The Laplace transform is just another way of solving a very special kind of ordinary differential equations (odes): linear differential equations with constant coefficients. Another presumption is that your input signal is 0 for t<0. If these criteria are met, you can solve an ode algebraicly, that means you only need addition, subtraction, division and multiplication. This is oftentimes easier than solving an ode with other methods (separation of variables, varying constants, arbitrarily complicated stuff). This means you transform your ode, use +-*/, and transform back.

Edit: Use your transfer function and multiply by 1/s. This will give you something like $$ \frac{1}{s^2+as+b} $$ Transform it back and you'll see that it is exactly as you expected.

It is not that you evaluate the s-function somewhere or calculate "what is F(s) at point s1 (somewhere), and what does this tell me?" That is not the question you ask. There is no thing like "the point s1 corresponds to the output value at t=1.2sec" or something. And this makes perfect sense: you are usually basically dealing with polynomials divided by other polynomials with respect to s. And the poles and zeros are all you need to fully describe the function. (Interestingly this rises the question, what happens if I have a function like log(s) or something even more crazy... it translates into something in the time domain, that does not consist of "normal" e,sin,cos functions, as far as I think about it now. In this case talking about poles and zeros wont be helpful anymore, because then those do not describe the s-function fully anymore). You always have something like:$$ \frac{1}{(s+1)} (transform sign) e^{-1t} $$ The notion $$ \frac{1}{(s_1+1)}(transform sign)? $$ does not make sense. Its always the function as a whole that is transformed. In case you're banging your head against the wall because I still don't seem to get what youre actually asking, I am sorry.

Not the answer you're looking for? Browse other questions tagged transfer-function passive-networks laplace-transform or ask your own question.