How to partially drive a load with respective impact on my electricity meter?

I want to optimize the use of my photo-voltaic production by redirecting the remaining unused energy to electric heaters in winter, or something else in summer (given that fans are inductive loads and would make the problem worse). Note due to the (insulting) comment below: I obviously do not want to waste energy uselessly! My panels covers at most 75% of my needs, so I do have a use for the energy I produce cleanly!

The question is how to drive variable loads in such a way as to achieve a near-zero net meter reading. To be clearer if I can: if my smallest heater is 1000W, and the remaining power I have from my panels (after driving whatever I could fully) is 800W, then I want to feed them to the heater, without having to pay for the "missing" 200W. The net energy shows zero, and I am fully using my solar grid.

Until now I only used on/off modes. I compute the best combinations of heterogeneous heaters to use my production in the best way. This is a classic packing problem, and the effect is easy to understand on my electricity bill.

But when the solar production is lower than the smallest load I have (<800W), then my best option is to give it for free to my electricity provider (which resells it to my neighbors... huh). Else I would be paying by importing energy.

So I need to be able to drive loads more gradually and have my energy meter integrate the kWh correctly (from my viewpoint!).

Skip half mains cycles: would it really improve my bill?

I could skip half mains cycles by driving a TRIAC or a solid state relay thanks to a Bresenham algorithm (i.e. switch it on only for N half-cycles out of each repeated M half-cycles).

But I doubt that such uneven AC waveform use would work on my electronic meter. May be it would if it was integrating my need over a significant time interval, like the old spinning disk meters.

Instead, I suspect that every peak I use would still overshoot my instantaneous production, count as an import of energy, and be detected as so (which is fair). But during the cycles I do not use I would again over-produce electricity for free, back into the public grid.

Switching the load at high speed (chop the AC)

I can otherwise rely on a much higher switching frequency (e.g. hashing the 50Hz AC waveform with a 100KHz PWM). Technically, it should still be fairly easy with a microcontroller and a TRIAC.

But still, I wonder if the electricity meter would count it the way I would like. As a side note, even with a zero-cross detection, would I pollute the mains with electromagnetic noise (even for resistive loads? my micro-inverters are quite sensitive to noise on the AC waveform and may shutdown as a protection!).

Still in order to use my excess of energy, as measured by my electricity meter, I could also try and drive the heaters with variable voltage instead of chopped AC.

It may be the only real way to have the electricity meter behave as I expect (instantaneous P=UI ?). But I have no clue how to do this with loads up to 2KW . Would adding high power coils smooth the chopped AC waveform?

So far my weirdest idea would be to try and add a servomotor to set the potentiometer of a 4KW AC motor controller in order to drive my heaters... but this sounds like a bad idea :D

OK... since you are on the grid, having batteries would be a waste of money, so I suppose you have no batteries.

The answer to your question likely depends on your solar UPS, so check its manual for a feature that would do what you want, and post a comment.

Failing that, the problem is likely to be very complex. If the UPS does not cooperate, then you'd need to measure the power draw for the entire house, combine that with the solar power data, and use some sort of controller to switch your loads.

If you have a very long mains cable between your house and the transformer, then voltage might be an approximation... then again maybe not.

Instead, I'm gonna go on a tangent...

Let's say you got a refrigerator and a freezer. If you put a few bottles of water in there (or more high-tech phase change materials) then you can store cold. A simple timer will then let the freezer/fridge run only during the day, so it runs on solar instead of mains.

Same for your water heater.

I mean, it's a super dumb solution. Timers don't know if the weather is sunny or cloudy... but if the appliances are switched off at night, at least they have a higher chance of running on solar. The total amount of energy used won't change much.

Since you are aiming to save money here, you gotta weigh in system cost and complexity. A pair of $5 timers has very little chance of being a bad investment...

I mean, if you can usefully employ, say, 1kWh per day instead of giving it for free to the electrical provider, you're looking at something like 5 bucks a month. Always good to have, but not something worth spending lots of time, energy and money achieving.

A part-cycle TRIAC chopper like a light dimmer should work fine for the purpose of providing a variable load to soak up your solar power. You're still using the grid as a flywheel, but you will get the correct net benefit on your electricity meter.

Remember all power meters offer net-metering over a short time. Power flows both ways, in each cycle. If your power factor is not 1.0, or if you have harmonics, there are parts of the cycle when the power flow is outward. 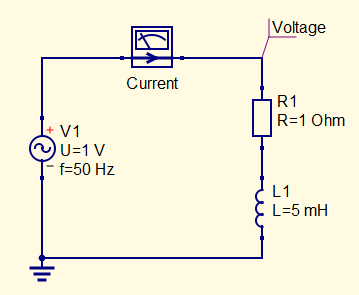 Here are some graphs of the voltage, current and power flowing in the circuit, over time:
[ 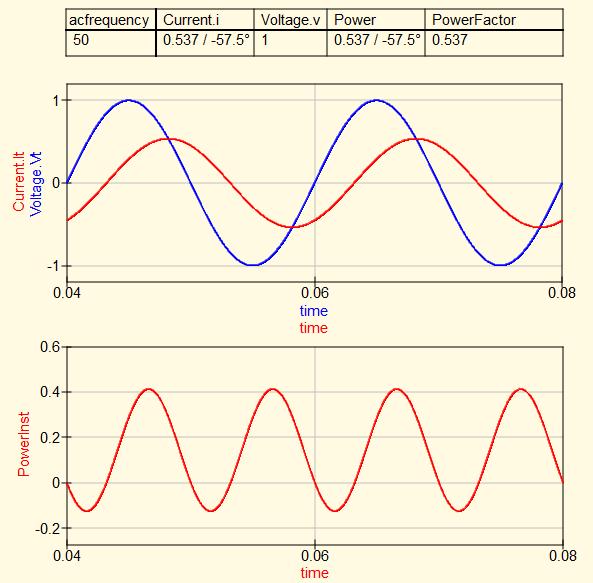 You can see that for part of the cycle, the power flow is back to the source.

An electronic power meter calculates the instantaneous power, perhaps 1000 times per second, and must integrate for at least a full cycle, 20 ms, before adding the total consumption to your bill. A mechanical power meter does the same calculation mechanically (and will probably run backwards, at least for part of a revolution).

Last thought on this is that a TRIAC type chopper creates plenty of harmonics, these can be filtered out or at least attenuated with an LC filter, resonant at 50 or 60 Hz, leaving you with a clean, reduced power draw of your choice.

Not the answer you're looking for? Browse other questions tagged mains load solar-energy optimization power-meter or ask your own question.

4
How to control power to a water heater
5
Leach circuit to power microcontroller
1
Is this a good inverse parallel SCR drive circuit?
0
Three 1 phases vs one 3 phase power cost
0
Does a common neutral between solar inverter and utility affect current measurement?
1
Fake energy saver inductive loads
0
How to limit power going into a resistive load originally connected to AC mains
1
What device can I use as a load to calibrate a power meter accurately?