Edit, answer: I managed to figure it out with help from passerby's answer. I needed a pull down resistor for the PNP transistor. Here's the final schematic: 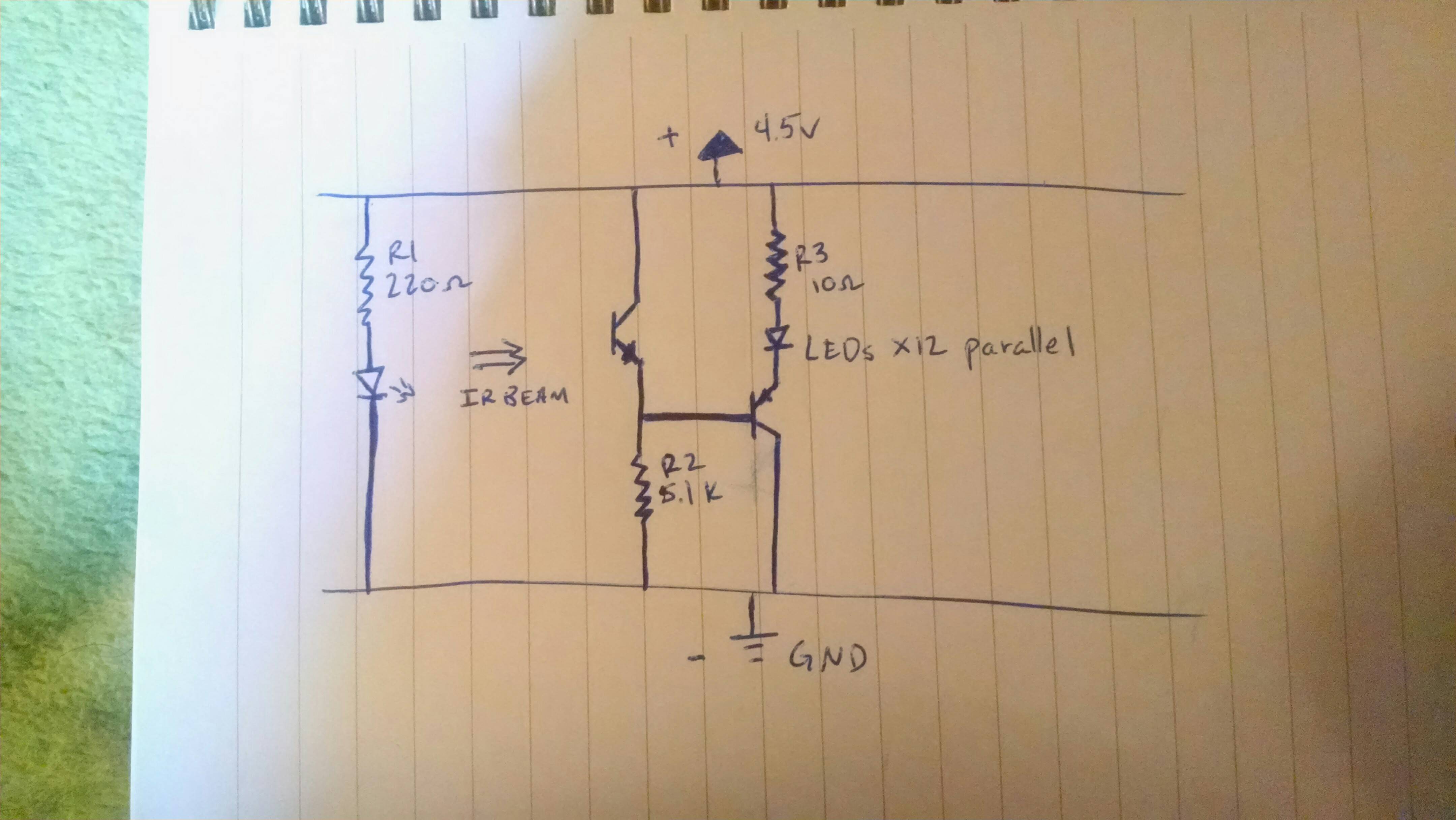 When the beam of the photo interrupter is unbroken, the LEDs are off, and when you break the beam the LEDs come on.

I'm making a money checker, to check for the existence of a security strip in US bills. My project will use UV LEDs, but for the sake of brevity here I'll just call them lights.

Basically, I'd like to build a circuit, without a microcontroller, that turns on the lights when the beam from the photo interrupter is broken. My understanding of them is that the IR detector is a phototransistor which allows current to flow when exposed to IR light, and blocks it when not. Could I use the output of the phototransistor into the base of a PNP transistor to turn on the lights? Again, my understanding is that with a PNP transistor, current at the base blocks current through the connector-emitter, so I could put my lights in series with C-E of the PNP, and the base of the PNP to the C-E of the phototransistor, right? The idea is that when I place a bill in the slot of the photo interrupter, the lights will turn on, and when I remove it they'll turn off. If I've figured this right in my head I shouldn't need much more than what I've mentioned plus a few resistors, right?

I'm on a phone right now, and I don't have internet at home, so I can't make a schematic.

Edit: I'm not sure how I could make what I'm asking any clearer. I want to turn on some LEDs when the beam of a photo interrupter is broken, without using a microcontroller, all of which I stated in my original text... Here's a picture of a hand-drawn schematic... 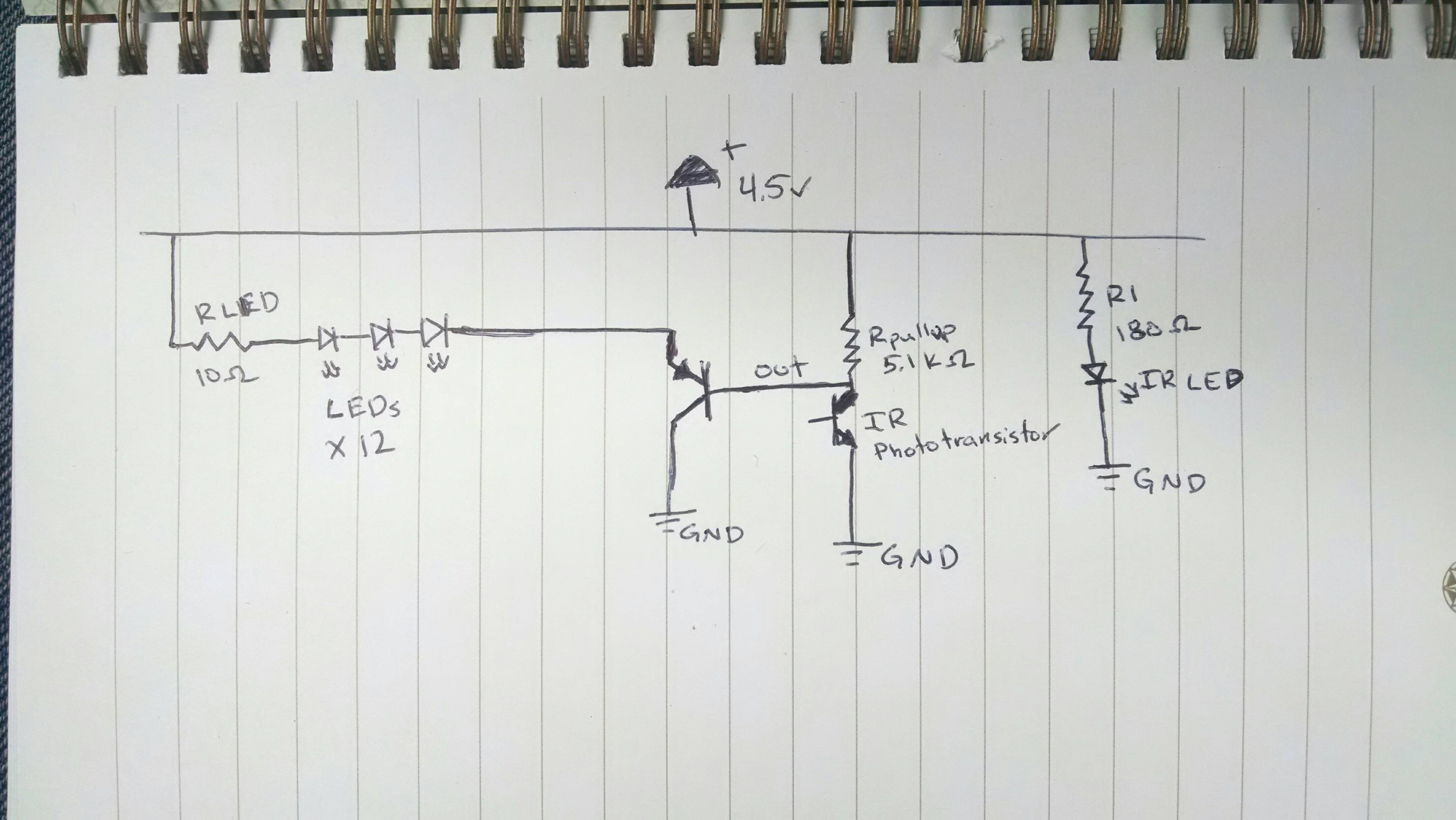 I've calculated that with a 3.2Vf drop across the UV LEDs, and 12 in parallel (I know I messed that up in my schematic), I'd need a 5.416 ohm resistor to get 20mA each. If I up the resistance to 10 ohms, I'd get a bit over 10mA each and have 169mW dissipated in the resistor. The 180 ohm resistor is to limit the current of the 1.2Vf IR LED in the photo interrupter to a little less than 20mA. The only thing I'm unsure about is the pull up resistor.

Basically yes. An opto sensor like an IR encoder works exactly like you think, but your wiring may change. Also, a dollar bill is fairly see through so it may not work. 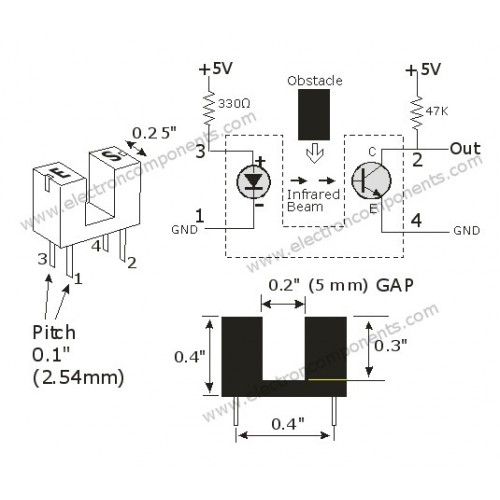 What it seems you want to do is possible, although it's not clear how exactly you proposed to hook things up.

Keep in mind that the phototransistor in the opto-interruptor will go off when the light is blocked. You need to invert that if you want to turn something on when the beam is interrupted.

Here is the schematic you have now finally shown:

No, that won't work. This also illustrates why it's essential to show a schematic instead of a vague verbal description.

As I warned you above, the phototransistor in the opto will be off when the beam is interrupted. That means it's effectively not there, and the base of the PNP (next time draw the schematic right, including component designators) will be held high by the pullup resistor. That means the PNP will be off, and the LEDs will be off.

Another problem is that 12 LEDs in series need a lot more than 4.5 V. The lowest voltage visible LEDs are red, with about 1.8 V drop when lit. 12 of those require nearly 22 V to light.

For example, let's say you want to light 12 green LEDs. Those usually have a drop of about 2.1 V when lit. Figure the (now NPN) transistor will drop about 200 mV when on. That leaves 4.3 V for the LEDs and resistors.

You could put two LEDs and a resistor in series, then six of those assemblies in parallel. At 2.1 V per LED, two drop 4.2. That leaves only 100 mV for the resistor. Let's say you are aiming at 20 mA LED current. That means the resistor would need to be (100 mV)/(20 mA) = 5 Ω. However, that leaves very little slop for part variation and to ensure no maximum is exceeded. Start with 10 Ω and see what you get. If you use a LED color with lower drop, then there is more voltage left for the resistor to regulate the current better.

Yet another problem is the current required by the LEDs. With six strings of LEDs, and let's say 20 mA per string, that means the transistor has to be able to pass 120 mA. A small signal transistor can do that, but you need to feed it enough base current. Let's say you use a transistor with a guaranteed minimum gain of 50 at this operating point. That's not hard to find. That means it needs at least (120 mA)/50 = 2.4 mA base current. Figure the B-E drop is 700 mV. You are starting with a 4.5 V supply, so that leaves 3.8 V across the pullup resistor when the LEDs are supposed to be on. (3.8 V)/(2.4 mA) = 1.6 kΩ. That's the absolute maximum pullup resistor you can use given these example values. You want to make sure the transistor is really in saturation, so a 1 kΩ pullup would be a good value.

Now you have yet another problem, which is to make sure that the opto output can sink the pullup current when on. With a 1 kΩ pullup and figure 200 mV saturation drop for the optotransistor, it must sink (4.3 V)/(1 kΩ) = 4.3 mA. Check the datasheet to make sure the opto can drive that. If not, you need a different overall circuit topology, or relax some of the other constraints. One obvious constraint to relax is the number of LEDs you have to drive.

You have now revised the schematic to:

This won't work as you intend. This version does not fix several problems pointed out with the previous version, both the circuit and the schematic. See above.

Not the answer you're looking for? Browse other questions tagged led phototransistor or ask your own question.