I need some assistance on building a high gain amplifier using only BJTs, capacitors and resistors. I have made some before using op amps, but for this assignment I am not allowed to use Op Amps at all.

The amplifier has to be capable of providing a voltage gain of at least 1.5k V/V. We can use any value we want for the resistors, capacitors and input.

Here I attach a Multisim simulation of what I have so far:

If you can see at the end, I am able to get a gain of 1.5k, but my instructor says that I am using too many parts for it to achieve that. He said that I have to take away a lot of resistors and capacitors for it to be ok, or to use current mirrors or a differential amplifier and cut the number of components I am using. And this is the part I need help with because I do not know how to achieve that by my own.

Any advise would be gladly appreciated.

Here's an answer that will achieve at least a gain of 1500 from just one common BJT. Details about the design below will, I think, make a clear example out of why you would not design one like this. But your instructor wants just a few parts and doesn't seem to care about anything else. So: 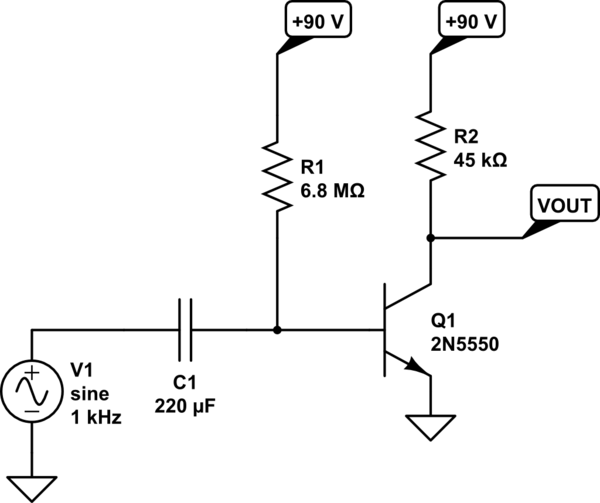 I've used a 2N5550 because it can tolerate the required higher \$V_{CEO}\$ needed here. I've used a single \$90\:\textrm{V}\$ power supply so that I could get the necessary gain. I've assumed that \$Q_1\$ operates at room temperature and since it will only experience less than \$50\:\textrm{mW}\$, it probably won't be any higher than perhaps \$10\:^\circ\textrm{C}\$ above ambient, anyway. Not enough difference to matter here.

The design follows this logic:

I probably should have used a different BJT to keep this simpler, but this illustrates an issue regarding some BJTs. These two values may vary a lot, but it usually works out that they don't combine to create such a difference.

The 2N5550 is one of the weird ones in this regard. It's adjusted \$\beta\$ varies more substantially over collector current than is common and its effective \$\beta\$ isn't what you'd imagine if only looking at one of its spice parameters.

From the above, I know that:

That completes the design.

Test it out in spice using an input source with no more than \$3\:\textrm{mV}\$ peak. Unloaded, the output should be about right, I think. Here's a model:

(For high gain arrangements like this, by the way, there is also a small effect called the "Late effect" which might impinge. But I think the effect is likely small enough not to seriously impair the predicted gain.)

So that's what you get without any specifications to speak of.

Given current source loads, you can reach these gains in 5 or 10 volts. The only challenge will be stability of operating point. Opamps use these methods, achieving Open Loop Gains of 10^5 or 10^7 or higher, and depend on external feedback to precisely define the gain. 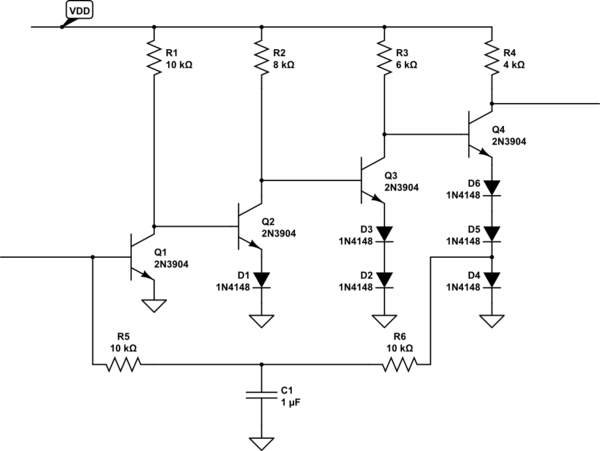 Not the answer you're looking for? Browse other questions tagged amplifier bjt gain current-mirror diff-amp or ask your own question.

0
Amplifier gain too HIGH?
2
How can I decrease noise while maintaining bandwidth and gain in my Transimpedance amplifier
2
Amplifier output goes haywire with load attached
0
Closed-Loop Voltage Gain of Circuit Problem
0
How to design voltage gain circuit?
3
Need help in designing a BJT Amplifier with Avnl = 100
0
How to set output resistance of an amplifier to be 50k